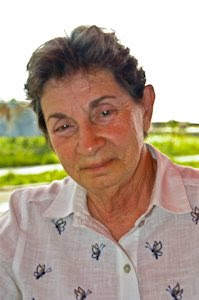 The New York Times
María Elena Ibarra Martín, director of the Center for Marine Research at the University of Havana, a co-founder of the Cuban Society for the Protection of the Environment and a leader in Caribbean marine ecology, died on May 5 in Cuba. She was 76.

Her death was confirmed by Orlando Rey Santos, director of the environment directorate at Cuba's Ministry of Science, Technology and the Environment.

Dr. Ibarra was born on Dec. 27, 1932, in Santiago de Cuba. She joined the faculty of the University of Havana in 1964 and eventually rose to become dean of biology. After early research on plankton and related marine organisms, she turned her attention to crocodiles, manatees and especially the turtles of the Caribbean, and to measures to protect them.

"She was the quintessential scientist-activist," said Oliver Houck, a professor at Tulane University Law School who went to Cuba in the 1990s to help draft environmental legislation. "She did not back down."

The World Wildlife Fund describes Cuba's marine habitats as well preserved, in what it calls "dramatic contrast" to its Caribbean neighbors. Researchers who study its marine ecology attribute its relative health at least in part to Dr. Ibarra.

Working at the marine center with very limited resources, Dr. Ibarra and her colleagues "created a hell of an agency out of nothing," Professor Houck said.

OceanDoctor.org
Cuba has lost its Mother Ocean. Dr. María Elena Ibarra Martín, director of the University of Havana's Center for Marine Research (Centro de Investigaciones Marinas, CIM) since 1981, passed away yesterday afternoon after a month-long struggle following heart surgery. CIM is the only academic institution in Cuba where marine biologists are trained, and her loss is mourned by hundreds of her students, many of whom grew up to become her colleagues — and friends. Her selfless, tireless dedication goes far beyond words, and the impact she has made on education, conservation, and her unique model of personal integrity will no doubt endure for centuries to come. When I last saw Doctora in February, she was as busy as ever, wrestling mountains of paperwork on her desk while never letting go of her visionary perspective about conservation and education. Nor did she ever let go of her special fondness for sea turtles and her love for and dedication to her students.

I first met Dr. Ibarra in 2000 while I was Vice President at Ocean Conservancy (OC), and the work we have done together has continued to blossom nearly nine years later (now under the auspices of The Ocean Foundation). During the summer of 2003, I nominated Dr. Ibarra for the "Local Hero" section of OC's magazine, Blue Planet Quarterly to honor her many contributions to marine science and conservation. I can still remember the challenge of convincing her to allow me to write the article. She was always uncomfortable with accolades and recognition, and in this case she tried to encourage me to write about the institution and students rather than her. She complied only when I convinced her that the article could help her students by bringing recognition to her institution. And to snap the photo above required inviting her out to a local cafe for refrescos, then quietly pulling out the camera and engaging in yet more negotiations. Thankfully, she finally complied.

I managed to track down a copy of that article and I believe reprinting it here today offers the best way I could pay homage to this incredible woman:

Despite numerous setbacks and hardships, Dr. Maria Elena Ibarra Martin has advanced marine science and conservation in Cuba with an unwavering will.


It was called the “White Hurricane,” the “Storm of the Century.” The freak 1993 winter storm paralyzed each city it passed, from the Gulf Coast to New England. But before the first snowflake ever fell in the U.S., the storm was already well-known by Cubans. The monstrous waves of “La Tormenta del Siglo” assailed Cuba’s north-facing shoreline, destroying the University of Havana’s Center for Marine Research (Centro de Investigaciones Marinas, CIM). It was a devastating loss for marine conservation since every marine scientist in Cuba is trained at the Center. Fortunately, Dr. María Elena Ibarra Martíin, CIM’s director since 1981, was not about to let a little thing like the total destruction her Center stop her from her life’s mission to train the next generation of marine scientists and advance the conservation of Cuba’s environment.

“Maybe for you in the U.S. it would be nothing to rebuild a building, but here in Cuba, it is the work of a giant,” said Dr. Gaspar González Sansón, a professor and biologist at CIM and its former vicedirector who was a student of Ibarra more than 35 years ago.

The task was indeed daunting, occurring during Cuba’s “Special Period,” the economic nightmare left in the wake of the Soviet Union’s sudden demise and withdrawl from Cuba. But thanks to Ibarra’s trademark persistence, the Center was rebuilt just a few blocks away. Together with its wellspring of students, CIM stands as a monument to a woman with a vision who simply won’t take “no” for an answer. “She built an institution that has endured the good and the bad; it is well-known, with respect from all over the country,” says Dr. Rogelio Díaz-Fernández, CIM biologist and chief biologist for its Guanahacabibes sea turtle project (see Where Conservation Meets Education, inset below).

Today, CIM teems with approximately 40 postgraduate students and more than 200 undergraduate students. Thanks to Ibarra’s leadership, the profile of marine science in Cuba has been elevated dramatically over the past 30 years. The Center maintains strong ties not only with other Cuban institutions, but has built strong international ties to universities and nonprofits abroad, including The Ocean Conservancy.

With Ibarra as its matriarch, CIM feels much more like a family than a university. Its faculty consists of many of her former students, and the next generation of students already appreciates Ibarra’s passion and selfless dedication to her students above all else. She breaks bread at the same table as her students and sleeps in the same room when in the field. She has even refused coffee if there was not enough for her students. Her students love her, admire her and draw great inspiration from her.

Daylin Muñoz Nuñez, a student of Ibarra’s who graduated in 2001, continues to take classes from the woman who is her role model. “She pays attention to everybody. You don’t have to be a doctor or an experienced person. She pays attention to young people, too.” Fellow student Julia Azanza Ricardo, who recently completed her Master’s, is equally inspired. “She’s a woman of great ideas with a lot of energia. When she has an idea she always has a way to accomplish it.”

At 70, Ibarra’s impossibly packed calendar belies that she is 15 years past the recommended retirement age for women in Cuba. Among her myriad of accomplishments, she helped found the Natural Botanical Garden of Cuba, is Professor Emeritus at the University of Havana, and was president of the Cuban Zoological Society for 16 years. She co-founded Pronaturaleza, the Cuban Society for the Protection of the Environment, and since 2000 has been its president. “Prior to its establishment in 1993, Cuba had no organization whose main goal was to address environmental issues in Cuba,” says Ibarra. Under her leadership, the organization is a major conservation force in Cuba.

Ibarra attributes her inspiration for education and biology to her parents. Her father ran two private schools in Santiago de Cuba, and her mother was a professor of natural science. Ibarra moved to Havana in 1950 to pursue her studies at the University of Havana, but the strikes against the Batista regime left the universities closed, so she returned to Santiago to teach natural science in her father’s schools. After Fidel Castro took power in 1959, she returned to Havana and worked at the Cuban Institute for Petroleum. Following the revolution, there was a severe shortage of teachers, and the government sought volunteers to teach. She jumped at the opportunity, and taught nights at Havana schools. In 1964, she joined the faculty of University of Havana, where she eventually became Dean of the Faculty of Biology, a position she held until taking the reigns at CIM in 1981.

The years have taught her that it takes more than biology to achieve conservation, and she’s intent on seeing that her students’ training reflects this. “Economic, social, cultural, and political issues are all factors. Nowadays, this information is entangled for any university graduate.” She welcomes students from other disciplines, hoping to build environmental awareness in the undergraduate students of engineering, architecture and economics who work shoulder-to-shoulder with her biology students on the Guanahacabibes sea turtle project.

In Cuba, Ibarra faces a daily fight to keep the lights on – literally. “She barely finishes one battle and another begins,” sighs Díaz. Despite the obstacles, Ibarra remains undaunted. Through her determination the Center not only endures many hardships, but continues to grow.

Ibarra is admired internationally as a leader, a director and a visionary. But she will be always be a teacher first, something her legion of loyal students feel intensely. “Sometimes I call her ‘doctora,’ but I prefer ‘profe,’ [professor]. I will always be able to learn from her,” says Muñoz, “For me she is an example…I would like to be like her some day. She is persistente. I think she’ll never give up.”

Exemplifying Dr. María Elena Ibarra Martín’s vision for combining conservation and education is CIM’s sea turtle conservation project at Cuba’s Guanahacabibes Peninsula. For the past five summers, hundreds of students have participated in the grueling task of monitoring nesting beaches while working and living in stifiling heat among mosquitoes and sand fleas. Before this project there was no intensive monitoring of sea turtles on the main island of Cuba. Ibarra has built strong ties with local schools and residents, involving them in the project. With their help, she has drastically reduced poaching of turtles and their eggs. Her vision is truly farsighted. "Environmental education is about challenging minds, something that is very difficult if you don’t plant a seed early in peoples’ lives. That’s why we started the Guanahacabibes project. We are there now, but what will happen there is ultimately their responsibility."

Post Script: Within the next few weeks, both of the students I quoted in the article will make Dr. Ibarra very proud. Julia Azanza Ricardo will receive her Doctorate from the University of Havana and she now oversees the Guanahacabibes Sea Turtle project. Daylin Muñoz Nuñez will receive her Master's degree from Duke University’s Nicholas School of the Environment and soon begins work with Environmental Defense Fund.

At her request, Dr. Ibarra's ashes will be spread among the sands of the beaches of Cuba’s Guanahacabibes peninsula. Per her wishes, there will be no formal ceremony or funeral. If you would like to pay tribute to Dr. Ibarra's memory, a contribution to The Ocean Foundation's "Cuba Marine Research & Conservation Fund" will go directly to the Guanahacabibes Sea Turtle project and research expeditions to Cuba's Gulf of Mexico Coast, both collaborative programs with CIM that are supporting the research of nearly 20 students.
Posted by Mercury at 6:02 AM