Not Chicago, not New York but ancient "sin cities": Sodom and Gomorrah 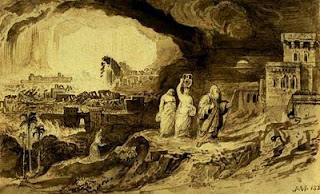 "Then the Lord rained on Sodom and Gomorrah brimstone and fire from the Lord out of heaven; and he overthrew those cities, and all of the valley, and all the inhabitants of the cities, and what grew on the ground."
Okay, that's the mythical Biblical version and carries some weight for the fundamentally religious but from a scientific perspective it isn't that simple and over the years conjectures have been varied: Massive flooding, volcanic, an asteroid, and earthquake [Great Rift Valley].

"Searching for Sodom and Gomorrah"

Biblical Archaeology Review
Sodom and Gomorrah. They are perhaps the most infamous cities of the Bible, inhabited by men and women so vile and wicked that only their utter annihilation could appease God’s wrath (Genesis 19).

But where does the Bible locate these legendary dens of iniquity, and does any trace of them still exist?

It is clear from various Biblical passages that Sodom and Gomorrah should be located in the Dead Sea region. When Abraham and his nephew Lot part ways (Genesis 13:8-13), Lot chooses to settle in the Jordan valley "in the direction of Zoar" and moves his tents to "the cities of the plain" as far as Sodom. According to Genesis 14, the "cities of the plain," which include Sodom, Gomorrah, Zoar, Zeboiim and Admah, join forces to battle a coalition of Mesopotamian kings in the "Valley of Siddim (that is, the Salt Sea)," a clear reference to the Dead Sea region. Another clue is found in Genesis 10:19, which describes the southern border of Canaan as extending east from Gaza "in the direction of Sodom, Gomorrah, Admah, and Zeboiim," again placing the cities in the vicinity of the Dead Sea.

But Biblical scholars have long been divided about where exactly around the Dead Sea the cities were located. Most traditional theories place the cities at the southern end of the Dead Sea, in and around the well-watered and fertile plains and valleys south of the Lisan peninsula. At the southern end of this region, the Bible and other sources, including the first-century A.D. historian Josephus and the sixth-century A.D. Madaba Map, locate Zoar, one of the cities of the plain and the place to which Lot and his daughters fled following the destruction of Sodom (Genesis 19:22-23).*

Finding no clear archaeological evidence for Sodom and Gomorrah in the vicinity of Zoar, however, W.F. Albright and others conjectured that the remaining cities of the plain lay submerged beneath the shallow waters of the Dead Sea's southern basin. They argued that during the time of Abraham, when the level of the Dead Sea was possibly much lower, the entire southern basin would have been a lush valley watered by rivers flowing down from the highlands of Moab.

By the late 1970s, when the level of the Dead Sea had begun to drop considerably due to industrial exploitation and damming projects, archaeologists had an unprecedented opportunity to search the now mostly dry southern basin for remains of the lost cities. But alas, not a sherd was found; there was no evidence that the cities had been submerged beneath the salt sea.

While exploring the high fertile banks along the southeastern shore of the Dead Sea, however, the same archaeological expedition discovered the ruins of four towns that had been inhabited during the Early Bronze Age (3300-2000 B.C.).** Some scholars, though certainly not all,*** date the origins of the stories of Abraham and Lot to the end of this period. The expedition, headed by archaeologists Thomas Schaub of Indiana University of Pennsylvania and Walter Rast of Valparaiso University, excavated two of the largest sites in the plain—Bab edh-Dhra and Numeira—and discovered that both had been thriving Bronze Age cities that were destroyed at almost exactly the same time, about 2350 B.C. Rast proposed that the Biblical story of the destruction of Sodom and Gomorrah originated from ancient traditions surrounding the near-simultaneous demise of these once-prosperous twin cities.1

Although many have adopted Rast's view of the southern provenance of the Sodom and Gomorrah tradition, others have proposed that the Bible actually locates the fabled cities at the northern end of the Dead Sea. The most vocal proponent of the northern theory is Dr. Steven Collins of Trinity Southwest University, who argues that Lot’s apportioned territory and all the "cities of the plain" (Genesis 13:8-13) should be located in the broad circular plain where the Jordan River meets the Dead Sea. First, according to Collins, Genesis 13 places the separation scene between Abraham and Lot somewhere around Ai and Bethel, an area that has commanding views over the northern Dead Sea and southern Jordan valley, not the southern Dead Sea region. Second, the passage describes Lot’s territory as the "circular" or "disc-shaped" plain (Heb. kikkar) of the Jordan, a term which Collins argues refers specifically to the broad alluvial plain of the southern Jordan valley just north of the Dead Sea.

What is more, Collins believes he has located the actual site of Biblical Sodom on a high bank overlooking the valley. The site, Tell el-Hammam, is one of the largest mounds in the plain and supported almost continuous occupation from the Chalcolithic to the Byzantine period. Although the site has substantial Early Bronze Age remains (as at Bab edh-Dhra and Numeira), Collins believes that the extensive and well-fortified Middle Bronze Age city (c. 2000-1550 B.C.) represents the Sodom known to Lot and Abraham, Biblical figures that he and many others believe should be dated to the first half of the second millennium B.C. In one area of the Middle Bronze Age city, Collins located a massive destruction layer over 3 feet thick. Could this layer be the archaeological residue of God’s infamous judgment on Sodom? Whatever the case, Collins hopes to uncover even more evidence of the Biblical story in future seasons of excavations at the site.

But whether one locates Sodom and Gomorrah south or north of the Dead Sea, there is plenty of reason to suspect that the Biblical tradition surrounding the doomed cities of the plain was more than just fanciful legend. As suggested by Amos Frumkin in his May/June 2009 BAR article on the salt pillar known as Lot's Wife, the Sodom story told in the Bible likely represents an ancient memory of a single catastrophic event that affected the cities and peoples of the Dead Sea region nearly 4,000 years ago.

Sodom and Gomorrah
Posted by Mercury at 6:03 AM