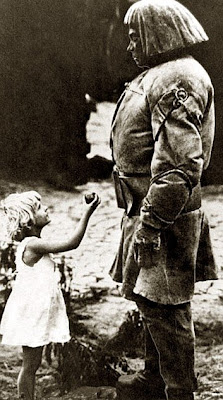 [Co-director and The Golem]
Take an old Jewish myth and make a few bucks--why not. 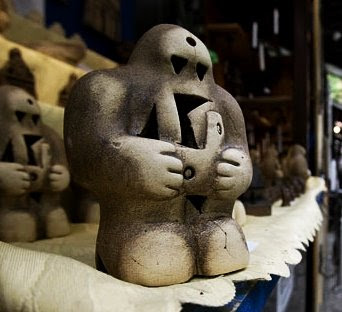 Prague Journal
PRAGUE — They say the Golem, a Jewish giant with glowing eyes and supernatural powers, is lurking once again in the attic of the Old-New Synagogue here.

The Golem, according to Czech legend, was fashioned from clay and brought to life by a rabbi to protect Prague's 16th-century ghetto from persecution, and is said to be called forth in times of crisis. True to form, he is once again experiencing a revival and, in this commercial age, has spawned a one-monster industry.

There are Golem hotels; Golem door-making companies; Golem clay figurines (made in China); a recent musical starring a dancing Golem; and a Czech strongman called the Golem who bends iron bars with his teeth. The Golem has also infiltrated Czech cuisine: the menu at the non-kosher restaurant called the Golem features a "rabbi's pocket of beef tenderloin" and a $7 "crisis special" of roast pork and potatoes that would surely have rattled the venerable Rabbi Judah Loew ben Bezalel, the Golem's supposed maker.

Even the first lady, Michelle Obama, paid her respects, when she visited Rabbi Loew's grave last month and, following Jewish tradition, placed a prayer on a piece of paper and put it near his tombstone.

Eva Bergerova, a theater director who is staging a play about the Golem, said it was no coincidence that this Central European story was ubiquitous at a time of swine flu and economic distress. "The Golem starts wandering the streets during times of crises, when people are worried," Ms. Bergerova said. "He is a projection of society's neuroses, a symbol of our fears and concerns. He is the ultimate crisis monster."

Rabbi Manis Barash, who oversees an institute here devoted to Rabbi Loew's work, said that "because of the financial crisis, people were increasingly turning to spirituality for meaning."

Others, like Jakub Roth, a derivatives trader and a leader of the Jewish community, noted that the Golem had contemporary relevance because he protected sacred values from imminent dangers. "In the past this was anti-Semitism," Mr. Roth said. "Today it is global recession, Islamic fundamentalism and Russian aggression."

The surge in popularity of the Golem also anticipates the 400th anniversary in September of Rabbi Loew's death in 1609, at nearly 100. A Jewish mystic and philosopher who a leading scholar of the Talmud and kabbalah and wrote at least 22 books, he was known widely as the Maharal, a great sage.

Few here dispute that the Golem, who is often depicted as either a menacing brown blob or an artificial humanoid, has become a lucrative global brand. But it is also a profound irritation to Prague's Jewish leaders that Rabbi Loew's legacy has been hijacked by a powerful dunce whom the Talmud characterizes as a "fool."

"I am frustrated by the legend of the Golem in the same way I am frustrated that people buy Kafka souvenirs on every street in Prague but don’t bother to read his books," Rabbi Karel Sidon, the chief rabbi of the Czech Republic, lamented. Alluding to the recent rise of neo-Nazis in the Czech Republic and elsewhere, however, he hastened to add, "We like the Golem because he protected the Jews."

Rabbi Barash emphasized that in the Talmud, the Golem was considered a dumb klutz because he was literal-minded, could not speak and had no "sechel," or intellect. "If in school," he said, "you didn't use your brains, the teacher would say, 'Stop behaving like a golem.'"

According to one version of Prague's Golem legend, the city's Jews, under the Holy Roman Emperor Rudolf II, were being attacked, falsely accused of using the blood of Christians to perform their rituals. To protect the community, Rabbi Loew built the Golem out of clay from the banks of the Vltava River.

He used his knowledge of kabbalah to make it come alive, inscribing the Hebrew word emet, or truth, on the creature's forehead. The Golem, whom he called Josef and who was known as Yossele, patrolled the ghetto; it is said he could make himself invisible and summon spirits from the dead.

Eventually, the Golem is said to have gone on a murderous rampage — out of unrequited love, some explain. Fearing that he could fall into the wrong hands, Rabbi Loew smeared clay on the Golem's forehead, turning emet into met, the Hebrew word for death, and put him to rest in the attic of the Old-New Synagogue.

Though a quintessentially Jewish tale, the saga of the Golem, popularized here in a 1950s fairy tale film, has long been regarded as a Czech legend. Benjamin Kuras, a Czech playwright and the author of the book "As Golems Go," said the fighting figure of the Golem had appeal in a nation traumatized by centuries of occupation and invasion.

"After living through the Austro-Hungarian Empire, Nazism and decades of communism, the Czechs are drawn to a character with supernatural powers that will help liberate them from oppression," Mr. Kuras said. "Many here don't even realize he is a Jewish monster."

Such is the pull of the Golem that Rabbi Sidon said he received dozens of requests each year for visits to the Golem's attic lair — requests he politely declined. During World War II, it was rumored that Nazi soldiers broke into the synagogue, and Rabbi Loew's Golem ripped them apart, limb by limb.

"We say the Golem is in the attic, up there," Rabbi Sidon said. "But I have never gone there. I say that if the Golem was put there 400 years ago, then today he is dirt and dust and can't do anything to disturb anyone."

Asked if the Golem was fact or fiction, Rabbi Sidon shrugged and sighed. "It's possible he is real," the rabbi said. "I just don't know." But he noted that there had been several cases of sage rabbis who had supposedly created golems.

Rabbi Sidon recalled that in the late 1990s, an elderly Jewish woman asked him where the Golem was. "I told her he was in the attic," Rabbi Sidon said. "'Not that one, the real one,'" he said the woman replied, insisting that she had been at the synagogue a year earlier and had met Mr. Golem, a lanky figure with ruddy cheeks.

Recognizing the description, the rabbi said, he confronted the synagogue's shamash, or attendant, a man called Josef, who shares the Golem’s first name. Josef eventually confessed that he had been telling visitors he was the Golem’s great-grandson.

Watch or download complete film.
Posted by Mercury at 12:21 PM

Email ThisBlogThis!Share to TwitterShare to FacebookShare to Pinterest
Labels: "The Golem", mythology