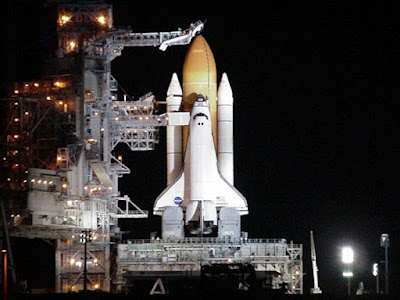 Time
Here are three things NASA can do to become a safer agency: stop flying Atlantis, stop flying Endeavour, stop flying Discovery. Those, of course, are NASA's three space shuttles, and once the last of the snakebit ships is finally mothballed, here's one more piece of advice: Don't ever build anything like them again.

The shuttle Atlantis is once again in orbit - this time for a final servicing visit to the venerable Hubble Space Telescope - and once again the world is sweating out reports of damage to the spacecraft's thermal tiles caused by debris shed from the external fuel tank during liftoff on Monday. It was just that kind of mishap that doomed the shuttle Columbia and its seven-member crew back in 2003, allowing superheated gases to penetrate the ship during re-entry and causing it to disintegrate. That was the second shuttle to be lost in flight, after the explosion of Challenger in 1986. The hope now is that the three surviving ships can limp along without any further accidents for nine more missions - through 2010 or 2011 - after which construction of the International Space Station (ISS) will be complete and the orbiters can be retired.

First, however, NASA has to get through the current flight, and that became a dicier matter when reports came down Tuesday afternoon that sensors under the shuttle's skin and a camera at the end of its robotic arm discovered a scattering of dings across a 21-in. stretch in the leading edge of the right wing, affecting four or five tiles. NASA was quick to call for calm. Indeed, Atlantis was scheduled to rendezvous with Hubble at 7:41 a.m. ET on Wednesday, but it will be more than five hours later before the shuttle's robot arm actually grabs hold of it.

"The preliminary analysis is that the damage is not very deep and this is not something we're very worried about," said mission manager LeRoy Cain at an afternoon press conference on Tuesday. "It looks like something just chattered away on the edge there."

If it does turn out that the damage is more serious than that, it will be occurring on a particularly bad mission. Most of the shuttles' trips to orbit these days are for visits with the ISS. The station is a roomy place - by spacecraft standards at least - and if a shuttle's underside is found to be too badly damaged to allow a safe re-entry, the astronauts could simply bunk down in the ISS until another shuttle or Russian Soyuz ships could bring them home.

But that's not an option on this mission. The Hubble orbits at an altitude of about 350 miles and an inclination of 28.5 degrees. The ISS orbits lower - roughly 220 miles above the earth - and at a much sharper 51.6-degree angle. It's not hard for a spacecraft to change its altitude, but shifting its orbital plane is monstrously hard and energy-consuming, and the shuttle would never be able to pull off such a maneuver. So, the fallback for this crew is another whole orbiter, the shuttle Endeavour, which has been poised on Pad B at Cape Canaveral since before Atlantis launched, just in case a rescue is needed.

As dangerous as it can be to fly the shuttles, the agency has done a commendable job of getting the debris problem under control since the loss of Columbia. Cameras on the underside of the ship send back live streaming videos throughout the launch phase, allowing controllers to monitor any foam or other material that is shed en route. Analysis of Atlantis' tapes show a relatively small debris hit at the 106-sec. mark in the ascent - at precisely the moment skin sensors also detected a strike in the area in which the dings have been spotted. That area, at about the spot where the wing meets the ship, isn't the best possible place to suffer damage, since the heat buildup there can be considerable during re-entry, but it's not the worst either, since other areas get a whole lot hotter. (See pictures of animals in space.)

"It's not as dangerous as if it had occurred farther back," says Cain. "The same amount of damage in another area would have been more problematic."

So sanguine is NASA about this problem - or, at least, so sanguine is it trying to appear - that while Cain says engineers will spend the night analyzing the images and data from Atlantis, he does not think the inspection will yield anything to cause further worry. "We probably won't even need a focused inspection in this area," says Cain. "Still, we want them to take the time and review the data."

Meantime, back in Florida, Endeavour waits in case it's needed. There too, people are feeling a little jumpy. Earlier Tuesday, Pad B was struck by lightning - though Endeavour shook it off without any damage.


"Retire shuttles" poll
Posted by Mercury at 6:04 AM