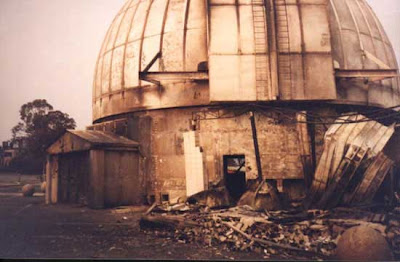 Perhaps you remember the terrible Australian fires of 2003 that demolished most of the Mount Stromlo Observatory complex.

On July 13th, 2003 Penny Sackett, Director of the Research School of Astronomy and Astrophysics, wrote:

The fires destroyed much of our infrastructure, but left our most important asset intact - our people,....

The day after fires, we committed to restoring Stromlo and its network of facilities as a pillar of Australian science.

Three weeks after the fires, our staff were back at work on the mountain, working in two office buildings which were largely undamaged.

We can not and we should not reconstruct a carbon copy of the old Stromlo. This new design is overwhelmingly oriented around meeting the needs of staff, students and visitors - while also ensuring Stromlo retains its status as an internationally important observatory.

For decades, Stromlo and Siding Spring have been operated as integrated observatories, combining the virtues of a control base close to ANU, close to the nation's capital and accessible to the community with a primary observation base offering optimal astronomical and climatic conditions.

The new design retains telescopes and the research hub at Stromlo, but provides even stronger integration with the University’s Siding Spring resources, ultimately providing a more powerful research facility for Australia.
PLANS UNVEILED FOR THE NEW STROMLO 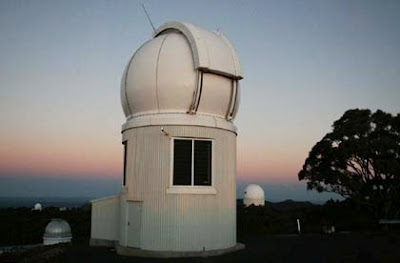 Part of Mount Stromlo Observatory has been rebuilt.

"Eye of Mount Stromlo rises from the ashes"

The Sydney Morning Herald
UNRAVELLING the mysteries of the skies will be made easier for scientists worldwide by something of a $13 million phoenix.

A giant telescope was unveiled yesterday, an improvement on equipment lost to Canberra's bushfires six years ago.

The Skymapper is the country's first new optical research telescope in 25 years. It will be used to create a digital map of the southern skies, using detailed pictures taken over the next five years.

The telescope will be based at Siding Spring Observatory near Coonabarabran in NSW and research will be shared freely with scientists overseas via the internet.

The Minister for Science and Research, Kim Carr, said the Skymapper added to Australia's impressive capabilities in astronomy. "It is fantastic to see Mount Stromlo reborn as a centre for internationally significant astronomy after the horror of the 2003 bushfires," he said.

Supporting space science helped people to understand their place in the universe and inspired technology that improved lives, he said.

The lead scientist on the project, Professor Brian Schmidt, said astronomers would use data retrieved by the telescope to make new discoveries. "Everything from dwarf planets like Pluto in our solar system to the first black holes in the universe," he said.

The project began in 2002 when the Australian National University applied for a grant to survey the southern skies using a telescope at Mount Stromlo. Only 18 days after it won the grant, a bushfire ripped through the observatory in a blaze that claimed four lives and destroyed hundreds of homes.

The telescope is also Australia's most sensitive digital camera and can take snaps of a patch of sky 25 times larger than the full moon.

Professor Schmidt called it a "268 megapixel behemoth" with sensitivity 5 million times greater than the human eye.

Space sciences and astronomy projects received $160.5 million in the last Federal Budget, including an $8.6 million pledge to create a Space Policy Unit.

The observatory was established in 1924 as The Commonwealth Solar Observatory. The Mount Stromlo site had already been used for observations in the previous decade, a small observatory being established there by Pietro Baracchi using the Oddie telescope being located there in 1911. The dome built to house the Oddie telescope was the first Commonwealth building constructed in the newly established Australian Capital Territory. Until World War II, the observatory specialised in solar and atmospheric observations. During the war the workshops contributed to the war effort by producing gun sights, and other optical equipment. After the war, the observatory shifted direction to stellar and galactic astronomy and was renamed The Commonwealth Observatory.

The ANU was established in 1946 in nearby Canberra and joint staff appointments and graduate studies were almost immediately undertaken. A formal amalgamation took place in 1957 with Mount Stromlo Observatory becoming part of the ANU.

On January 18, 2003 the devastating Canberra firestorm hit Mount Stromlo (which is surrounded by a plantation pine forest) destroying five telescopes, workshops, seven homes and the heritage listed administration building. The only telescope to escape the fires was the 1868 15-centimetre Farnham telescope.
Posted by Mercury at 5:01 AM