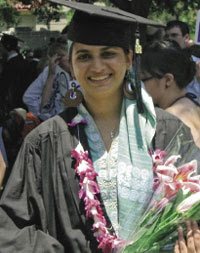 Chemical & Engineering News
A stiff fine has been meted out to University of California, Los Angeles over the death of a 23-year-old researcher, Sheharbano (Sheri) Sangji, after a Dec. 29, 2008 accident in a chemistry lab there.

The California Division of Occupational Safety and Health (Cal/OSHA) says the $31, 875 fine—the largest it has assessed in recent investigations--is for safety violations directly relating to the incident. UCLA must also fix all deficiencies outlined by the agency.

"I think Cal/OSHA did everything they could" within their regulatory structure to penalize UCLA, says Neal Langerman, the founder of the company Advanced Chemical Safety and a consultant to the American Chemical Society Committee on Chemical Safety.

The Cal/OSHA report says that Sangji was drawing approximately 20 mL of 1.7 mol/L tert-butyl lithium in pentane into a 60 mL syringe, when the syringe plunger was either ejected or pulled out of the syringe. An undetermined amount of the liquid splashed onto Sangji's hands, arms, and torso, and immediately ignited her clothing. Sangji, who was not wearing a lab coat, was burned over 43% of her body. A labmate used his lab coat to extinguish the flames and called for help.

The fine against UCLA is the largest levied by Cal/OSHA in seven recent investigations involving academic research labs or the chemical or biotechnology industry. Fines in the six prior cases ranged from $1,200 to $19,135, and involved serious injuries but not fatalities.

UCLA will not contest the findings or appeal the fine, says spokesman Phil Hampton. In a prepared statement, UCLA outlined the steps it is taking to address the deficiencies, including distributing flame-resistant lab coats to laboratory personnel who work with flammable materials and requiring labs to assess and document laboratory risks, including specifying appropriate personal protective equipment for experiments.

Sangji worked at UCLA in the laboratory of chemistry professor Patrick Harran. In a separate statement, Harran says that Sangji "was an experienced chemist and published researcher who exuded confidence and had performed this experiment before in my lab.... However, it seems evident, based on mistakes investigators tell us were made that day, I underestimated her understanding of the care necessary when working with such materials."

Sangji graduated in May 2008 with a bachelor's degree in chemistry from Pomona College and worked at Norac Pharma in Azusa, Calif., for four months before starting work in Harran's lab.

Safety consultant Langerman notes that when Cal/OSHA investigates an incident, it can only focus on that particular event and not evaluate the rest of the department or institution. He adds that the incident that led to Sangji's death could happen at any university and should serve as a wake-up call for faculty, university officials, funding agencies, and professional societies to put new emphasis on lab safety.

you can give employees all the safety training you want....it does not mean they will always make judicious choices. personal responsibility is a fast fading concept....look at some of the ridiculous outcomes of jury trials where a woman spills coffee on herself and is given millions....if the young lady was such an experienced researcher what was her role in all of this?? this fine will be a drop in the bucket considering the Los Angeles mentality of its juries

The fine will be paid by an insurance company and as you wrote the university will feel nothing. The next item will be a wrongful death law suit by her family...years of litigation. If I recall correctly, the Bush administration established "caps" on personal injury lawsuits and dismissal of frivolous personal injury lawsuits. [Also, you mentioned the "coffee" incident. That involved McDonalds and a woman drinking coffee while driving. She did win the lawsuit but I don't think she received a dime in settlement.] Many times common sense rules and individuals must assume a certain amount of personal responsibility--it is just dumb to drive drinking hot coffee. But this sad case with the research student is somewhat different. Accidents do happens. Sure, she must assume some responsibility and so should the coworkers and the university. Maybe some of the glassware was defective. We just don't know. It is always a shame to be vigilant and admonishing after a tragedy. I well remember in a community that I lived in several years ago regarding a residential intersection where no stop signs were installed and many minor accidents occurred. The city council indicated that nothing would be done until there was a fatality or two. That is not sound or responsible judgement.