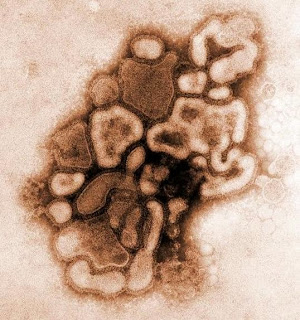 Has the media over emphasized the threat of the H1N1 virus?

"Dead pigs in China, evil factory farms in Mexico and an Al Qaeda plot involving Mexican drug cartels are a few wild theories seeking to explain a deadly swine flu outbreak that has killed up to 176 people."...so wrote Michael Kahn of Reuters. What are your thoughts on this Art Bell...do aliens fit into this? The media has done its best to hype the "terrors" of the H1N1 virus and scare the bejeebers out of many people, And cease calling it "swine flu"...it is a "human contact" virus...a combination of swine, avian, and human construction. The chances of acquiring the virus are greater from a door knob than a pork tenderloin sandwich. The media makes big bucks hyping H1N1 and we all love a good global disaster. We might be better concerned with what Ned "Scotty" Scott: from The Thing said..."Watch the skies, everywhere! Keep looking. Keep watching the skies!" Mankind has better odds of suffering extinction from an errant asteroid.

"Was the Alarm over Swine Flu Justified?"

Time
Like a patient suffering from a particularly tenacious case of, well, the flu, the H1N1 virus seemed to gain ground and then lose it over the weekend, leaving health officials cautious but hopeful that the disease might be on the wane. The number of confirmed infections continues to rise, with the World Health Organization (WHO) reporting 898 infections in 18 countries as of May 3, and the Centers for Disease Control and Prevention (CDC) tallying 226 confirmed cases in 30 U.S. states. The continuing spread led Homeland Security Secretary Janet Napolitano to predict on Sunday that the WHO might soon raise its pandemic alert level from phase 5 to the highest stage, phase 6, which would indicate that a full flu pandemic was underway. "The virus has arrived, I would say, in most of the country now," said Anne Schuchat, interim deputy director for science and public health at the CDC.

But there have been no deaths and few serious cases reported outside Mexico — and even there, the epicenter of the H1N1 outbreak, officials reported that the spread has slowed. As labs slogged through the backlog of suspected H1N1 flu cases, the number of confirmed cases and deaths dropped precipitously, indicating that the initial outbreak that so alarmed world health officials might not have been as serious as first feared. (See the top five swine flu don'ts.)

As a global network of flu experts began to take a good look at the genetic structure of the H1N1 virus, there were indications that the bug might turn out to be little more dangerous than an average flu. Though scientists can't say exactly what genes make a particular strain of flu unusually deadly, all of the viruses that triggered pandemics over the past century — the catastrophic 1918 flu, but also the 1957 and 1968 pandemics — had a particular mutation in the gene that makes a protein called PB1-F2. The H1N1 virus also seems to lack mutations that make the especially virulent H5N1 avian flu, which has killed more than half the people with confirmed infections. (See pictures of the effects of swine flu in Mexico.)

Even if H1N1 seems to lack the killer instinct at the moment, flu viruses are unpredictable, and there's no guarantee that it couldn't change form. Flu season in the southern hemisphere is just beginning, and if the virus establishes itself in countries like Argentina or Australia, it could cause real damage. And there are still open mysteries, like why the bulk of the infections in the U.S. — and the confirmed deaths thus far in Mexico — have been found in people who are relatively young, which is unusual for the flu, or why this strain seems to be spreading at a time of year when the flu usually levels off. "These viruses mutate, these viruses change, these viruses can further reassort with other genetic material," said Michael Ryan, the WHO's global alert and response director. "So it would be imprudent at this point to take too much reassurance."

Still, a little more than a week after the WHO first swung into high alert, it's easy to wonder whether H1N1 might turn out to be much ado about not that much. Certainly the actions of some countries — like Egypt's impulsive move to cull some 300,000 pigs and China's apparent decision to preemptively quarantine hundreds of Mexican nationals — smack of panic. In the U.S., too, hundreds of schools have temporarily closed down because of suspected or confirmed swine flu cases, with Fort Worth, Texas, making the decision to shut down all city schools until May 11 at the earliest. Several countries have canceled all flights to and from Mexico, and some airlines are cutting way back on flights to the country. If it does indeed turn out that H1N1 is just the normal flu by another name, we may look back on last week's rapid response with chagrin — and be that much less responsive the next time a pandemic knocks on the world's door.

But that would be a mistake. First of all, it's important to understand that pandemic does not necessarily equal apocalypse. A pandemic occurs when a new flu virus emerges and starts spreading easily from person to person, and then from country to country. (To declare Stage 6 for H1N1, the WHO needs to see sustained spread of the virus in multiple regions of the world; so far, that has happened only in North America.) A pandemic doesn't mean that a new virus is unusually deadly, only that it spreads easily — as H1N1 seems to do. It wasn't possible to wait to find out how virulent H1N1 would be before initiating a global response; like a fire department receiving an emergency call, the responsible choice is to snap into action, even if it later turns out to be a contained blaze.

And we'll never fully know how much the past week's global response — the travel advisories, the school closings, Mexico's move to all but shut down its capital city — may have helped reduce the extent of the disease's spread. It's easy to become inured to the CDC's unrelenting stream of advice on hygiene — on April 30, we actually had the President of the United States use a news conference to tell Americans to wash their hands more — but there is evidence that such elementary actions can be remarkably effective in slowing the spread of infectious disease. (Studies have shown that towns that instituted similar measures during the 1918 flu had death rates that were considerably lower than the norm.) "I think [the government] has been getting an A-plus for how they've communicated the threat here," says Jeffrey Levi, executive director of the Trust for America's Health.

The reality is that we live on a planet where new, potentially dangerous diseases are constantly emerging. Over the past six years alone, we've seen SARS, a more virulent bird flu and now H1N1, not to mention countless other pathogens that have escaped public notice but still keep infectious-disease experts lying awake at night. Thanks to the efforts of the WHO, we've built a remarkable early-detection system for new diseases — one sensitive enough to catch major threats and minor ones — and we should be rational enough to heed its warnings without acting as if the sky were falling.

President Obama, in his weekly address on May 2, put it best: "Because we have it within our power to limit the potential damage of this virus, we have a solemn and urgent responsibility to take the necessary steps. I would sooner take action now than hesitate and face graver consequences later." Better safe than sorry — when it comes to diseases, it's as clichéd as washing your hands, and just as smart.
Posted by Mercury at 6:04 AM

perspective is the first causality from hysteria....but it sells papers...as we see in Global Warming, Al Gore would have disappeared into those vague shadows where vice presidents reside....

It is reported that this swine flu is less harmful and devastating than the previous flu season. It seems that people's fear got in the way of their knowledge of the virus. This nursing site offers many helpful tips on how to prevent the spread of the virus. It's not thanks to Obama, he's the one that set fear in us.

A school near me in the UK has closed down for a week.Not even a big city!its coming!!

ecrunner.....your post brought back memories of the Bush administration and my liberal friends saying that he was trying to make us afraid, very afraid and he should be strong for us like F.D. Roosevelt who said "fear nothing but fear itself" or something like that....now my conservative friends are saying the same about Obama....hmmmmm...maybe i need to fear politics period....on the whole they screw things up all together anyhow

The n1h1/swine flu is just as lame as the normal flu. I'm sure no more people (if not less) will die from the swine flu than the reg. flu.

If you're taking the appropriate measures to ensure you don't get sick, you may avoid getting the the H1N1 virus. Simple. This blog is so helpful. thank you for shearing your post.