"The Other Vitruvian Man"Was Leonardo da Vinci's famous anatomical chart actually a collaborative effort?by Toby LesterFebruary 2012Smithsonian
In 1986, during a visit to the Biblioteca Comunale Ariostea, in Ferrara, Italy, an architect named Claudio Sgarbi called up an anonymous copy of the Ten Books on Architecture, written by the Roman architect Vitruvius. The only such treatise to have survived from antiquity, the Ten Books is a classic, studied by historians of architecture and antiquity alike. Early copies are of great interest to scholars, but few had any idea this one existed. Academic inventories made no mention of it, and the Ariostea catalog described it unpromisingly as only a partial manuscript.When Sgarbi took a look at it, he discovered, to his amazement, that in fact it contained almost the full text of the Ten Books, along with 127 drawings. Moreover, it showed every sign of having been produced during the late 1400s, years before anyone was known to have systematically illustrated the work. “I was totally astonished,” Sgarbi told me. But then he made what he calls “a discovery within the discovery”: On the manuscript’s 78th folio, he found a drawing that gave him the chills. It depicted a nude figure inside a circle and a square—and it looked uncannily like Leonardo da Vinci’s Vitruvian Man.Everybody knows Leonardo’s drawing. It has become familiar to the point of banality. When Leonardo drew it, however, he was at work on something new: the attempt to illustrate the idea, set down by Vitruvius in the Ten Books, that the human body can be made to fit inside a circle and a square.This was more than a geometrical statement. Ancient thinkers had long invested the circle and the square with symbolic powers. The circle represented the cosmic and the divine; the square, the earthly and the secular. Anyone proposing that a man could be made to fit inside both shapes was making a metaphysical proposition: The human body wasn’t just designed according to the principles that governed the world; it was the world, in miniature. This was the theory of the microcosm, and Leonardo hitched himself to it early in his career. “By the ancients,” he wrote around 1492, “man was termed a lesser world, and certainly the use of this name is well bestowed, because ...his body is an analogue for the world.”But what should this microcosmic man look like? Vitruvius hadn’t provided illustrations. Artists in medieval Europe, loosely echoing Vitruvius, had come up with visions of their ideal man: Christ on the cross, representing both the human and the divine. But until the late 1400s, nobody had tried to work out exactly how a man with Vitruvian proportions might be inscribed inside a circle and a square. This was the challenge that prompted Leonardo to draw Vitruvian Man.He wasn’t the first to try. The earliest known effort, by the architect Francesco di Giorgio Martini, came in the 1480s, but it was more dreamy than precise, and in several respects failed to correspond to Vitruvius’ specifications: most notably, the one dictating that the navel should appear at the center of the circle.Leonardo’s solution was to de-center the circle and the square—or at least people thought this was his solution until Claudio Sgarbi came along. Sgarbi, a Modena-based architectural historian, initially assumed the drawing in the Ferrara library had to be a copy of Leonardo’s because the correspondences between the two were too close to be coincidental. But as he studied the drawing, Sgarbi discovered it to be full of false starts and corrections—none of which would have been necessary had its illustrator been copying Leonardo. This led him to a startling thought: Perhaps the Ferrara picture had come first.But who was this anonymous artist, and what was his relationship to Leonardo?After years of study, Sgarbi thinks he has the answer. In a volume of academic papers to be published this winter by the Italian publisher Marsilio, he proposes that the author was a young architect named Giacomo Andrea da Ferrara.What little is known about Giacomo Andrea derives primarily from a remark made in On Divine Proportion (1498), by Luca Pacioli, who described him as both a dear friend of Leonardo’s and an expert on Vitruvius. Leonardo himself records in his notes having had dinner with Giacomo Andrea in 1490, the year Leonardo is thought to have drawn Vitruvian Man. And elsewhere Leonardo mentions “Giacomo Andrea’s Vitruvius”—a direct reference, Sgarbi believes, to the Ferrara manuscript. “Everything started to fit perfectly, like in a puzzle,” he told me.Sgarbi’s hunch is that Leonardo and Giacomo Andrea collaborated on their drawings, but few traces of Giacomo Andrea survive, and unearthing more, enough to make Sgarbi’s case definitively, may take years. Still, scholars already find it intriguing. The French historian Pierre Gros, one of the world’s foremost authorities on Vitruvius, says he considers the idea “seductive and convincing.”One of the few other known references to Giacomo Andrea concerns his death. In 1499 the French occupied Milan, where he and Leonardo had lived since the 1480s. Already admired internationally, Leonardo established cordial relations with the French and safely fled the city. But Giacomo Andrea wasn’t so lucky. He apparently stayed on as a kind of resistance fighter, and the French captured, hanged and quartered him the following year. “Because of his loyalty to the Duke of Milan,” Sgarbi says, “Giacomo Andrea was erased from history”—as was his Vitruvian Man.[Toby Lester’s new book, Da Vinci’s Ghost, is about the history behind Leonardo’s Vitruvian Man.] 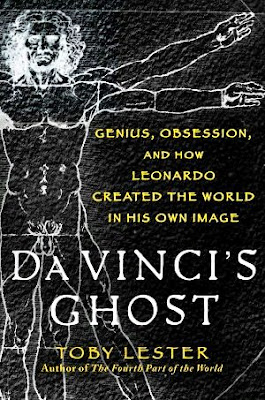 Thanks to POSP stringer Tim.