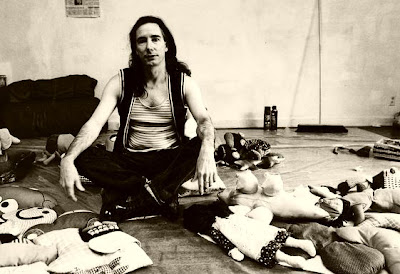 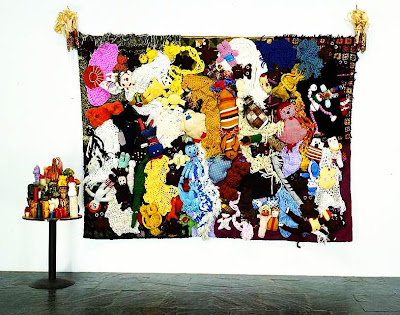 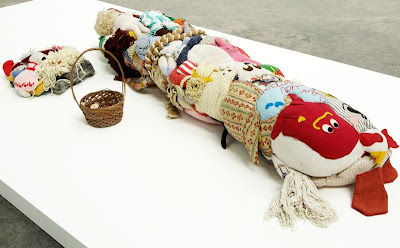 "Mike Kelley, an Artist With Attitude, Dies at 57"byHolland CotterFebruary 1st, 2012The New York Times
Mike Kelley, one of the most influential American artists of the past quarter century and a pungent commentator on American class, popular culture and youthful rebellion, was found dead on Wednesday at his home in South Pasadena, Calif. He was 57.Sgt. Robert Bartl of the South Pasadena police said it appeared that Mr. Kelley had committed suicide. Speaking to The Associated Press, he said a friend of Mr. Kelley’s had told investigators that Mr. Kelley had been depressed after breaking up with a girlfriend.An autopsy was to be performed, Sergeant Bartl said.Mr. Kelley was born in Wayne, Mich., a suburb of Detroit, to a working class Roman Catholic family in October 1954. His father was in charge of maintenance for a public school system; his mother was a cook in the executive dining room at Ford Motor Company. He had early aspirations to be a novelist, but doubted his talent and found writing was too difficult, so he turned his energies to art, through painting, object-making and through music.In high school he immersed himself in Detroit’s heavy metal music subculture, and that involvement continued through college at the University of Michigan in Ann Arbor. There he performed in a proto-punk noise band called Destroy All Monsters with three other artists, Jim Shaw, Niagara and Carey Loren, creating work that, with its combination of anti-establishment politics and Dada theatrics, had close connections to performance art.He brought this interest with him to graduate school in 1978 at the California Institute of the Arts in Valencia, Calif. There he formed a second art-band, “The Poetics,” with fellow students John Miller and Tony Oursler. He absorbed, with some resistance, the school’s overriding focus on Conceptual Art and theory, eased into by the embracing approach of teachers like John Baldessari, Laurie Anderson and Douglas Huebler.He began creating multimedia installations that synthesized large-scale drawings and paintings, often incorporating his own writing, along with sculptures, videos (one was based on the television show “Captain Kangaroo”), and performances, often scatological and sadomasochistic in nature. Although he stopped performing in 1986 — he later said that he always had to get drunk to do it — the other formal elements remained constants in his art.A certain tone or attitude remained constant, too. The shorthand term for it is abjection, a deliberate immersion in the gross-out anarchy associated with youth culture. But to see only that was to miss the deep and covered-up strain of poetry in his work, evident in a series of sculptural pieces using children’s stuffed animals sewn onto or covered over with hand-knitted afghans.On one level, the pieces were sardonic send-ups of aesthetic trends like Minimalism, which Mr. Kelley despised as elitist. On another, they took aim at the strain of too-easy sentimentality he found repellent in popular culture. At yet another level, these pieces, with their martyred dolls and ruined promise of warmth, were innocence-and-experience metaphors, suggesting the trauma of hurt and loss that underlay the juvenile delinquent antics that surrounded them.By the mid-1980s, he was already gaining attention nationally and internationally. His career took off earlier in Europe than it did in the United States; he found enthusiastic audiences in France and Germany, at a time when Americans still didn’t know quite what to do with him, this artist who made drawings of garbage, parodied both religious art and underground politics, and made pieces with titles like “Plato’s Cave, Rothko’s Chapel, Lincoln’s Profile.” Mystifying as they were at the time, they have given inspiration to countless young artists since.The band Sonic Youth used Mr. Kelley’s work on the album cover for “Dirty,” released in 1992.Mr. Kelley began having regular one-man exhibitions at Metro Pictures in Manhattan in 1982, and at Rosamund Felsen Gallery in Los Angeles the following year. In 2005, he had his first solo show at Gagosian gallery in New York City, which was representing him at his death. A retrospective, “Mike Kelley: Catholic Tastes,” appeared at the Whitney Museum of American Art in 1993 and traveled to Los Angeles and Munich; a second retrospective appeared at the Museum of Contemporary Art in Barcelona in 1997; and a third was at the Tate Liverpool in 2004.Work by Mr. Kelley will be in the upcoming Whitney Biennial; it will be his eighth appearance in that show.Mr. Kelley is survived by a brother, George.Mike Kelley [Wikipedia]
Posted by Mercury at 1:41 PM