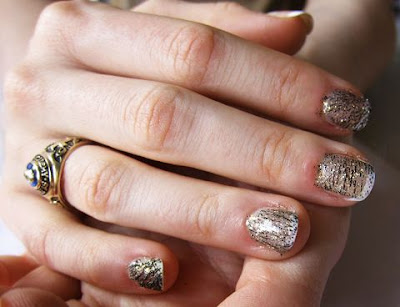 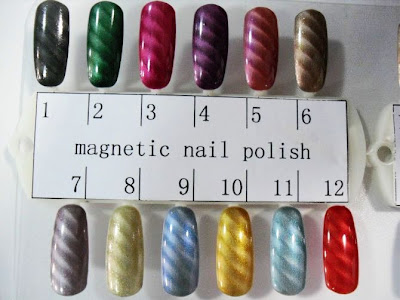 "The Physics of Magnetic Nail Polish"byEsther Inglis-ArkellFebruary 17th, 2012io9
Being of the Hack 'em Off or Chew 'em Up school of nail design, I was unaware that there was such a thing as magnetic nail polish. Now that I've learned about it, let's take a look at the physics of a nail polish that forms fascinating patterns when exposed to a magnet!We all have fingernails. Some people pay more attention to them than others. I keep mine free of potato chip crumbs, because the salt stings — but I don't do much more than that. However, it appears that some like to care for their nails . . . with science! There's a brand of nail polish which makes three-dimensional patterns when exposed to a magnet. Put down a base coat, put down on normal coat of the nail polish, and then glob on the next coat of polish. While the polish is still wet, swoop in and hold a magnet (and they supply one on the lid of the jar of polish) over the coat for ten seconds, and a cool light-and-dark striped pattern appears.It's no secret that there are iron shavings in the polish. That's why it responds to the magnet at all. What's less clear is why the nail polish forms a striped pattern, in particular. We've seen metal shavings hang from the ends of magnets in long 'beards,' so it seems like the whole coat of polish would just pull to a peak right under the magnet.It doesn't, because the magnet in the jar isn't just an 'end.' Both poles go to work on the shavings. We've seen how metal shavings placed on a piece of paper just over a bar magnet arrange themselves into long curving lines between the two poles. When under the influence of a magnetic field, bits of metal, with their highly mobile electrons, turn themselves into little magnets as well. Each little piece of the metal turns into a magnet, with a south pole and a north pole. The north pole heads toward the south pole of the original magnet. The south pole heads north. Under the force of the magnet, and the many little magnets under the shavings, the entire network of magnetized bits of metal arrange themselves until the push of one pole equals the pull of another, forming clear lines.Different shapes and forces of magnets make for different patterns in the nail polish. It would be interesting to see what would happen if someone tried this with something other than the magnet on the lid.
Posted by Mercury at 12:19 PM