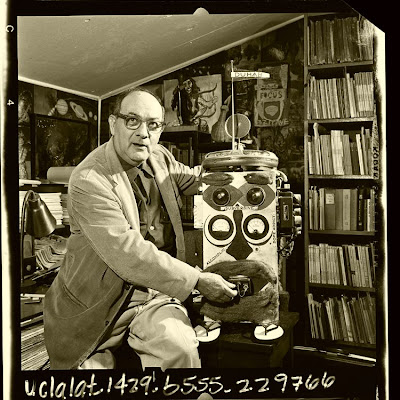 An archive snap of Lawrence Lipman and DUHAB from the Los Angeles Times [1965].
"The beatnik DUHAB robot"byScott HarrisonFebruary 7th, 2012
July 19, 1965: The original published caption reported:Author Lawrence Lipton, chronicler of the beatnik scene, demonstrates his “robot,” Duhab (detector of undesirable hibitues). Lipton says robot ferrets out the undesirables – including censors, book-burners.By 1965, media outlets were reporting the beatnik era over. Not so, claimed Lipton, whose 1959 best seller, “The Holy Barbarians,” chronicled the Venice scene. As quoted in a Times article by staff writer Doug Mauldin, Lipton explained, “What happened is that the artistic element has gone underground. Artists, writers, painters and avant-garde filmmakers live and work in their own pads.”“And there are two or three times as many true beats here as there were in the 1950s when they were getting all the publicity.”But, as pointed out in Mauldin’s story:He (Lipton) is particularly bitter about past campaigns to rid Venice of the Beatniks.“The Venice West beat scene was the most promising attempt ever made to bring avant-garde culture to Southern California, and it was murdered by self-righteous, puritanical busy-bodies and hostile police,” he said.The above portrait of Lipton accompanied Mauldin’s story in the July 29, 1965, Westside Edition of the Los Angeles Times.Lawrence Lipton [Wikipedia]Beatnik [Wikipedia]
Posted by Mercury at 12:46 PM