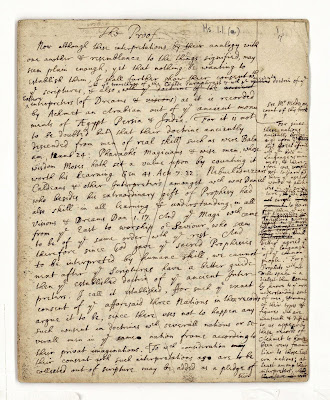 "Israeli library uploads Newton's theological texts"byAron HellerFebruary 15th, 2012The Associated Press
He's considered to be one of the greatest scientists of all time. But Sir Isaac Newton was also an influential theologian who applied a scientific approach to the study of scripture, Hebrew and Jewish mysticism.Now Israel's national library, an unlikely owner of a vast trove of Newton's writings, has digitized his theological collection -- some 7,500 pages in Newton's own handwriting -- and put it online. Among the yellowed texts are Newton's famous prediction of the apocalypse in 2060.Newton revolutionized physics, mathematics and astronomy in the 17th and 18th century, laying the foundations for most of classical mechanics -- with the principal of universal gravitation and the three laws of motion bearing his name.However, the curator of Israel's national library's humanities collection said Newton was also a devout Christian who dealt far more in theology than he did in physics and believed that scripture provided a "code" to the natural world."Today, we tend to make a distinction between science and faith, but to Newton it was all part of the same world," said Milka Levy-Rubin. "He believed that careful study of holy texts was a type of science, that if analyzed correctly could predict what was to come."So he learned how to read Hebrew, scrolled through the Bible and delved into the study of Jewish philosophy, the mysticism of Kabbalah and the Talmud -- a compendium of Jewish oral law and stories about 1,500 years old.For instance, Newton based his calculation on the end of days on information gleaned from the Book of Daniel, which projected the apocalypse 1,260 years later. Newton figured that this count began from the crowning of Charlemagne as Roman emperor in the year 800.The papers cover topics such as interpretations of the Bible, theology, the history of ancient cultures, the Tabernacle and the Jewish Temple.The collection also contains maps that Newton sketched to assist him in his calculations and his attempts to reveal the secret knowledge he believed was encrypted within.He attempted to project what the end of days would look like, and the role Jews would play when it happened. Newton's objective curiosity in Judaism and the Holy Land contrasted with the anti-Jewish sentiment expressed by many leading Christian scholars of the era, Levy-Rubin said."He took a great interest in the Jews, and we found no negative expressions toward Jews in his writing," said Levy-Rubin. "He said the Jews would ultimately return to their land."How his massive collection of work ended up in the Jewish state seems mystical in its own right.Years after Newton's death in 1727, his descendants gave his scientific manuscripts to his alma mater, the University of Cambridge.But the university rejected his nonscientific papers, so the family auctioned them off at Sotheby's in London in 1936. As chance would have it, London's other main auction house -- Christie's -- was selling a collection of Impressionist art the same day that attracted far more attention.Only two serious bidders arrived for the Newton collection that day. The first was renowned British economist John Maynard Keynes, who bought Newton's alchemy manuscripts. The second was Abraham Shalom Yahuda -- a Jewish Oriental Studies scholar -- who got Newton's theological writings.Yahuda's collection was bequeathed to the National Library of Israel in 1969, years after his death. In 2007, the library exhibited the papers for the first time and now they are available for all to see online.The collection contains pages after pages of Newton's flowing cursive handwriting on fraying parchment in 18th-century English, with words like "similitudes," "prophetique" and "Whence."Two print versions in modern typeface are also available for easier reading: A "diplomatic" one that includes changes and corrections Newton made in the original manuscript, and a "clean" version that incorporates the corrections.All of the papers are linked to the Newton Project, which is hosted by the University of Sussex and includes other collections of Newton's writings.The Israeli library says the manuscripts help illuminate Newton's science and well as his persona."As far as Newton was concerned, his approach was that history was as much a science as physics. His world view was that his 'lab' for understanding history was the holy books," said Levy-Rubin. "His faith was no less important to him than his science."The National Library of IsraelNewton ManuscriptsThese papers introduce facets of Newton’s personality and work that the public has never before encountered. They are evidence of the great lengths that Newton went to in trying to decipher writings that, in his opinion, contained secret knowledge encrypted in the Holy Scriptures of ancient cultures and in historical documents. Exemplifying perfectly this type of research are Newton’s efforts to produce knowledge of scientific significance from the Biblical and Talmudic descriptions of the Tabernacle and Temple. Newton’s diligence and precision is reflected in this research in the same manner it is reflected in his scientific work, and he regarded this science with the same religious fervor that made him see himself as a kind of prophet. The manuscripts found at the National Library are from the collection of Abraham Shalom Yehuda (1877-1951), an expert in Middle Eastern affairs. Professor Shalom Yehuda purchased the manuscripts at a public auction at London’s Sotheby’s in 1936. Other manuscripts in the collection, dealing mostly with the topic of alchemy, were purchased by the well-known economist, John Maynard Keynes, and are located at King’s College in Cambridge University. The National Library’s collection of the Newton Papers is now available to the general public in digital format. All of the papers are also linked to the Newton Project, where they are presented in two versions: a ‘diplomatic’ version that includes all the changes and corrections as they appear in the original manuscript, and a ‘clean’ version that enables a continuous reading of the text. For the digital collection, click here .
Posted by Mercury at 6:46 AM