Kudos to Ma'Kese and Isis 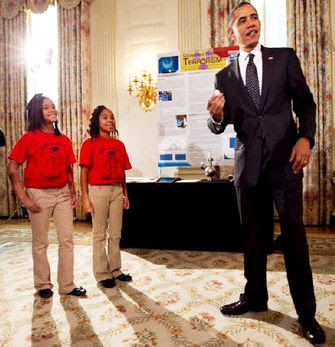 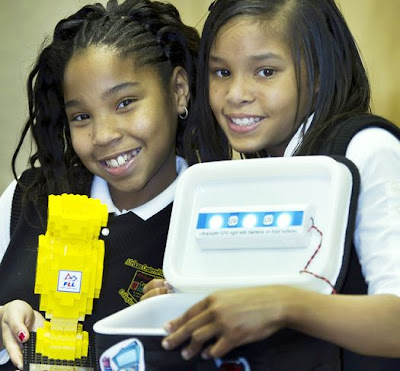 These young scientists — 11-year-old Ma’Kese Wesley (left) and 12-year-old Isis Thompson — show off their classmates’ “UVC Light Sanitizing Lunchbox” invention.
When I first read this, I thought, "Oh crap, another robotics project". Well, it wasn't entirely. It just seams that all these kids do is build and run a robot. It's not the physics of robots but a votech approach. But this offered something different and beyond the construction of robots.
"Science project carries KC kids to Hollywood, the White House"byJoe RobertsonFebruary 15th, 2012The Kansas City Star
The Kansas City sixth-graders had already enjoyed a rich wave of scientific discovery — “magical,” their teacher said.And that was before Hollywood called.That was before shooting commercial spots in L.A. Before hanging out and rapping with pop music star will.i.am.Before the trip to the White House to meet President Barack Obama.Before anyone imagined that any of this was possible.The students on the robotics team at the Afrikan Centered Education Collegium Campus, with no expectations of immediate fame, had caught a zeal for science that industries desperate for the next generation of innovators want to spread among children across the country.“We’re the examples,” 12-year-old Isis Thompson said. “You can do this stuff and still be cool.”The journey started when their school created a team last fall to compete in FIRST Lego League robotics. The contest required them to build a robot that would navigate a prescribed course while tackling tasks representing challenges in producing and delivering clean, healthy food to the nation’s dinner tables. Along with the robotic contest, teams also conducted research and developed project ideas.Teacher and robotics coach Debbie Cox had so many children participating she divided them into groups, with the boys meeting after school on Tuesdays and the girls on Thursdays.With the real-world news of contaminated cantaloupe as a backdrop, they brainstormed on ways to protect grocery produce. The boys were all about sanitizing student lunchboxes. The girls were looking for ways to apply bacteria-killing ultraviolet-C shortwave light. They created a rap song to give their work added flair.When Cox united the two groups, 11-year-old Devin Powell said, their ideas “slapped together like a peanut butter and jelly sandwich.”How about a “UVC Light Sanitizing Lunchbox”?They now have a patent pending, for real. They have a prototype, complete with a UVC light switch and a safety switch that makes sure the light is on only when the box is closed.“We put our minds to it,” 12-year-old Malik Ross said. “We took it seriously.”If the story had ended at this point, Cox would have been more than satisfied.She’d watched them taking their markers to whiteboards, filling them with their ideas, working as teams.“I’d never had a team that brainstormed like this for weeks,” Cox said. “You could feel a sense of wonderment. They kept going and going.“It was magical.”Then came “the whirlwind.”One of those corporations trying to nurture future engineers, scientists and mathematicians — Time Warner Cable — was looking for talent for a national media campaign.Los Angeles producers, tipped by local Time Warner reps, wanted a look at the Kansas City kids. According to the pace things seem to move in L.A., Cox said, she scrambled to get team members together to talk by Skype during their winter break the day after Christmas. The producers, duly impressed, wanted Isis and 11-year-old Ma’Kese Wesley to represent the team.Two days after New Year’s Day, the girls and some of their family members were on a plane to L.A. — Ma’Kese’s first plane trip in her life.They saw it all — the strange streetwalkers, the guy with pink-spiked hair cradling a pink-spiked-hair cat, the wannabe actors in movie costumes pressing passers-by to pose for novelty portraits. They got acting advice from “Batman.”Time Warner’s media campaign features Black Eyed Peas performer will.i.am, and the girls went to his studio in his “humongous” house to film the promotional spots.At one point the girls mentioned the musical work their robotics team had included in the science project.He stopped everything, Ma’Kese said, mimicking will.i.am’s arms-crossed pose, “and he said, ‘So you rap?’”Because, as he told the girls, one never puts off inspiration, they immediately took to his music studio and in moments he was rapping with Isis’ lyrics.“Do you really wanna know what’s going on? Bacteria’s messin’ with our melon zone…”Barely a month later, with the rap rhythm still beating in their hearts, the White House called, summoning the girls and the robot team’s lunchbox to be part of the White House Science Fair.Both girls described themselves as “freaking out again,” catching their breath in self pep talks, preparing to meet the president.“I’m telling myself, ‘It’s all business,’ ” Isis said. “ ‘Stay focused. Make eye contact.’ ”After waiting seemingly hours with other presenters in the State Dining Room of the White House, he was there, so tall, they said. Smiling. Shaking their hands.“His hands were all soft,” Ma’Kese said.Their team’s lunchbox now has a label affixed with a note and an arrow pointing to the front left corner: “President touched here.”It’ll be hard to top all this. Next year’s robotics team likely won’t be crossing the country by jet. But team members will join Cox in recruiting a new class to join in for the same reasons they joined.They are thrilled to be part of the message that so many people all the way up to the president are trumpeting about the power of science.“It happened for our kids from Kansas City,” Cox said. “It’s the best feeling in the world.”
Posted by Mercury at 10:05 AM