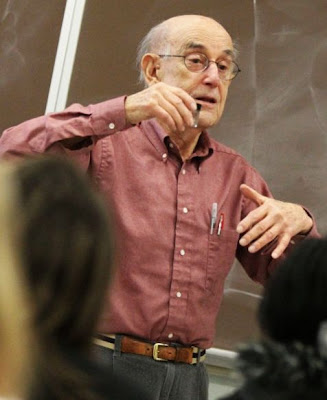 "Chemistry teacher still going at 93"byJim CarneyFeb. 12, 2012 | Akron Beacon Journal
Henry "Hank" Stevens stands in a chemistry lab at the University of Akron.A dozen students at desks in front of him await his instruction. A chart of the Periodic Table of the Elements covers part of the wall to his side.For Stevens, teaching chemistry, being around young people and staying busy has been an elemental part of his life for a long time. A very long time.Stevens, who will turn 94 in April, is the oldest employee on campus. For parts of six decades, he has taught chemistry at UA. He thinks he "remains young" by helping students, often 75 years younger than him, understand chemistry."I enjoy the contact with young people," said Stevens, a Vienna native who immigrated to the U.S. in 1939 after serving in the Austrian army.He received his undergraduate degree in chemistry from Columbia University, married his wife, Jean, and moved to Barberton in 1941 to work for Columbia Southern, which became PPG. Later, he moved to Akron and received his master's and doctorate degrees in chemistry from Western Reserve University while working at PPG.His first stint as a part-time faculty member was from 1954 to 1963, when he taught doctoral students in the graduate school.One of his first students was Frank Kelley in a polymer science class. Kelley later became dean of UA's College of Polymer Science.Stevens retired from PPG following a 42-year career in which he occupied a variety of positions, including chemist, and worked with universities across the country on technology transfer. He began teaching again in 1986 and still teaches one class per semester.Stevens has taught in the graduate and undergraduate schools at UA as well as through Summit College, where this year he is teaching two sessions of a basic chemistry laboratory.Throughout the years, he has taught general organic and biochemistry, organic chemistry as well as many other classes.This semester, Stevens is at UA five hours per week, split evenly between the two labs.But teaching isn't the only activity that keeps him busy. He is a choir member at Westminster Presbyterian Church and at the University of Akron Symphony Choir.He gives back in other ways, as well.The father, grandfather and great-grandfather regularly visits the sick at the Rockynol Retirement Community, where he resides in the independent-living section.And he gives back through the Dr. Henry C. and Mrs. Jean Stevens Chemistry Fellowship he established in 2006, about a year before his wife died. The foundation is designed to attract highly qualified students to UA's doctoral program in chemistry.Every year, about $2,000 is given to UA students, he said. University officials said $14,000 has been awarded since the fellowship was established. Every year, he said he invests the money that he is required to take out of his IRA back into the fellowship.Lori Kraft, associate professor of general technology in Summit College's Department of Engineering and Science Technology, said she hopes she is as active as Stevens when she is in her 90s."He is an inspiration," she said. "He told me the kids make him feel young, so I think that is a big motivating factor to have him come back to the lab every week."Stevens said the bottom line is he likes to stay busy."I'm a person who wouldn't sit around," he said. "I need to do something. ... The idea of sitting in front of the tube and having nothing to do doesn't appeal to me."Academic life after retirement...way to go Ed Gerjuoy
Posted by Mercury at 3:34 PM