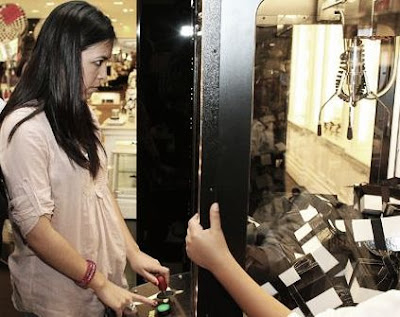 "How Do You Win the Claw Game?"by Forrest WickmanFebruary 7th, 2012Slate
An Australian 3-year-old climbed inside a coin-operated claw game at a family restaurant Sunday, and proceeded to hand out the game’s candies and toys. Similarly frustrated players have busted into claw machines in Wisconsin and Minnesota over the last few years. If you’re playing by the rules, what’s the best way to grab a prize with the claw?It depends on the machine. Claw games can be adjusted to make the prizes either easier or harder to grab. The difficulty is controlled by setting the length of time allotted for each attempt and the number of attempts given for each quarter spent. Operators can also change the strength of the claw’s grip. Given these variables, claw-game experts recommend spending a few minutes on the sideline while others play. Once you have a sense of the machine’s idiosyncrasies, ask a partner to stand on one side of the machine to help you align your claw on the depth axis. If the prize is a plush toy or stuffed animal, aim for the chest, which allows for the firmest grip. If the claw has a weak grip, try knocking objects sideways into the prize chute. Experts differ as to whether it’s easier to win with a three-pronged or a four-pronged claw.There are other ways that a claw-game operator can tweak the odds. In some machines, the prizes are crammed together such that it requires more force to pull them out. According to the British TV show Brainiac, some claw machines (or “fairground grabbers,” as they’re known in the United Kingdom) are programmed so that they only maintain a firm grip on every fifth or 10th play; they’re guaranteed to drop the prizes the rest of the time. Whatever their methods, claw-machine operators lean toward settings that allow a ratio of about $3 worth of prizes doled out for every $10 in revenue.While claw games have been compared to kiddy slot machines by critics, the law considers them to be to be games of skill, as opposed to games of chance. In several states, so-called “Chuck E. Cheese laws” ensure that children’s arcade games won’t be tagged with regulations designed for casinos. (Even under these rules, claw games are illegal when they don’t give players a fair shot.)Claw crane [Wikipedia]
Posted by Mercury at 12:02 PM