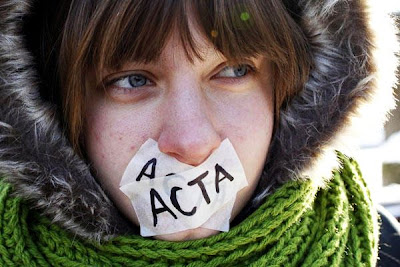 "Europe's Internet revolt: protesters see threats in antipiracy treaty"Anger over proposed antipiracy treaty ACTA was expected to bring thousands to Europe's streets today. Supporters say it will better protect intellectual labor, while opponents see free speech threats. by Jason WalshFebruary 11th, 2012 The Christian Science Monitor
Despite freezing conditions across much of the Continent, thousands are expected to the streets of European cities today – but the protests aren't about austerity measures, bailouts, or the Middle East. They are about an obscure international copyright agreement that protesters say threatens free speech online and the future of the Internet. ACTA, the Anti-Counterfeiting Trade Agreement, follows the now-delayed US legislation Stop Online Piracy Act (SOPA) and Protect IP Act (PIPA). Proponents say the agreement will protect the economic value of intellectual and artistic labor and create a framework to enforce existing laws. Opponents counter that it forces Internet service providers (ISPs) to police users, threatening individual freedom. Confusion reigns: previous drafts of ACTA would have required ISPs to disconnect users who repeatedly downloaded copyrighted material without permission, but the most recent versions leave the question of ISPs' legal liability to the participating countries. Other controversial measures, such as searches for counterfeit goods at border crossings, which many feared would apply to the contents of laptops and MP3 players, are restricted to commercial goods shipping. The European Commission and US Trade Representative have both issued "myth-busting" documents attempting to allay the worst fears.Despite this and changes to the text, ACTA remains a heated point of contention.Sebastian Meyer, attorney with law firm Brandi in Bielefeld, Germany, says the entire affair would have benefited from greater transparency. "I find it quite interesting that most persons who protest against ACTA focus on the way the text was negotiated. The other major issue seems [to be] – from the perspective of the protesting persons – the fear of a tighter surveillance of Internet usage. However, protesters have to accept that the Internet is neither a legal vacuum nor unlegislated area," he says.
Posted by Mercury at 5:21 AM