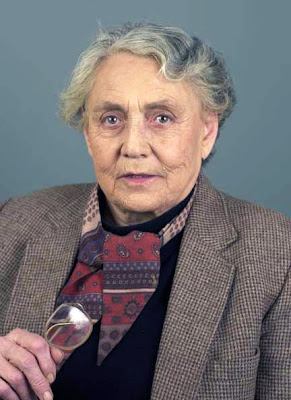 Ruth Barcan Marcus 1921 to February 19th, 2012"Ruth Barcan Marcus"byHoon Pyo Jeon and Jane Darby MentonFebruary 21st, 2012Yale Daily News
Ruth Barcan Marcus GRD ’46, a Yale professor of philosophy and pioneer in the field of quantitative modal logic, died Sunday at her home in New Haven. She was 90.One of Yale’s first female professors, Marcus helped carve a place for women in academia, and her groundbreaking research in the philosophy of language, ethics, metaphysics and epistemology put her at the forefront of her field. To her students and colleagues, Marcus was an academic visionary and an inspirational mentor.“She had a kind of personal integrity and intellectual integrity that just shone through,” said Don Garrett GRD ’79, chair of New York University’s department of philosophy and one of Marcus’ former students. “People sometimes found her intellectually intimidating, but anyone who knew her knew that she was a very dear person with a very clear mind — the most logical of philosophers and philosophical of logicians.”Marcus began her revolutionary work in modal logic during the late 1940s when she developed the Barcan formula, which brought a quantitative dimension to the field. Though Marcus initially came under fire for her radical ideas, she continued her research and eventually drew scholarly recognition and acceptance for her work, her colleagues said.Born in New York City in 1921, Marcus grew up in the Bronx and went on to attend NYU, where she graduated with a bachelor’s degree in mathematics and philosophy in 1941. Five years later, she earned a doctorate in philosophy from Yale. In 1959, Marcus took her first teaching post as a part-time professor of philosophy at Roosevelt University in Illinois, where she worked until becoming head of the philosophy department at the University of Illinois at Chicago in 1964. Marcus returned to Yale in 1973 as a professor of philosophy and taught in the department until her retirement in 1992.As a professor, Marcus was known for her toughness, but also for her open and supportive attitude.While former students said they initially found her intimidating, they added that they quickly recognized Marcus’ warm, generous and funny personality. Former students also described Marcus as an excellent mentor — particularly to women entering academia — and many said she inspired them to pursue careers in philosophy.“She was a regular mother hen to her students, coddling us along, scolding us [when] necessary,” said Diana Raffman ’75 GRD ’86, a philosophy professor at the University of Toronto and a former student of Marcus’. “The world is a poorer and much smaller place without Ruth in it.”In addition to holding multiple professorships, Marcus also served as chair of the American Philosophical Association from 1976-’83. While serving in the post, she continued to influence the field of philosophy by increasing transparency in hiring practices at academic institutions across the country. She won numerous accolades for her work, including the Guggenheim Fellowship, Yale’s Wilbur Cross Medal and the American Philosophical Association’s Quinn Prize for service to philosophy.Walter Sinnott-Armstrong GRD ’82, a philosophy professor at Duke and one of Marcus’ former students, described her as an original thinker whose contributions to logic created a new branch of philosophy.“She started off way ahead of the philosophical crowd and led them in new directions,” Sinnott-Armstrong said.Colleagues said Marcus influenced all those around her, even beyond her field. Michael Della Rocca, a Yale professor of philosophy who joined the department the year before Marcus retired, said she always supported her younger colleagues, including him.Marcus’ talents were not confined to the academic arena — she was also an excellent athlete. As a student at NYU, she was a champion fencer and would have competed at the Olympics had the games not been cancelled because of World War II. Longtime friend and colleague Robert Fogelin GRD ’60 recalled that their squash games were as intense as their intellectual debates.Friends and family said they remember Marcus as someone who was equally devoted to her personal and professional lives, adding that her strong will and love of learning were her defining traits.“I think she will always be a model of the philosophical life,” Sinnott-Armstrong said. “She showed how one can be a serious philosopher with very high standards and a compassionate person.”Marcus is survived by her children, Jim, Peter, Katherine and Libby.

"Ruth Barcan Marcus, Philosopher-Logician, Dies at 90"byMargalit FoxMarch 13th, 2012The New York Times
Ruth Barcan Marcus, a philosopher esteemed for her advances in logic, a traditionally male-dominated subset of a traditionally male-dominated field, died on Feb. 19 at her home in New Haven. She was 90.Her death was announced by Yale University, from which she retired in 1992 as the Reuben Post Halleck professor of philosophy.Because of its affinities with mathematics and the hard sciences — disciplines historically unwelcoming to women — logic had long been one of philosophy’s most swaggering strains. For a woman of Professor Marcus’s generation to elbow her way into the field, then dominated by titans like Willard Van Orman Quine, Rudolf Carnap and Kurt Gödel, was almost unheard of.“The rest of philosophy became less male dominated, less macho, more quickly than logic,” Stephen Neale, distinguished professor of philosophy at the City University of New York Graduate Center, said in a telephone interview. “She was working in a field which was really run by these giants.”Professor Marcus was hailed by colleagues for her work in quantified modal logic. The field was born of the marriage of two existing systems, classical quantified logic and modal logic — a marriage she helped bring about.Quantified logic centers on the roles of words of quantification, like “all,” “every” and “some,” in logical statements. An example of a quantified statement is the sentence “All humans are mortal.”Modal logic, by contrast, is concerned with different “modes” of truth — possibility, impossibility, necessity and the like — and the words that convey them. The sentence “Necessarily, humans are mortal” is an example of a modal statement.In the early 1940s, Professor Quine, who taught at Harvard, argued that combining quantifiers and modals produced unintelligible results. Later observers also noted the potential for ambiguity.“Once you combine ‘necessarily’ with ‘All humans are mortal,’ ” Professor Neale explained, “there are actually two ways of doing it: ‘Necessarily, all humans are mortal’ and ‘All humans are necessarily mortal.’ They sound the same, and a grammarian would say, ‘What’s the difference?’ But in logic they’re quite different.”The difference hinges on how much of the sentence the modal word modifies. In Sentence 1, “Necessarily, all humans are mortal,” the word “necessarily” casts a wide semantic net: it takes into account not only the real world, but also any hypothetical ones.“The comma is a giveaway,” Professor Neale said. “You’re saying, ‘In every possible world, everything that’s a human in that world is mortal.’ ”In Sentence 2, “All humans are necessarily mortal,” “necessarily” has a narrower scope: it ignores the merely possible and attends only to what actually exists. This sentence means, roughly, “Every human (who actually exists in this world) has the property of being mortal (in every world).”Such issues may seem of small consequence, but the need to talk about them is necessarily the meat of philosophical logic. In the literary arena, questions like these are played out masterfully in the work of Lewis Carroll and Jorge Luis Borges. But philosophy itself lacked a formal framework that would make rigorous discussion possible.Working independently in the mid-1940s, both Professor Marcus and Professor Carnap, who taught at the University of Chicago, devised such frameworks by combining classical quantified logic and modal logic. Professor Carnap’s system was rooted primarily in semantics, Professor Marcus’s primarily in formal logic.“She was the first person to lay down in rigorous fashion a precisely defined system of rules for reasoning with modal and quantificational notions,” said Kit Fine, Silver professor of philosophy and mathematics at New York University.Professor Marcus’s system, first published under her maiden name, included what came to be known as the Barcan formula. Where Professor Quine had argued that sentences like No. 2 above were unintelligible, the Barcan formula (together with its converse) renders the first and second sentences logically equivalent.Under her formula, “the second one entails the first one,” Professor Neale explained. “That is, if all humans are necessarily mortal, then necessarily, all humans are mortal.”Like much else in logic, however, the plausibility of the Barcan formula remains the subject of continuing debate.In other work, Professor Marcus examined the philosophical arguments underpinning moral dilemmas.Ruth Charlotte Barcan was born in the Bronx on Aug. 21, 1921, into a satisfying atmosphere of questioning and debate. Her father was a typesetter at The Jewish Daily Forward; a bust of the Barcan household saint, the labor leader Eugene V. Debs, presided over the living room.She earned a bachelor’s degree in mathematics and philosophy from New York University, where she was a champion fencer, followed by master’s and doctoral degrees in philosophy from Yale.An outspoken advocate for women in philosophy, she taught at what is now the University of Illinois at Chicago and at Northwestern University before joining the Yale faculty in 1973. In retirement, Professor Marcus also taught at the University of California, Irvine.Professor Marcus’s marriage to Jules Marcus, a physicist, ended in divorce. She is survived by two sons, James and Peter; two daughters, Katherine Marcus and Libby Marcus; a sister, Hilda Fishback; and three grandchildren.Ruth Barcan Marcus [Wikipedia]