Atheists have rights too 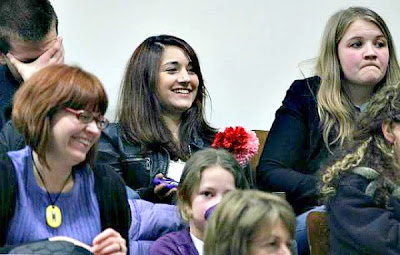 Jessica Ahlquist, top center, sits amid supporters during a school committee meeting at Cranston High School in Cranston, R.I."Prayer banner: Atheist teen speaks out, lands $44,000 scholarship"by Rene LynchFebruary 22nd, 2012Los Angeles Times
A Rhode Island teen is learning that it pays to deny the existence of God: Prominent atheists plan to present Jessica Ahlquist with a scholarship of at least $44,000 -- and possibly more.It seems they were impressed with the way Ahlquist, 16, handled herself amid a roiling controversy that began in July 2010, when she complained about a prayer banner hanging in the auditorium at Cranston High School West that referred to "Our Heavenly Father."School authorities brushed off her complaint, saying the banner was artistic and historic, as it had been hanging there for decades. Ahlquist later joined the American Civil Liberties Union in a suit alleging that the banner made her feel "ostracized and out of place."After much legal wrangling, a court ruled that the banner needed to be removed -- and an uproar ensued.The controversy helped Ahlquist, an atheist, collect thousands of friends and followers on Facebook and Twitter.But it also sparked outrage on behalf of many others who embraced the banner and wanted the school district to stand firm. A state legislator called Ahlquist an "evil little thing." There were death threats. The financially strapped school district spent tens of thousands on legal fees. And recall threats were lodged against the school board.Those school board jobs are still in jeopardy; the district voted last week to end the appeals process to save money.Blogger Hemant Mehta who writes the Friendly Atheist started a campaign to raise scholarship money for Ahlquist, and the American Humanist Assn. is also helping to oversee the fund-raising effort, which runs through the end of the month."The way she has handled herself throughout this whole ordeal is admirable far beyond anything most people would expect from a high school student," Mehta wrote.So far, the fund has raised $44,000 for Ahlquist. Mehta and the association say she earned the scholarship by standing up to critics "with class and style."