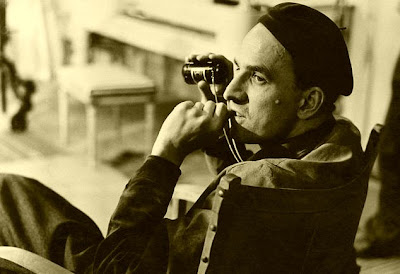 One of the world's greatest directors. I am a big folower of Bergman, especially the early introspective years. It is ironic that Bergman was introduced to the world via Kroger Babb's distribution of Summer with Monika [ Kroger Babb and exploitation ].

Today is the birthday of Swedish director and writer Ingmar Bergman, born in Uppsala (1918). His father was a very strict Lutheran minister who gave out harsh punishments for even the smallest childhood misdeeds, and Bergman lost his religious faith by the age of eight. When he was nine, he traded his toy soldiers for a "magic lantern," a rudimentary projector, and began putting on shows.He studied theater in college, and made his way into the film business in 1941, rewriting screenplays. Over the next decade, he wrote and directed more than a dozen movies. His first big international success came in 1955, with Smiles of a Summer Night, which won the Grand Prix at the Cannes Film Festival. The Seventh Seal and Wild Strawberries followed in 1957.Bergman became known for making films about mortality and isolation. In a 2004 interview, he admitted that he couldn't watch his films anymore because he found them depressing. He influenced an entire generation of young filmmakers, including Martin Scorsese, who said, "If you were alive in the '50s and the '60s and of a certain age, a teenager on your way to becoming an adult, and you wanted to make films, I don't see how you couldn't be influenced by Bergman." And Woody Allen called Bergman "probably the greatest film artist, all things considered, since the invention of the motion picture camera."

The end comes for all, but there are questions

"Det sjunde inseglet"--"Spirit In The Sky"

And this short letter to Bergman from Stanley Kubrick...

[Thanks to Patrick Neas]


You are the greatest film-maker at work todayStanley Kubrick wrote the following gushing letter of praise in 1960 to the man he considered to be "the greatest film-maker at work today," and who he later cited as a major influence on his work: Ingmar Bergman. Bear in mind also that Kubrick was only 31 years of age at the time and yet to produce the masterpieces he is now widely remembered for; Bergman was ten years his senior. Altogether a wonderful snapshot.I understand the letter is currently held at Berlin's Deutsche Kinemathek – Museum für Film und Fernsehen. 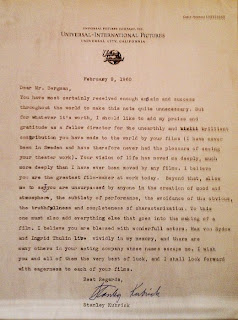 Transcript follows. Enormous thanks to Max Eichel for supplying the image.

Dear Mr. Bergman,    You have most certainly received enough acclaim and success throughout the world to make this note quite unnecessary. But for whatever it's worth, I should like to add my praise and gratitude as a fellow director for the unearthly and brilliant contribution you have made to the world by your films (I have never been in Sweden and have therefore never had the pleasure of seeing your theater work). Your vision of life has moved me deeply, much more deeply than I have ever been moved by any films. I believe you are the greatest film-maker at work today. Beyond that, allow me to say you are unsurpassed by anyone in the creation of mood and atmosphere, the subtlety of performance, the avoidance of the obvious, the truthfullness and completeness of characterization. To this one must also add everything else that goes into the making of a film. I believe you are blessed with wonderfull actors. Max von Sydow and Ingrid Thulin live vividly in my memory, and there are many others in your acting company whose names escape me. I wish you and all of them the very best of luck, and I shall look forward with eagerness to each of your films.Best Regards,(Signed, 'Stanley Kubrick')Stanley Kubrick