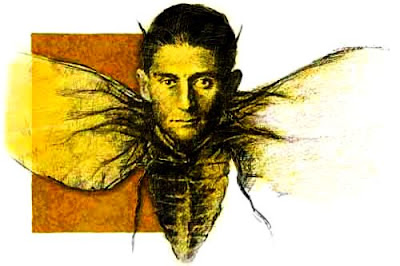 Much admired by the counter culture of the 60s...Existential representation by Franz Kafka.

The Writer's Almanac...
Today is the birthday of Franz Kafka, born in Prague (1883). He was unhappy for most of his life: terrified of his tyrannical father, plagued by a whole host of psychosomatic illnesses, and tormented by guilt and anxiety. He described himself as "peevish, miserable, silent, discontented, and sickly." He wrote surreal, dark, and pessimistic stories like "The Metamorphosis" (1915), "In the Penal Colony" (1919), and "The Trial" (1925). That's the image of Kafka that generally survives today.But he was also a productive and well-liked employee at an insurance company, and worked tirelessly to prevent workplace accidents in the lumber industry. He kept up a rigorous fitness regimen and loved fresh air: "I row, ride, swim, lie in the sun. Therefore my calves are good, my thighs not bad, my belly will pass muster, but my chest is very shabby." And he found love and happiness in the last year of his life, with a woman named Dora Diamant. Even though Kafka was suffering excruciating pain from tuberculosis, Diamant later said, "Everything was done with laughter," and "Kafka was always cheerful. He liked to play; he was a born playmate, always ready for some fun."