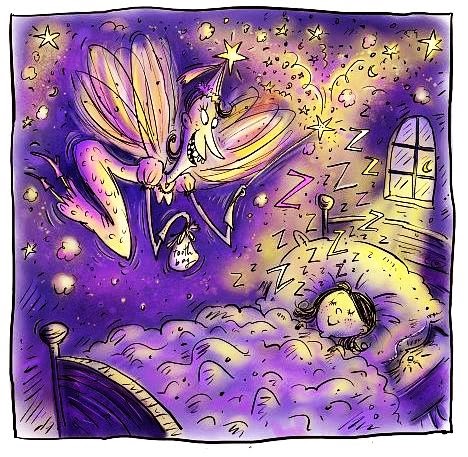 In the United States, kids drop a lost tooth under theirs pillows, and the Tooth Fairy brings them a monetary reward. But, says Michael Hingston writing for Salon, “every recorded human culture has some kind of tradition surrounding the disposal of a child’s lost baby teeth.” Globally, these tooth-shedding rituals are as diverse as you'd expect. So how did Americans end up with the Tooth Fairy?

According to Hingston, the Tooth Fairy is a wholly American creation, an amalgamation of the traditions other cultures, blended together and sparked up with a bit of Disney magic.

At the core of the Tooth Fairy is a mouse:


Perhaps the most widely practiced ritual, one that has been documented everywhere from Russia to New Zealand to Mexico, involves offering the lost tooth as a sacrifice to a mouse or rat, in the hopes that the child’s adult teeth will grow in as strong and sturdy as the rodent’s — a wish for transference that anthropologists call “sympathetic magic.””

… In many countries around the world, children continue to leave teeth out in the hopes that a mouse will come take them away in exchange for money or some other gift.

Layered on top, says Hingston, is the veneer of the fairy, a traditionally European folk character. But just like Coca-Cola had a hand in defining the look of Santa Claus, it was Disney that helped the Tooth Fairy stick.

It’s no coincidence that at the same time the tooth fairy was starting to gain traction in the United States, Disney was also releasing animated films like “Pinocchio” and “Cinderella” — each of which features a benevolent, maternal fairy with the power to make wishes come true. Pop culture helped solidify the tooth fairy in the mainstream, and she’s been a fixture there ever since.

Email ThisBlogThis!Share to TwitterShare to FacebookShare to Pinterest
Labels: mythology, the Tooth Fairy