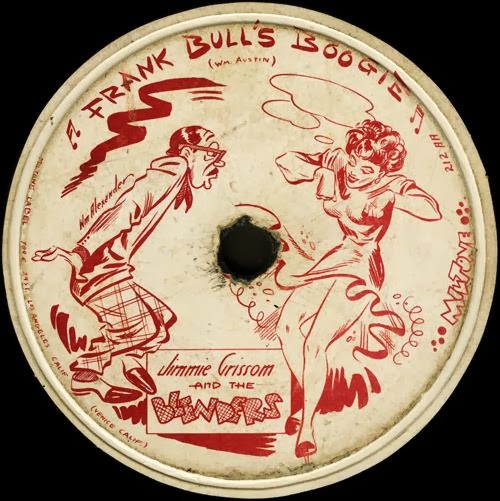 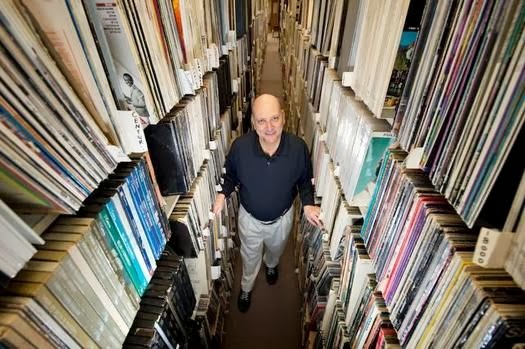 "A collection on the move: UMKC’s massive Marr Sound Archives will move into a ‘robot’"

Chuck Haddix strolled up and down the aisles between the towering stacks of recordings stored at the Marr Sound Archives, like a general inspecting his troops.

Being surrounded by the treasure-filled shelves — rows and rows of radio broadcasts and music recordings on vinyl, shellac, acetate, metal and glass — seemed to flip a switch in Haddix, and he couldn’t stop talking about the sound locked in the grooves of the preserved discs.

“During World War II when aluminum was scarce, record discs were made of glass,” Haddix, the archives’ director, said. Aluminum, then later glass, formed the interior of records covered with cellulose nitrate, sometimes known as lacquer, which was grooved with the recording.

Because glass discs were easily broken, the ones tucked carefully into acid-free jackets on the Marr archives’ shelves are rare.

Honed by decades of radio broadcasting, Haddix’s voice — smooth like molasses and heavy with bass — filled the 1,341 square feet of space in the ground floor of Miller Nichols Library at the University of Missouri-Kansas City.

But in a few more years, this scene won’t exist. The thousands of discs — one of the largest archived collections of recorded sound in the country — are being relocated to the library’s third floor, where they will be housed in the university’s gargantuan, robotic storage unit.

The unprecedented move will give the discs digital identities and better preserve the collection, but visitors will no longer be able to stand amid its vastness.

Until then, a view of the archives is still available through the broad window separating the stacks — seven shelves high, in rows 45 feet long — from the listening room where the public can play some of these recordings. Haddix admits he’ll miss the opportunities to talk about the collection while surrounded by the vinegary smell of acetate, just an arm’s length from recorded history.

Somewhere in the middle of one row, Haddix stopped midsentence. He reached out and slid a white paper disc jacket from a shelf about eye level and gingerly revealed the 10-inch, glossy black disc inside.

It’s a mid-1920s George Lee Orchestra recording on the Meritt record label, one of the most precious and obscure pieces in the archives, he said.

It’s important because Meritt, once at 18th Street and Highland Avenue, “is responsible for the first phonograph recordings ever made in Kansas City,” said Haddix, 62. The Marr archives have the only known collection of Meritt records.

As carefully as he’d removed it, Haddix slipped the black disc back into its sleeve and onto the shelf.

The need to preserve

Not every piece in the special collections will have a place in the robot, though. Some of the most delicate records won’t be there, and neither will the collection’s nearly 400-year-old — 1629 to be exact — chant book. It was a gift from a faculty member.

The large leather-bound, hand-painted vellum book of Latin chants is one of the oldest items in the collection. Hinds keeps it on a rolling cart near the entrance to the special collection’s storage room.

“In the case of fire this would be the first thing I run back and roll out of here,” Hinds said.

The move into robotic storage is the first time known to archivists that a record collection the likes of the Marr Archives has been taken off the stacks and put into a giant electronic retrieval system. The new space will be triple the size of the archives’ current space.

While music is the bulk of the sound archives, which includes 350,000 recordings, other trophy pieces are involved, including photos and manuscripts and recordings such as a radio broadcast of Joplin-born African-American poet Langston Hughes reading his work.

Sam Brylawski, chairman of the National Recording Preservation Board and a sound archivist with the University of California, Santa Barbara, said lots of other libraries with recorded sound collections have moved collections off-site, storing discs in temperature-controlled warehouses.

Stuart Hinds, director of the LaBudde Special Collections, said housing the collection in the robot will make access easier for folks who, say, want to hear a 1941, one-of-a-kind recording of Charlie Parker in rehearsal playing early bebop with Jay McShann, and at the same time peruse corresponding photographs and manuscripts about Parker.

Kelley Martin, library specialist at the archives, plans to document the move for posterity. It’s not just packing up a bunch of boxes and hauling them a few floors up. No way the archives’ records could be supported on an upper-level floor, Martin said. “They are just way too heavy.”

That’s why they need to go in to the library’s giant robotic retrieval system.

The robot is like an enormous silo four stories high and enclosed in a library addition built in 2011.

Inside the silo are stories of metal shelves or flats holding bins of varying sizes. Archived pieces would be stored in these bins. The robot’s arm resembles a monster-sized, movable forklift that responds to computer commands.

When a record is requested, a computer tells the arm where in the silo to find it. The arm brings out a flat holding the bin with the material requested.

Doing that means every single piece has to first be digitally cataloged. Album jackets, some of which are valuable art, have to be protected by plastic. Then a bar code is attached to the plastic before it’s stored in the robot.

The work already has begun. In January, library specialists and students finished a dry run of the process of storing select pieces in the robot.

The silo already holds the university’s library books. The floors emptied of books were replaced with study rooms and lounge chairs.

Moving the archives will open up the ground floor and give the collection room to grow, Martin said. “As it is we are fighting for space. New collections are coming in all the time.”

But some sacrifice comes with the change.

Once the move is made, what Martin calls “the wow factor” — the rows and rows of vinyl visible now — will be gone. All of it stashed in boxes, stored in a temperature-controlled storage shaft amidst the books and other library materials retrievable only by the giant mechanical arm of the Miller Nichols Library’s robot.

“It’s like the romance will be gone,” said Brylawski, who has visted the Marr Sound Archives several times and loves the sight of so many records in one place.

“But I also feel like we are preserving (the collections),” Martin added. “And when it gets down to it, as a preservationist, preservation outweighs wow factor.”

Besides, she said archives visitors never could actually walk among the stacks the way she and Haddix do periodically. Visitors could only peer through the listening room window, pass the antique disc-playing machines, including a 19th-century Polyphon music box and trumpet phonographs flaunting finely painted opera heads.

The archives are named for Nebraska native Gaylord Marr, a disenchanted actor, director and theater operator who turned to teaching.

Marr taught writing, communications, and the history of media at UMKC for 27 years. During his tenure at the university, Marr, an intellectually demanding professor who was loved by his students, amassed a substantial collection of sound recordings that he used in class.

“The collection quickly outgrew its original location in two rooms on the second floor of the general library,” Hinds said. “When the library was renovated in 1992, the sound archives moved to the ground floor.”

Haddix, who teaches music history at the Kansas City Art Institute and recently wrote his second book “Bird: The Life and Music of Charlie Parker,” joined the archives in 1987. He was originally hired as the sound archivist, “but, since it was a one-person shop, he wore all the hats,” Hinds said. Haddix’s title was later changed to director.

Under his direction, what started as a music lover and researcher’s donation to special collections has grown to serve the world, Hinds said.

Over the years scores of music lovers and researchers passing through Kansas City have stopped in to handle and hear an actual LP recording of a particular work or musician.

“Marr has an incredible jazz and blues collection,” Brylawski said. “Particularly, the unpublished stuff. They have material at Marr that the Library of Congress doesn’t have. I’m sure of that.”

A lot of times it’s some of the same music that folks hear on Friday and Saturday nights, when Haddix becomes Chuck Haddock at the four-hour “Fish Fry” program on KCUR. He plays a mixture of soul, rhythm, blues, jumpin’ jive and zydeco and brings his “music party” to the radio waves.

Minutes before the 8 p.m. air time recently, Haddix, with a scruffy leather bag slung over one shoulder and a beat-up record box in his hand, entered the KCUR studios on Troost Avenue.

Under his jacket he wore his usual “Fish Fry” T-shirt over some khaki slacks.

From the bag he pulled out a stack of albums, most from his own archive of music he’s been collecting since his teens. He took from the record box more LPs, some CDs and a pair of well-worn slippers that he dropped to the floor and slid his feet into.

Then he goes about organizing the music he had planned out days before to share with the night’s audience. The music pours into the studio and out over the airwaves. Haddix rocks his head, pats his feet, snaps his fingers and sings along.

“I’d be doing the same thing if I were at home, sitting and listening to my music. Here it’s just me, a glass of water and the music.”
The minute he opens his mouth, his soothing tone invites listeners to join him on a musical journey to places they might not have been — a juke joint in the deep South or a New Orleans bayou, 1960s Harlem, or Motown (Detroit).

“Chuck has been such a great weekend night presence for us,” said Nico Leone, station manager at KCUR. “He is just so knowledgable. He’s been a centerpiece of our weekend programing for years.”
Haddix is comfortable surrounded by the music; listening to it, walking through it, talking about it.

As a teenager growing up in Kansas City, Haddix worked at Penny Lane records in Westport. That’s where he got to know the record collectors in town. Those are some of the same folks he knows are listening and grooving with him on “Fish Fry” nights.

When the time comes to preserve the gems in their collections, they know to call Haddix, to help keep his beloved archives growing.
Posted by Mercury at 6:49 AM