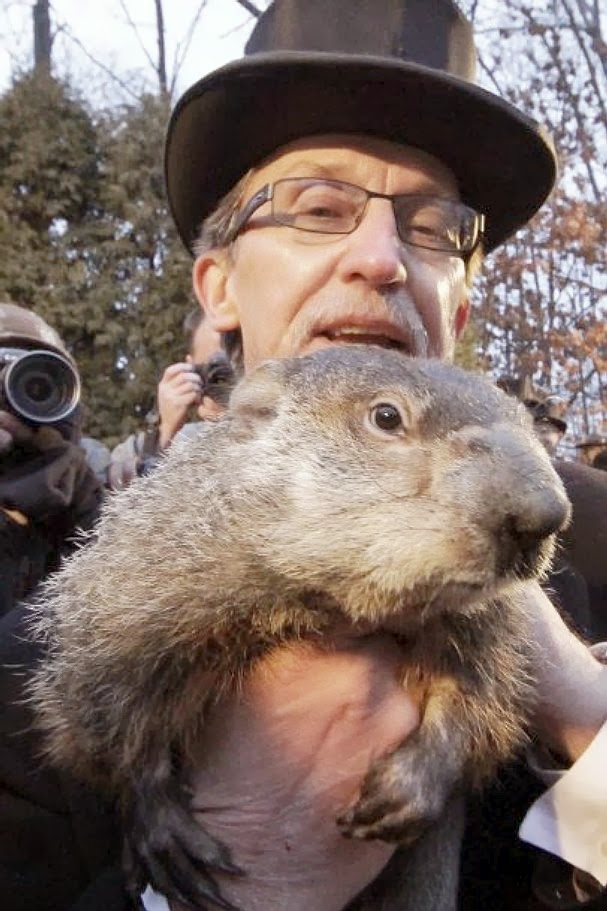 Skin and quarter your Wood Chuck and par boil him in salted water for 20-30 min.

When Onion is translucent add,
1 can of BEER
1 cup of chicken stock
water if needed
Bring to a boil,cover, reduce heat, simmer 2-2.5 hrs.

Garnish with shredded Cheddar and Chives.

Punxsutawney Phil, the world's most famous fuzzy forecaster, popped out of his burrow Sunday morning and predicted six more weeks of winter, much to the disappointment of the crowd gathered at Gobbler's Knob in Punxsutawney, Pa.

According to folklore, if it's cloudy when the groundhog emerges, the critter will leave his burrow, signifying that winter will soon end. If it's a sunny day, Phil will supposedly see his shadow and, frightened, retreat back into his burrow, and winter will continue for six more weeks.

Phil emerged at 7:28 a.m. ET to the cheers of thousands of cheering fans who braved temperatures in the 30s to hear his prediction. Many wore knitted hats in the shape of groundhogs or had groundhog paw marks painted on their cheeks.

Phil was brought to the podium by a group of local dignitaries known as the Inner Circle, all men clad in top hats and old-fashioned black frock coats. It was the 128th time Punxsutawney Phil had made his prediction.

The Inner Circle knocked on his burrow, and he was brought out to a cheering crowd. Phil spoke in "groundhogese" to the Inner Circle and directed its president, Bill Deeley, to translate for him. Put into English, his prediction was:

"A Super Bowl winner I will not predict,

but my weather forecast you cannot contradict.

Why that's not a football but my shadow I see,

It's six more weeks of winter it must be!"

Despite the hoopla and festival atmosphere in Punxsutawney, Pa., an analysis of weather data from the National Climatic Data Center in Asheville, N.C., shows that Phil's forecasts are, on average, inaccurate.

"The groundhog has shown no talent for predicting the arrival of spring, especially in recent years," according to the center. "Phil's competitor groundhogs across the nation fared no better."

The center found that from 1988 to 2012, the groundhog was right 10 times and wrong 15 times. In other words, 10 times, the national average temperature for the remainder of February matched what would be expected based on what the groundhog predicted.

Last year, the furry rodent, also known as a woodchuck, did not see his shadow, so there should have been an early spring. Phil gets a mixed grade last year — the nation had a slightly warmer than average February but a chillier than average March.

Since 1887, the groundhog has seen his shadow 100 times (meaning six more weeks of winter), and not seen it 17 times to predict an early spring. There is no record of the prediction for nine years in the late 19th century.

Groundhog Day has its origins in an ancient celebration of Candlemas, a point midway between the winter solstice and the spring equinox, according to the climate center.

Superstition has it that fair weather was seen as a prediction of a stormy and cold second half to winter, as noted in this Old English saying:

"If Candlemas be fair and bright,

Winter has another flight.

If Candlemas brings clouds and rain,

Winter will not come again."