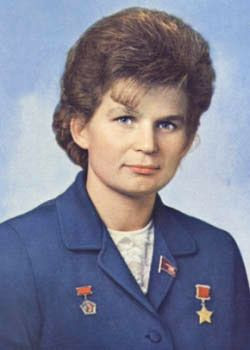 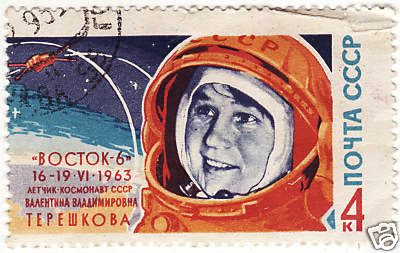 It was another Soviet first in space 50 years ago, putting a woman in orbit. And the 26-year old Valentina Tereshkova carried her part with grace, shouting "Take off your hat, sky, I'm coming!" as she blasted off.

President Vladimir Putin praised her during a meeting at his residence Friday, marking the anniversary of her flight. He awarded her the Order of Alexander Nevsky for meritorious public service, one of the highest Russian honors.

Tereshkova's three-day mission instantly made her a global celebrity and a poster image for Soviet space glory following the first man in space, Yuri Gagarin. However, behind the scenes there were strong concerns about the flight and Tereshkova's account of the mission differs dramatically from recollections of other veterans of the nation's space program.

Recalling her flight, the 76-year old cosmonaut says she felt no fear despite what she described as a glitch that might have stranded her in space. Others have faulted her performance and questioned whether she was able to deal with an emergency on descent.

Soviet space officials started considering a space mission by a woman soon after Gagarin's flight in April 1961, seeing it as another chance to advertise the nation's prowess.

To make the mission even more spectacular for propaganda purposes, Moscow decided to score another first by making it the first simultaneous flight of two spaceships. Valery Bykovsky blasted off to space on board the Vostok-5 ship on June 14, 1963 and Tereshkova followed him on June 16.

Tereshkova, who was given the call sign of Chaika (Seagull), blasted off faultlessly and stayed in good shape until day two, when flight controllers noted that she was slow or unable to fulfill their commands and looked tired and unresponsive.

"She sounded apathetic in conversations with ground control," Vladimir Yazdovsky, the chief doctor of the Soviet space program wrote in his memoirs. "She largely limited her movements and kept sitting almost motionless."

Yazdovsky said Tereshkova felt unwell because of weightlessness, and Korolyov was so concerned about her condition that he suggested an early landing. Officials decided, however, to stick to the original plan for a three-day mission.

Korolyov's deputy, Boris Chertok, later recalled in his chronicle of the Soviet space program that worries about Tereshkova were exacerbated by her failure to properly align the ship during a simulation testing her ability to perform a manual landing in case of autopilot failure during descent.

Her ship landed faultlessly in automatic mode on June 19, 1963, but Chertok said that Korolyov and others spent yet another agonizing moment when Tereshkova failed to communicate with ground controllers during the descent.

Tereshkova told reporters last week that engineers made a mistake in designing the ship's controls, which would have left her stranded if she hadn't noticed it in time.

Chertok and other top figures in the Russian space program told a sharply different story, saying that Tereshkova simply couldn't pilot the ship in manual mode during in-orbit training. Chertok recalled Tereshkova emerging teary-eyed from a private conversation during a meeting with engineers focusing on the issue.