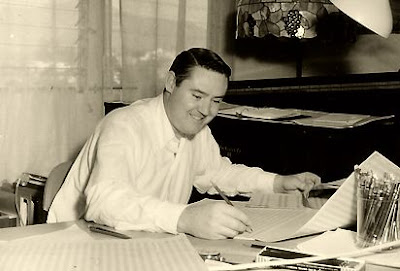 The writer and arranger provided the hi-fi soundtrack for a swinging-bachelor lifestyle coming of age in the late 1950s.

Sometime between ring-a-ding-ding and hunk-a hunk-a burning love, America slipped into something more comfortable and Bob Thompson was there to help.

Thompson was one of the foremost composers and arrangers of what came to be known as "Space Age bachelor pad" music – tunes that allowed hi-fi buffs to turn the lights down low, mix the perfect martini and show off their tweeters and woofers. With cascading strings, upbeat rhythms and – as in his piece "Mmm Nice!" – breathy female singers, Thompson's music set a mood, but was more than mood music.

"There was a crispness, a sonic clarity, a sophistication and a wryness,'' said Irwin Chusid, a record producer and New Jersey-based radio personality who in Thompson's later years was his manager and publisher. "There was humor – not in the comical sense but as musical wit."

Thompson, 88, who also wrote and arranged radio and TV commercials, died May 21 in a Los Angeles nursing home, family members said. He had Alzheimer's disease.

In the late 1950s, he signed with RCA Victor to create such albums as "On the Rocks," with a cover featuring a bikini-clad model lolling in a giant cocktail glass. They were designed to appeal to swinging young guys who wanted to test their stereos and, if they were lucky, their testosterone.

The liner notes on Thompson's 1959 "Just for Kicks" could have been penned by Hef himself:


"Picture a moonlight swim without the encumbrance of superfluous apparel; an impromptu plane flight to Las Vegas or Miami; a cha-cha contest at a lease-breaking party; an all-night discussion of philosophy while sobering up on café espresso. These are some of the things which imaginative people do 'just for kicks'!"

The music – also called Space Age pop – was often a spin on old jazz standards, equipping them with hip choral sounds and ping-ponging stereo sound effects. Thompson's 1960 album, "The Sound of Speed," was a tribute to fast living, with orchestral riffs inspired by jet engines, race cars, and in one cut, "A Streetcar Named Irving."

"Thompson was a seminal figure, a major inventor of this kind of music," said Koop Kooper, creator of "Cocktail Nation," an Australia-based podcast and radio show that highlights lounge music.

"You have to remember that the bachelor coming to the forefront of American culture was a new thing," Kooper said. "It used to be that people went off to college, met their sweethearts and got married. With the advent of Playboy, a bunch of guys realized there was a whole other lifestyle out there."

The bachelors' new music was racy without being raw.

"Space Age Pop stopped short of stripped inhibitions," Chusid wrote in notes accompanying a 1995 CD collection he assembled. "It wasn't intended to induce breathless perspiration. However raucous the arrangements might get, there was always an undercurrent that whispered: 'Relax.' "
Born Aug. 22, 1924 in San Jose, Robert Lamar Thompson grew up in rural Auburn, Calif., a town his parents thought healthier for a boy with asthma. He started learning piano at 10, teaching himself at a fairground on one he found under a tarp.

Thompson studied music for a year at UC Berkeley but later said he learned more at KGO, a San Francisco radio station where he worked his way up from pageboy to arranger for the house orchestra. He tried composing during a brief stint in Paris but, looking for steadier work, he headed back to California and wound up playing at a piano bar in Los Angeles.

He held a variety of odd musical jobs, accompanying Mae West on tour and writing the 1955 "Criswell Predicts," a swinging tribute to the busty vamp's favorite psychic.

However, perhaps he will be best remembered for what his son, Spenser Thompson, told The Times was "an incredible anomaly" – the few years he spent having hi-fi fun in the Space Age.

"It was really Dad cutting loose," he said. "His teacher used to tell him not to throw everything he had in one song, but that's kind of what Bob did. He had Space Age licks, singers, five kinds of percussion – it was, 'Let's go full throttle!' "

In addition to his son, who lives in San Francisco, Thompson is survived by his wife Paula Thompson of Los Angeles.

His work is often likened to that of Juan Garcia Esquivel, a Mexican composer and arranger who was known for his kitschy lounge sound. He died in 2002.

But Thompson drew his inspiration from Maurice Ravel, Duke Ellington, and George Gershwin, said his son, who, until he was in his 20s, never heard his father discuss his pop albums.

With the advent of rock, orchestral pop jobs withered, and music for commercials was produced by small rock ensembles instead of full orchestras, according to his son.

Occasionally troubled by depression, Thompson didn't work much after 1980, his son said.

In the mid-'90s, the bachelor-pad genre that fizzled out in the 1960s underwent a revival. "The Sound of Speed" was reissued in 2004 and Thompson's pieces started cropping up here and there. One of his songs was featured on a "Sex and the City" episode and his work was discussed on avant-garde websites and Internet radio – outlets unimagined during the Space Age.

The Song is You