Tonto and that word again..."kemosabe" 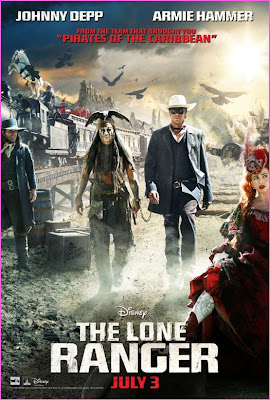 Disney's film, The Lone Ranger, will be released next week and once again a couple of items hits the news: Tonto's tribe and what does "kemosabe" mean. The following article mostly deals with the word.


"What Do You Mean “Kemosabe,” Kemosabe?"

Even if you’ve never heard or seen a single episode of Fran Striker’s early 20th-century creation The Lone Ranger—begun on the radio, continued in books and on television, and soon to hit the big screen—the term kemosabe is likely familiar to you. In the years since 1933, when the radio series premiered, the word has become ingrained in the American lexicon, finding its way into infamous jokes and kitschy songs. In one particularly Tonto-heavy trailer for the upcoming film adaptation, Johnny Depp as the faithful Native American sidekick says rather ponderously to Armie Hammer’s Lone Ranger, “Justice is what I seek, kemosabe.”

But what, exactly, does kemosabe mean? And does the word have its origins in any indigenous language? Or is it purely a white-American butchering of Native American culture?

It’s complicated. The phrase has stumped scholars and Lone Ranger fans alike for years, and there appears to be no conclusive evidence as to its true definition or its roots. (Striker himself does not seem to have offered an explanation on the record during his lifetime.) It doesn’t help that in the original series, Tonto’s own backstory was left deliberately mysterious, and throughout the franchise, his tribal identification is mostly ambiguous. (On the radio series, he was reportedly described as a Potawatomi Indian, though that tribe did not live in the southwest, where the show is set.)

Still, there are plenty of theories to go around. The Yale Book of Quotations defines the word as “faithful friend or trusty scout,” and this is the most common interpretation. (In an episode of the TV show, Tonto tells the Lone Ranger that the word “mean trusty scout.”) A 1939 Saturday Evening Post article claimed that Striker’s letters to his children always opened with the phrase “Ta-i ke-mo sah-bee,” or, “Greetings, trusty scout.”And Striker’s widow told the Hartford Courant in 1977, “I think he interpreted ‘kemo sabe’ to mean ‘good friend’ or ‘good scout.’ ”

Where did Striker get this word? It’s not clear. The Yale Book of Quotations cites a boys’ camp in Mullet Lake, Mich., named Ke Mo Sah Bee, and on separate occasions Striker’s son and daughter each suggested this might be where the show got it from. (Jim Jewell, the original series’ director, is usually credited with finding the word by those who support this hypothesis. Jewell was from Michigan.) But their mother, who admitted that her memory was “very fuzzy” (she was raising four kids while her husband was getting the series under way), said that Striker “may have just coined it from his own head.”

Or maybe not. A 1977 Smithsonian Magazine article by Lone Ranger aficionado Martha Kendall—at the time a Ph.D. student in anthropology with a concentration in American Indian languages—found a similarly “friendly” definition in a specific Native American language. Smithsonian curator and linguist Ives Goddard told her he had traced it to J.P. Harrington’s “The Ethnogeography of the Tewa Indians,” from 1916. That article includes a list of Tewa words used to denote other tribes and cultures; the word sabe is defined as “Apaches” and kema is defined as “friend.” Kendall suggests that this list could have been seen by Striker himself or a research assistant. At the time that the series was first developed, she says, “there was a variable glut of these Smithsonian volumes in used book shops, since they were distributed free to various politicians who clearly had no use for them.”

There is another theory that gives the word an entirely different meaning. Noting that tonto in Spanish means “stupid” or “crazy,” some people have pointed out that kemosabe sounds a lot like the Spanish phrase quien no sabe, “he who doesn’t understand.” (In Spanish-language versions of The Lone Ranger, Tonto is called Toro, Spanish for bull.) This suggests a whole different dynamic between the two characters. Is the Lone Ranger a racist who calls his partner an idiot? Is Tonto in turn being subversive when he addresses his white companion as an ignoramus?

The truth: probably neither. As Chadwick Allen explains in “Hero with Two Faces: The Lone Ranger as Treaty Discourse,” this interpretation has mostly been pushed by American linguists who want to “locate Tonto ‘appropriately’ in the Pueblo southwest,” and there isn’t much evidence for it. But the theory has plenty of proponents regardless. Native American writer Sherman Alexie, who is of Coeur D’Alene descent, has said that kemosabe means “idiot” in Apache. “They were calling each other ‘idiot’ all those years,” he told an interviewer in 1996, a few years after the publication of his story collection The Lone Ranger and Tonto Fistfight in Heaven. “It’s always going to be an antagonistic relationship between indigenous people and the colonial people,” he added.

There’s one other theory of note, though it’s not as well known as the first two. Alan Shaterian of University of California, Berkeley told Kendall that the word could have its roots in the Yavapai language spoken in Arizona. Striker, Shaterian says, could have visited a reservation in the state and asked people there what their word was for “a white person,” or someone who dresses in white, like the Lone Ranger. According to Shaterian, a typical Yavapai speaker would answer with kinmasaba or kinmasabeh.

In the nearly 40 years since Kendall’s piece was published, no one seems to have come any closer to a conclusive account of the phrase’s origins or intended meaning within the Lone Ranger series. Kendall herself decided she preferred “the mystery to certainty,” and perhaps the word is indeed a bit more fun that way. On a 1969 episode of The Johnny Carson Show, Carson did a sketch in which he interviewed Jay Silverheels—who portrayed Tonto on the Lone Ranger TV series—in character, for a new job at NBC. “I work 30 years as faithful sidekick for kemosabe,” Silverheels tells Carson in the bit. “Hunt, fish, make food, sew clothes, sweep up, stay awake all night, listen for enemies for kemosabe. Risk life for kemosabe. Thirty lousy years.” When Carson wonders why Tonto’s former employer let him go, the once-faithful sidekick replies, “Him find out what kemosabe mean.”
Posted by Mercury at 1:01 PM