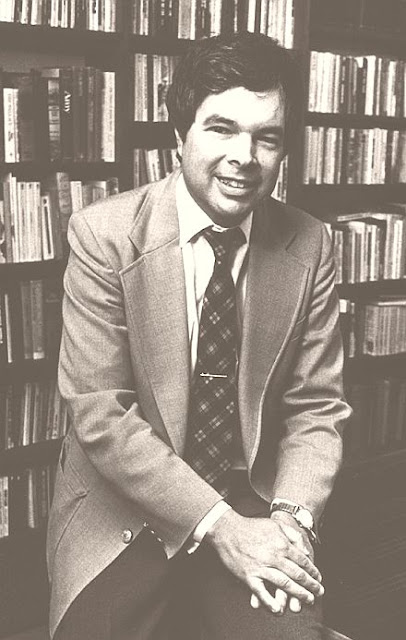 Physicist Kenneth Wilson, who earned a Nobel prize for pioneering work that changed the way physicists think about phase transitions, has died in Maine, where he retired to enjoy kayaking with his wife. He was 77.

Wilson, who died from complications of lymphoma, was in the physics department at Cornell University in Ithaca, N.Y., when he won the Nobel Prize in 1982 for applying his research in quantum physics to phase transitions, the transformation that occurs when a substance goes from, say, liquid to gas. Wilson created a mathematical tool called the renormalization group that is still widely used in physics.

The son of a Harvard University chemist, the Waltham, Mass., native joined Cornell University in 1963 and later retired from Ohio State University, where he founded the Physics Education Research Group.

His wife, Alison Brown, still recalls the morning they learned of the Nobel Prize. She said on Tuesday that she eventually had to take the phone off the hook so he could finish his breakfast.

Part of Wilson's gift was his ability to remain focused on complex problems, said Kurt Gottfried, emeritus professor of physics at Cornell. His first project at Cornell involving elementary particle physics took him about five years to complete, Gottfried said.

"He worked very difficult problems that required concentration for a long time — I mean months and years," Gottfried said.

In his down time, Wilson was an avid hiker who enjoyed treks in Swiss Alps and Italian Dolomites, as well as the mountains of New Zealand, his wife said.

Wilson didn't talk much during the hikes because he was busy working out problems, she said.

"His brain was still turning over. He was cogitating on whatever problem he was working on," she said.

The couple met through international folk dancing, a passion they both shared, while they were at Cornell, where Brown worked in the computing center.

Their love of kayaking brought them to Maine. The couple moved to Maine in 1995, residing in Gray, and Wilson remained on staff at Ohio State until retiring in 2008. He died Saturday in a nursing home in Saco, his wife said.

Physics visionary Kenneth G. Wilson, winner of the 1982 Nobel Prize in Physics for his research at Cornell, died in Maine June 15 from lymphoma complications. He was 77.

“Ken Wilson was one of a very small number of physicists who changed the way we all think, not just about specific phenomena, but about a vast range of different phenomena,” said Nobelist Steven Weinberg ’54, University of Texas physicist and astronomer.

The Nobel Prize recognized Wilson’s work on phase transitions, such as the transformation of a substance from the liquid to the gaseous state. Wilson was led to this breakthrough from his struggles with mysteries in elementary particle physics and quantum field theory, topics that would appear to have no relationship to phenomena in liquids or gases. The tools Wilson brought to bear in his research were diverse, ranging from abstract mathematics to supercomputing.

Wilson was born June 8, 1936, in Waltham, Mass. He earned his Ph.D. from the California Institute of Technology in 1961, studying under Nobelist Murray Gell-Mann. Subsequently, as a junior fellow at Harvard, while waiting for output from an MIT computer, he proved a mathematical conjecture proposed by theoretical physicist Freeman Dyson.

In 1963 Wilson joined the Cornell physics department and was soon given tenure even though he had hardly published. As he later said in his Nobel autobiography, “my very strong desire to work in quantum field theory did not seem likely to lead to quick publications; but I had already found out that I seemed to be able to get jobs even if I didn’t publish anything so I did not worry about publish or perish.”

Wilson’s Nobel Prize-winning research stemmed from work on phase transitions by Michael Fisher and Benjamin Widom at Cornell and Leo Kadanoff at the University of Illinois. Their findings motivated Wilson to ask whether his own work on quantum fields would be amenable to a similar approach, for all of these phenomena involve huge numbers of variables describing a wide range of length scales. In the 1970s, this inspired Wilson to formulate a mathematical scheme called the renormalization group, for which he received the Nobel Prize.

Following this work on phase transitions, Wilson turned again to quantum field theory and quantum chromodynamics (QCD), the newly proposed theory that protons, neutrons and other subatomic particles are composed of smaller particles called quarks. He created a version of QCD on a space-time lattice that made it possible for the first time to analyze the very strong forces that bind quarks together.

“He was decades ahead of his time with respect to computing and networks as well,” said Paul Ginsparg, professor of physics and information science, who was one of Wilson’s advisees when he was a graduate student at Cornell in the 1970s. “After inventing lattice gauge theory in 1974, he found he didn’t have adequate computing power to solve the theory numerically, so he wanted easy ways to use large numbers of parallel processors.”

So Wilson became a pioneer in the field of supercomputing, and was instrumental in the National Science Foundation’s establishment of five national scientific supercomputing centers, one of them at Cornell.

Wilson was widely recognized for other scientific accomplishments, including Israel’s Wolf Prize in Physics in 1980 and an honorary doctorate of science from Harvard University in 1981.

In 1987 Wilson left Cornell for Ohio State University, where he helped found the Physics Education Research Group. At Ohio State, he focused on physics and science education.

Wilson is survived by his wife, Alison A. Brown; his brother, David Wilson, a professor of molecular biology at Cornell; four other siblings; and a stepmother.

I was born 1936 in Waltham, Massachusetts, the son of E. Bright Wilson Jr. and Emily Buckingham Wilson. My father was on the faculty in the Chemistry Department of Harvard University; my mother had one year of graduate work in physics before her marriage. My grandfather on my mother's side was a professor of mechanical engineering at the Massachusetts Institute of Technology; my other grandfather was a lawyer, and one time Speaker of the Tennessee House of Representatives.

My schooling took place in Wellesley, Woods Hole, Massachusetts (second, third/fourth grades in two years), Shady Hill School in Cambridge, Mass. (from fifth to eighth grade), ninth grade at the Magdalen College School in Oxford, England, and tenth and twelfth grades (skipping the eleventh) at the George School in eastern Pennsylvania. Before the year in England I had read about mathematics and physics in books supplied by my father and his friends. I learned the basic principle of calculus from Mathematics and Imagination by Kasner and Newman, and went of to work through a calculus text, until I got stuck in a chapter on involutes and evolutes. Around this time I decided to become a physicist. Later (before entering college) I remember working on symbolic logic with my father; he also tried, unsuccessfully, to teach me group theory. I found high school dull. In 1952 I entered Harvard. I majored in mathematics, but studied physics (both by intent), participated in the Putnam Mathematics competition, and ran the mile for the track team (and crosscountry as well). I began research, working summers at the Woods Hole Oceanographic Institution, especially for Arnold Arons (then based at Amherst).

My graduate studies were carried out at the California Institute of Technology. I spent two years in the Kellogg Laboratory of nuclear physics, gaining experimental experience while taking theory courses; I then worked on a thesis for Murray Gell-Mann. While at Cal Tech I talked a lot with Jon Mathews, then a junior faculty member; he taught me how to use the Institute's computer; we also went on hikes together. I spent a summer at the General Atomic Company in San Diego working with Marshall Rosenbluth in plasma physics. Another summer Donald Groom (then a fellow graduate student) and I hiked the John Muir Trail in the Sierra Nevada from Yosemite Park to Mt. Whitney. After my third year I went off to Harvard to be a Junior Fellow while Gell-Mann went off to Paris. During the first year of the fellowship I went back to Cal Tech for a few months to finish my thesis. There was relatively little theoretical activity at Harvard at the time; I went often to M.I.T. to use their computer and eat lunch with the M.I.T. theory group, led by Francis Low.

In 1962 I went to CERN for a calendar year, first on my Junior Fellowship and then as a Ford Foundation fellow. Mostly, I worked but I found time to join Henry Kendall and James Bjorken on a climb of Mt. Blanc. I spent January through August of 1963 touring Europe.

I have remained at Cornell ever since, except for leaves and summer visits: I spent the 1969 - 1970 academic year at the Stanford Linear Accelerator Center, the spring of 1972 at the Institute for Advanced Study in Princeton, the fall of 1976 at the California Institute of Technology as a Fairchild Scholar, and the academic year 1979 - 80 at the IBM Zürich Laboratory.

In 1975 I met Alison Brown and in 1982 we were married. She works for Cornell Computer Services. Together with Douglas Von Houweling, then Director of Academic Computing and Geoffrey Chester of the Physics Department we initiated a computing support project based on a Floating Point Systems Array Processor. I helped write the initial Fortran Compiler for the Array Processor. Since that time I have (aside from using the array processor myself) been studying the role of large scale scientific computing in science and technology and the organizational problems connected with scientific computing. At the present time I am trying to win acceptance for a program of support for scientific computing in universities from industry and government.

I have benefitted enormously from the high quality and selfless cooperation of researchers at Cornell, in the elementary particle group and in materials research; for my research in the 1960's I was especially indebted to Michael Fisher and Ben Widom.

One other hobby of mine has been playing the oboe but I have not kept this up after 1969.

The home base for my research has been elementary particle theory, and I have made several contributions to this subject: a short distance expansion for operator products presented in an unpublished preprint in 1964 and a published paper in 1969; a discussion of how the renormalization group might apply to strong interactions, in which I discussed all possibilities except the one (asymptotic freedom) now believed to be correct; the formulation of the gauge theory in 1974 (discovered independently by Polyakov), and the discovery that the strong coupling limit of the lattice theory exhibits quark confinement. I am currently interested in trying to solve Quantum Chromodynamics (the theory of quarks) using a combination of renormalization group ideas and computer simulation.

I am also interested in trying to unlock the potential of the renormalization group approach in other areas of classical and modern physics. I have continued to work on statistical mechanics (specifically, the Monte Carlo Renormalization Group, applied to the three dimensional Ising model) as part of this effort.

Wilson became the Director of the Center for Theory and Simulation in Science and Engineering (Cornell Theory Center) - one of five national supercomputer centers created by the National Science Foundation in 1985. In 1988, he moved to The Ohio State University's Department of Physics where he became the Hazel C. Youngberg Trustees Distinguished Professor. He is now heavily engaged in educational reform as a Co-Principal Investigator on Ohio's Project Discovery, one of the National Science Foundation's Statewide Systemic Initiatives.

Kenneth G. Wilson [Wikipedia]
Posted by Mercury at 9:31 AM