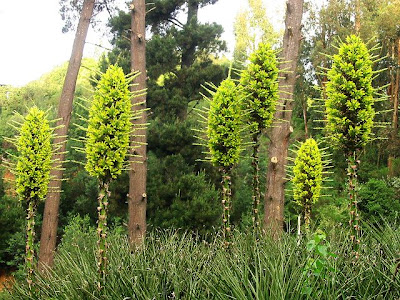 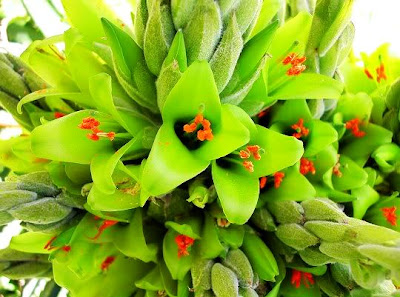 There's nothing like a giant carnivorous plant headline to get your heart racing – and to draw folks to the Royal Horticultural Society's Garden Wisley.

So, let's start by being completely accurate here. The Puya chilensis is not actually a sheep eater - or even a meat eater. Yes, it's been known to kill sheep. But it's no Venus fly trap or pitcher plant. Those are true carnivores, and really only eat insects.

What makes the Puya chilensis so fascinating is that it has been known to capture and kill sheep in Chile, its native environment, for fertilizer.

"Most bromeliads have firm, hard leaves, but Puya chilensis is sort of an extreme example. Its leaves look sort of like aloe leaves, but in between them are huge, sharp spines that jut out past them. Most plants that have spines, like cacti, use them for protection, but it's theorized that Puya chilensis actually uses them for hunting," according to PopSci.com.

If a sheep gets close enough, the spines can snag on the wool of the sheep, entrapping them. The sheep starve and die at the base of the plant, thus providing a rather grizzly but effective fertilizer.

Folks at the Royal Horticultural Society make it clear that no sheep have been harmed in the past 15 years of nurturing their Puya chilensis. And now, the three-meter (10- foot) tall plant is finally ready to bloom.

“I’m really pleased that we’ve finally coaxed our Puya chilensis into flower. We keep it well fed with liquid fertiliser as feeding it on its natural diet might prove a bit problematic. It’s well worth a visit but parents coming along with small children don’t need to worry about the plant devouring their little ones. It’s growing in the arid section of our Glasshouse with its deadly spines well out of reach of both children and sheep alike," said Cara Smith, who looks after the plant at RHS Garden Wisley, in a statment

This is not the first Puya chilensis brought to bloom in England. The society has done it in years past and it's always a crowd (and media) pleaser.

In fact, the Society's website lists 11 nurseries around the United Kingdom where local gardeners can buy the South American plant and attempt to create their own backyard botanical snare for small animals wandering by.