B. Nye on the move 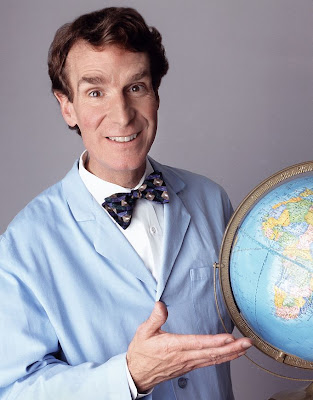 "Firebrand for Science, and Big Man on Campus"

As the car pulled into the parking lot of a Starbucks, William Sanford Nye unknotted his trademark bow tie and slipped it off.

“This might buy us a couple of minutes,” he said.

Roughly two minutes later, before his drink was ready, he was recognized anyway. Two awed young women approached to ask if he was really Bill Nye the Science Guy. Like more than a dozen other college students who would approach him over the next several hours, they asked if they could take a picture with him. He smiled, took a proffered iPhone, scooched the students in and, in a practiced gesture, stretched out his arm to take a shot of the three of them that you just knew was totally going on Facebook.

Mr. Nye had come to talk to them, and a few thousand of their friends, at Iowa State University. If he were a politician, college students would be his base. Instead, he is something more: a figure from their early days in front of the family TV, a beloved teacher and, more and more these days, a warrior for science. They, in turn, are his fans, his students and his army.

They have gone from watching him explain magnetism and electricity to defending the scientific evidence for climate change, the age of the earth and other issues they have seen polemicized for religious, political and even economic reasons.

He takes on those who would demand that the public schools teach alternative theories of evolution and the origins of the earth — most famously, in a video clip from the site BigThink.com that has been viewed some five million times. In it, he flatly tells adult viewers that “if you want to deny evolution and live in your world — in your world that’s completely inconsistent with everything we observe in the universe — that’s fine. But don’t make your kids do it, because we need them. We need scientifically literate voters and taxpayers for the future.”

In any given week, you’re likely to see Mr. Nye, 57, somewhere on television, calmly countering the arguments made by people like Marc Morano, the former Republican Senate staff member whose industry-funded organization, climatedepot.com, disputes the increasingly well-understood connection between rising levels of atmospheric carbon dioxide and warming. In an exchange several months ago on “Piers Morgan Tonight” on CNN, Mr. Morano denied that warming is occurring, and scoffed that Mr. Nye’s arguments were “the level of your daily horoscope.”
Mr. Nye quietly rebutted his opponent with the gravity of scientific consensus. “This will be the hottest two decades in recorded history,” he said. “I’ve got to disagree with you.”

Sometimes his advocacy can step out in front of scientific consensus, however. In May, after a monster tornado devastated large parts of Moore, Okla., he took a jab on Twitter at one of that state’s United States senators, James Inhofe, who has written a book calling climate change “the greatest hoax.” He mused: “Has anyone asked Oklahoma Senator Inhofe” about the frequency of such destructive storms? Yet a link between climate change and tornado activity has not been established.

On the night the tornado hit Moore, Mr. Nye explained to Mr. Morgan that “you can’t say from any one storm that ‘this is a result of, let’s say, climate change.’ ” But he noted that “if there’s more heat driving the storm, then there’s going to be more tornadoes,” and added that the question “is worth investigating.”

Neil deGrasse Tyson, the director of the Hayden Planetarium at the American Museum of Natural History, said that he considered Mr. Nye “among my best friends” and complimented him for “hitting controversial topics head on.”
But, he said, his own style is a bit less confrontational: “I’m looking to stimulate curiosity so most people can go out there and learn on their own.”

Phil Plait, the creator of the Bad Astronomy blog at Slate.com and a fierce advocate himself, is more like Mr. Nye, willing to take the gloves off in rebutting those who might deny that men landed on the moon, or the evidence for human effects on climate change.

Mr. Plait said admiringly of Mr. Nye, “He will very calmly tear them apart,” adding, “His big advantage is, he’s right. We know that climate change is real. We know creationism is wrong. These are no longer scientific controversies.”

“When people call these ‘controversial topics,’ that’s misleading,” he continued. “They are only controversial politically. And politics is not necessarily evidence-based.”

There was nothing in Mr. Nye’s early days that suggested he might be a firebrand for science. Born in Washington, D.C., he studied mechanical engineering at Cornell, where he got to know a professor named Carl Sagan. He moved out West to do engineering for Boeing, where he spent some three years designing a hydraulic tube for the 747 that served to dampen vibration in the steering mechanism. He refers to it lovingly as “my tube.”

He tried his hand at stand-up comedy — his first time onstage was during a Steve Martin look-alike competition, which he won. He would achieve escape velocity from Boeing with an idea for a television program that would teach science to children in a wacky way. The best-known version of “Bill Nye the Science Guy” ran from 1992 to 1996, and won 18 Emmys in five years.

Mr. Nye’s past teaching and present crusading have made him a rock star for scientifically inclined students across the country. That celebrity has allowed him, as executive director of the Planetary Society, to push for the kind of interplanetary exploration that, he said in an interview, “leads to the reverence that we have for our place in the cosmos.”

On the day of Mr. Nye’s visit to the Iowa State campus, students began lining up by midafternoon to make sure they got into the evening lecture. Stephens Auditorium holds about 3,000 people, and as many as a thousand would ultimately be turned away.

They came, many said, because “Bill Nye the Science Guy” helped shape their lives. “He was probably the one who inspired me to keep going in the science career track,” said Betsy Salmon, the first person in line at one entrance to the auditorium. She majored in animal ecology.

Kaci McCleary, an “aspiring neurobiologist, or neuro-something,” said that Mr. Nye was “a very inspiring person in the field of science — he tells people to make science part of their lives, even if it’s not their career.” Ms. McCleary, who knitted as she waited to be let in, said a friend had joked to her, “I hope to be able to touch the hem of his lab coat, so he could cure me of my stupid.”

Mr. Nye did not disappoint. In a lecture that gave evidence of his stand-up roots, he started out with rambling asides on his his family and its generations-long fascination with sundials. He talked about the bluish tinge of shadows on Earth compared with the orangy shadows on Mars, and described the sundial that he convinced NASA to send up with the Curiosity rover. He got a little risqué with a joke about the gnomon — the part of the sundial that sticks up, you know — and bounced into a discussion of the hellish heat of Venus and that planet’s high concentration of greenhouse gases.

He told the students that if they figured out ways to solve problems like greenhouse gases and global warming, “You could — dare I say it? — change the world!” And what’s more, he added, throwing his head back for a hearty mad-scientist laugh, “you could get rich!”

Over the hour-and-a-half talk, those statements started out as a laugh line that got funnier through increasingly manic repetition. But he shifted his tone gradually, from goofy to fervent. By the end of his speech, it was an exhortation, a command: Change the world.

During the question-and-answer session, a student brought up Mr. Nye’s comments on evolution and creation. The problem, he explained, is that some people advocate requiring public schools to teach religious apologia as science.

The students roared their approval. As the audience streamed out — did those dudes really rip off their shirts to show that they had painted, in all capital letters, “Bill Nye” on their chests and “science” on their backs? — Mr. Nye looked like someone who had just run a triathlon. And then it was time for more pictures.

Earlier in the day, he had marveled at the chain of events that made him the Springsteen of the nerds. “I was making a TV show. It had commercials for toys.” Yet, he noted, “It stands the test of time. It’s very gratifying.”
What he did then, and what he does now, are all part of the same crusade, he said. “There’s nothing I believe in more strongly than getting young people interested in science and engineering,” he said — “for a better tomorrow, for all humankind.”

He stopped, realizing that sounded grandiose, or at least corny.