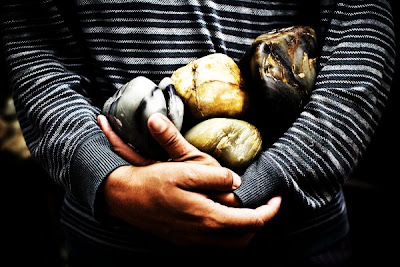 A jewelry store is an archive of the Earth. Every gem fixed to every ring or necklace was forged deep inside our planet, according to its own recipe of elements, temperature and pressure.

But it has taken a while for geologists to decode the cookbook for gems. Jade, for example, puzzled geologists for decades. “For a long time people looked at this crazy rock, and it didn’t make any sense,” said George Harlow, a geologist at the American Museum of Natural History. But thanks to the research of Dr. Harlow and other geologists, jade now has a back story: It formed in dying oceans.

The discovery of gems like rubies and jade thus signifies more than just a new supply of bling in jewelry stores. It tells geologists some important things about the planet.

If rocks contain jade, the scientists can be fairly sure those rocks are a vestige of an ocean buried underground. Rubies, on the other hand, appear in places where mountains formed from continental collisions, even if those mountains were eroded away millions of years ago.

Gems may thus preserve precious clues to some of the most profound questions about the life of our planet.

The Earth is covered with tectonic plates. In some places, like off the coast of the northwestern United States, ocean plates are getting pushed underneath continental ones. As the plates sink, they are squeezed to titanic pressures. They also get cooked. Under these extreme conditions, their atoms are combined into new molecular arrangements that would never emerge anywhere else on Earth. Hot jets of mineral-rich fluid rise from the plates, pushing up into the overlying rock. Among the things that emerge from that fluid is a mixture of sodium, aluminum, silicon and oxygen known as jadeite — a form of jade.

In the current issue of the journal Earth and Planetary Science Letters, Dr. Harlow and his colleagues report new findings that support this chain of events. At the bottom of the Caribbean Sea, they found jade-bearing deposits that are 30 million years older than the surrounding rock. That’s what you would expect if jade-producing fluid rose up from sinking oceanic crust long before other material from a sinking ocean plate.

In the journal Geology, Dr. Harlow — writing with Robert J. Stern of the University of Texas at Dallas, Tatsuki Tsujimori of Okayama University in Japan and Lee A. Groat of the University of British Columbia — explores some stories that gems like jade can tell. Each is different. While jade is produced from dying oceans, for example, rubies are forged in newborn mountains.

Some mountain ranges, like the Himalayas, were formed when two continental plates collided. Fifty million years ago, the Indian subcontinent was an isolated island. In a slow-motion crash, it plowed into Asia. The force of the impact crumpled rocks for hundreds of miles inland, producing mountains.

As mountains rose overhead, the Indian plate slid underneath Asia. Once again, the rock was squeezed and heated. Continents are ringed by rocks like shale, formed from sediments washing off of land. When crushed in this subterranean forge, shale can produce crystals of aluminum and oxygen.

If these crystals stop developing, they become sapphires. But the crystals may instead get pushed up toward the surface of the Earth. The overlying rock they move into is rich in chromium. The chromium atoms push the aluminum atoms out of the crystals and take their place, giving them a red color. “When they get a little chromium in them, we call them rubies,” Dr. Stern said.

The oldest deposits of jade and rubies date to only about 600 million years ago. The Earth itself is more than 4.5 billion years old, which naturally raises the question of why there aren’t any jade stones or rubies from the first nearly four billion years of the planet’s existence.

Dr. Stern, for one, thinks the answer is that plate tectonics — the stirring of the planet’s interior that drives plates around its surface — didn’t exist for most of Earth’s history. “I would say it started less than a billion years ago,” he said.

That’s a controversial idea in the geological community. Perhaps gems may someday resolve it.
Posted by Mercury at 3:34 PM