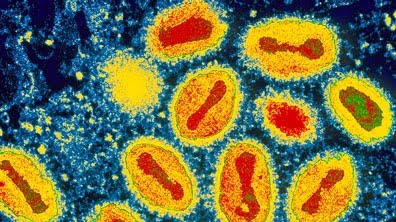 "Should We Destroy the Last of the World's Smallpox Virus?"

Time
Global health officials at the World Health Conference in Geneva will decide this week whether to preserve or destroy the last known stockpiles of smallpox — one of the deadliest diseases in human history.

More than 30 years ago, a worldwide vaccination campaign led to the eradication of the variola virus, which causes smallpox, but not every trace of the virus is gone: the last remaining stocks are confined in two research laboratories — one at the Centers for Disease Control and Prevention in Atlanta and the other in a remote town in Russia.

The U.S. has asked that the World Health Organization — which will make the final decision — delay destruction of these stores for another five years. The U.S. argues that scientists need the samples to continue working on safer vaccines and antiviral treatments, in order to protect people in case of outbreak or in the event that smallpox is used as a biological weapon.

"We fully agree that these samples should — and eventually will — be destroyed," Secretary of Health and Human Services Kathleen Sebelius wrote in a recent op-ed in the International Herald Tribune. "However, we also recognize that the timing of this destruction will determine whether we continue to live with the risk of the disease re-emerging through deliberate misuse of the virus by others."

The WHO's 193 member states have long been at odds over whether or not to preserve the samples. Member countries first decided in 1996 that they should be destroyed, but that has been repeatedly delayed to allow scientists more research time; there are currently two vaccines against smallpox, and a new one coming along, but so far, no cure. Countries that wish to destroy the samples say doing so would be the safest move, reducing the risk of accidental release. Other experts note that the live virus is not necessary to test vaccines or drugs.

As Gareth Williams, whose book Angel of Death traces the history of smallpox, told BBC News:

"There is no point in keeping it really. It has been sequenced completely so it can be recreated in a test tube and if it comes back you've got as much virus as you could want. It's just a vague sense of political unease keeping stocks, it has nothing to do with the scientific argument."
Smallpox, which killed people for thousands of years, was fatal in 30% of cases, according to WHO. Symptoms included fever, pain, rash, malaise and the characteristic lesions. Those who did survive the disease sometimes faced severe complications, such as blindness.

"Today, most of the world's population has no immunity to the disease," Sebelius said.

The issue is expected to be debated by Wednesday or Thursday of the World Health Conference.
Posted by Mercury at 9:19 AM