Physics and the soul...just different epistemology 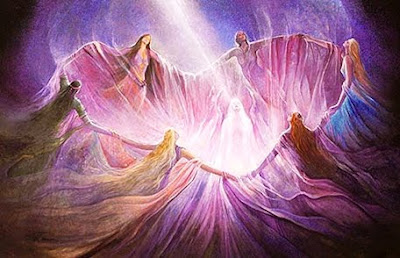 You may believe what you want to believe. This material corresponds to a previous post [ Human knowledge limitations ]. Some things about the universe may never be known.

"Physics and the Immortality of the Soul"

Scientific American
The topic of "life after death" raises disreputable connotations of past-life regression and haunted houses, but there are a large number of people in the world who believe in some form of persistence of the individual soul after life ends. Clearly this is an important question, one of the most important ones we can possibly think of in terms of relevance to human life. If science has something to say about, we should all be interested in hearing.

Adam Frank thinks that science has nothing to say about it. He advocates being "firmly agnostic" on the question. (His coblogger Alva Noë resolutely disagrees.) I have an enormous respect for Adam; he's a smart guy and a careful thinker. When we disagree it's with the kind of respectful dialogue that should be a model for disagreeing with non-crazy people. But here he couldn't be more wrong.

Adam claims that there "simply is no controlled, experimental[ly] verifiable information" regarding life after death. By these standards, there is no controlled, experimentally verifiable information regarding whether the Moon is made of green cheese. Sure, we can take spectra of light reflecting from the Moon, and even send astronauts up there and bring samples back for analysis. But that's only scratching the surface, as it were. What if the Moon is almost all green cheese, but is covered with a layer of dust a few meters thick? Can you really say that you know this isn't true? Until you have actually examined every single cubic centimeter of the Moon's interior, you don't really have experimentally verifiable information, do you? So maybe agnosticism on the green-cheese issue is warranted. (Come up with all the information we actually do have about the Moon; I promise you I can fit it into the green-cheese hypothesis.)

Obviously this is completely crazy. Our conviction that green cheese makes up a negligible fraction of the Moon's interior comes not from direct observation, but from the gross incompatibility of that idea with other things we think we know. Given what we do understand about rocks and planets and dairy products and the Solar System, it's absurd to imagine that the Moon is made of green cheese. We know better.

We also know better for life after death, although people are much more reluctant to admit it. Admittedly, "direct" evidence one way or the other is hard to come by -- all we have are a few legends and sketchy claims from unreliable witnesses with near-death experiences, plus a bucketload of wishful thinking. But surely it's okay to take account of indirect evidence -- namely, compatibility of the idea that some form of our individual soul survives death with other things we know about how the world works.

Claims that some form of consciousness persists after our bodies die and decay into their constituent atoms face one huge, insuperable obstacle: the laws of physics underlying everyday life are completely understood, and there's no way within those laws to allow for the information stored in our brains to persist after we die. If you claim that some form of soul persists beyond death, what particles is that soul made of? What forces are holding it together? How does it interact with ordinary matter?

Among advocates for life after death, nobody even tries to sit down and do the hard work of explaining how the basic physics of atoms and electrons would have to be altered in order for this to be true. If we tried, the fundamental absurdity of the task would quickly become evident.

Even if you don't believe that human beings are "simply" collections of atoms evolving and interacting according to rules laid down in the Standard Model of particle physics, most people would grudgingly admit that atoms are part of who we are. If it's really nothing but atoms and the known forces, there is clearly no way for the soul to survive death. Believing in life after death, to put it mildly, requires physics beyond the Standard Model. Most importantly, we need some way for that "new physics" to interact with the atoms that we do have.

Very roughly speaking, when most people think about an immaterial soul that persists after death, they have in mind some sort of blob of spirit energy that takes up residence near our brain, and drives around our body like a soccer mom driving an SUV. The questions are these: what form does that spirit energy take, and how does it interact with our ordinary atoms? Not only is new physics required, but dramatically new physics. Within QFT, there can't be a new collection of "spirit particles" and "spirit forces" that interact with our regular atoms, because we would have detected them in existing experiments. Ockham's razor is not on your side here, since you have to posit a completely new realm of reality obeying very different rules than the ones we know.

But let's say you do that. How is the spirit energy supposed to interact with us? Here is the equation that tells us how electrons behave in the everyday world:

Don't worry about the details; it's the fact that the equation exists that matters, not its particular form. It's the Dirac equation -- the two terms on the left are roughly the velocity of the electron and its inertia -- coupled to electromagnetism and gravity, the two terms on the right.

As far as every experiment ever done is concerned, this equation is the correct description of how electrons behave at everyday energies. It's not a complete description; we haven't included the weak nuclear force, or couplings to hypothetical particles like the Higgs boson. But that's okay, since those are only important at high energies and/or short distances, very far from the regime of relevance to the human brain.

If you believe in an immaterial soul that interacts with our bodies, you need to believe that this equation is not right, even at everyday energies. There needs to be a new term (at minimum) on the right, representing how the soul interacts with electrons. (If that term doesn't exist, electrons will just go on their way as if there weren't any soul at all, and then what's the point?) So any respectable scientist who took this idea seriously would be asking -- what form does that interaction take? Is it local in spacetime? Does the soul respect gauge invariance and Lorentz invariance? Does the soul have a Hamiltonian? Do the interactions preserve unitarity and conservation of information?

Nobody ever asks these questions out loud, possibly because of how silly they sound. Once you start asking them, the choice you are faced with becomes clear: either overthrow everything we think we have learned about modern physics, or distrust the stew of religious accounts/unreliable testimony/wishful thinking that makes people believe in the possibility of life after death. It's not a difficult decision, as scientific theory-choice goes.

We don't choose theories in a vacuum. We are allowed -- indeed, required -- to ask how claims about how the world works fit in with other things we know about how the world works. I've been talking here like a particle physicist, but there's an analogous line of reasoning that would come from evolutionary biology. Presumably amino acids and proteins don't have souls that persist after death. What about viruses or bacteria? Where upon the chain of evolution from our monocellular ancestors to today did organisms stop being described purely as atoms interacting through gravity and electromagnetism, and develop an immaterial immortal soul?

There's no reason to be agnostic about ideas that are dramatically incompatible with everything we know about modern science. Once we get over any reluctance to face reality on this issue, we can get down to the much more interesting questions of how human beings and consciousness really work.

[Sean Carroll is a physicist and author. He received his Ph.D. from Harvard in 1993, and is now on the faculty at the California Institute of Technology, where his research focuses on fundamental physics and cosmology. Carroll is the author of From Eternity to Here: The Quest for the Ultimate Theory of Time, and Spacetime and Geometry: An Introduction to General Relativity. He has written for Discover, Scientific American, New Scientist, and other publications. His blog Cosmic Variance is hosted by Discover magazine, and he has been featured on television shows such as The Colbert Report, National Geographic's Known Universe, and Through the Wormhole with Morgan Freeman.]
Posted by Mercury at 5:35 PM