Mythmaking in the cinema 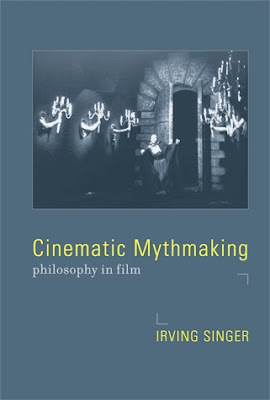 Cinematic Mythmaking: Philosophy in Film
by

Many films are deeper than 3D and action/adventure.
Review by Ben Mulvey

metapsychology
Irving Singer is a serious philosopher and a prolific writer. A number of his many books and articles involve one or both of two topics, love and film, topics generally shunned by contemporary philosophers. But philosophers, or anyone else for that matter, who overlook Singer's work are doing themselves a great disservice. His books, and Cinematic Mythmaking is no different, traverse the entire collection of cultural artifacts of the Western world (myths, fables, plays, novels, operas, musical compositions, paintings, films) with such ease, it's as if he were gliding through the Alexandrian library on roller blades pointing out interesting pieces of the collection to a group of perspiring, flat-footed tourists trying to keep up with him. The expanse of material that succumbs to Singer's erudition is breathtaking.

The 245-page book consists of five chapters of similar length, with an introduction, endnotes, and index. The books substantive chapters are a series of stand-alone essays, each one focusing on a particular film, filmmaker, or comparison of filmmakers, or group of films. The five chapter titles might offer a good overall view of what the book covers. They are, "The Lady Eve," "Pygmalion Variations," "The Heiress and Washington Square," "Cocteau: The Mythological Poetry of Film," and "Mythmaking in Kubrick and Fellini." There is no stand-alone conclusion to the book. What the chapters have in common is the exploration of philosophical questions, mythmaking, and filmmaking.

The interesting and helpful introduction to Cinematic Mythmaking, "Philosophical Dimensions of Myth and Cinema" both holds the following chapters together and anticipates the obvious questions that come to mind when confronted with a work about philosophy, myth, and film. Can films carry anything more than trivial philosophical content? Is the fact that films traditionally contain mythological themes anything more than an obvious and uninteresting observation? As carriers of mythological themes are films significantly different from other art forms that do the same? Cinematic Mythmaking provides an affirmative answer to each of these questions.

The book's introductory chapter, "Philosophical Dimensions of Myth and Cinema," provides the outline of answers to those questions. The rest of the book offers the substance. The introduction holds the book's other chapters together and provides important definitional work. Singer's interest in Cinematic Mythmaking is "in myths as components in the meaningfulness conveyed through cinematic techniques and therefore pertinent to the philosophic import that films of merit may achieve" (3).

In chapter 1, "The Lady Eve" Singer shows that this comedy sheds the cosmological trappings of the myth that appears in the Book of Genesis and focuses instead on good and evil as they play out in the progress of a hero (the Adam character played by Henry Fonda) and a heroine (the Eve character played by Barbara Stanwyck). Singer applauds how the director and writer of this film, Preston Sturges, offers the viewer a more complex and realistic portrait of a woman than is often presented in traditional myths. The Hebrew myths of Eve showed her to be at first totally innocent, then totally bad. The Christian myths give us Mary Magdalene, the spoiled woman in contrast to Mary, the pure mother of Christ. Sturges gives us Jean/Eve who shows us that women are not good or bad, but are both at once. The interesting theme of this chapter lies not so much in Singer's demonstration that this film contains mythological themes as much as it lies in a demonstration of Sturges's ability to produce the film's mythologic a content through the structure of the film itself. This is the real achievement of Cinematic Mythmaking in general.

Chapter 2, "Pygmalian Variations," covers similar these as the first chapter in that the Pygmalian myth centers on the attempt of a woman to remake herself, to become a new woman. But again the interesting part of this chapter is Singer's examination of certain film techniques help to explain "the mythmaking capacity that is native to the art form" (63). In fact, claims Singer, cinematic techniques are "inherently mythical" (65, emphasis in original). Film can induce a suspension of disbelief by overcoming the normal temporal sequence of events, for example. The film, Pygmalion, compresses months into minutes and allows us to better understand human feelings. Chapter 3, The Heiress and Washington Square examines two film versions of the novel by Henry James, which is best understood, claims Singer, "in its relation to major myths of love that have developed over centuries in Western culture" (84), such as the Don Juan myth. In these films we have another example of the major character being a woman. To this point Singer says The Heiress "contributes to the phase of the women's liberation movement that existed at the time" (125).

Chapter 4, "Cocteau: The Mythological Poetry of Film" is primarily a study of Cocteau's La Belle et la Bete. But it uses Disney's Beauty and the Beast for some interesting contrasts. The most fascinating part of this chapter is that Singer inserts another layer of complexity in the relationship between film, myth, and philosophy by showing that Cocteau approached film as a form of poetry. Singer explains that "Cocteau creates images that are visual equivalents to the figurative devices that distinguish written poetry from prose (139). In chapter 5, "Mythmaking in Kubrick and Fellini" Singer shows that both Kubrick and Fellini, although not rising to the level of film as poetry as does Cocteau, they nevertheless are alike in that rely on what he calls an "aesthetic inventiveness in human nature" (207). Kubrick's 2001: A Space Odyssey and Eyes Wide Shut are explored as well as Fellini's 8½ along with a number of other of his films.

Cinematic Mythmaking is intended for a general reading audience. It presupposes no specialized philosophical knowledge or training. But it is rather unforgiving of those who don't have some acquaintance with the cultural productions of the west since ancient Greece. In many respects this is a book about women. Perhaps this is the case because so many well-known myths are about women. The only major film discussed by Singer lacking a major female character is Kubrick's 2001. Singer himself points this out as a feature of Kubrick's films. Perhaps what we can learn from Cinematic Mythmaking is that a number of films about women that contain traditional mythological themes, reveal both how far we have come as well as how far yet we still have to go.

[Ben Mulvey, Ph.D., is Associate Professor of Philosophy at the College of Arts and Sciences of Nova Southeastern University. He received his doctorate in philosophy from Michigan State University specializing in political theory and applied ethics. He teaches philosophy at NSU and is a member of the board of advisors of the Florida Bioethics Network.]
Posted by Mercury at 2:55 PM