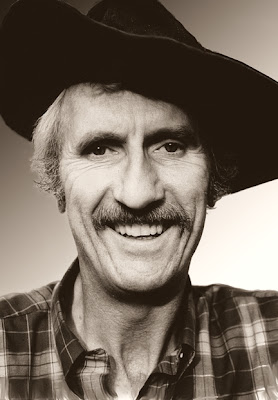 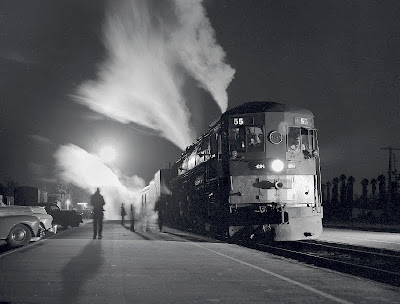 He recorded the industry's transition from steam to diesel, perched atop speeding trains to photograph their motion, and took 'some of the most beautiful night photographs of railroads ever made.'

May 22nd, 2011
Los Angeles Times
Richard Steinheimer, a master of railroad photography whose poetic images documented a half-century of trains and the landscape of the American West, has died. He was 81.

Steinheimer died May 4 at his Sacramento home of Alzheimer's disease, said his wife, Shirley Burman.

"He was certainly one of the greats," said John Gruber, founder and president of the Center for Railroad Photography and Art in Madison, Wis. "He did very unusual and creative work and inspired a lot of other photographers."

From the early 1950s until he was diagnosed with Alzheimer's in 2000, Steinheimer was regarded as a pre-eminent railroad photographer.

"He's been called the Ansel Adams of the railroad photography world," said Phil Hammond, director of the California State Railroad Museum. "He brought an artistic side to a field that is often associated with technology."

He recorded the tail end of railroad's transition from steam to diesel power and took "some of the most beautiful night photographs of railroads ever made," according to New York City's Robert Mann Gallery, which represents his work.

Sometimes, Steinheimer would position himself precariously atop locomotives so that his camera could better capture the feeling of motion.

A 1963 book of his photographs, "Backwoods Railroads of the West," eventually became one of the most collected railroad books, the gallery said.

An early Steinheimer photo that is considered his first masterpiece, "28 Degrees Below at Thistle, Utah, 1951," caught the shadow of both the steam locomotive and its smoke in the snow.

"He loved that photo," his wife said. "It was so hard to take. He was using a 4-by-5 Speed Graphic, and he was only able to get off two shots it was so cold out."

In "A Passion for Trains," a 2004 book of Steinheimer prints, railroad photographer Jeff Brouws wrote: "He had never thought of his photography as art, or considered his efforts serious; in 1955, he called himself 'just a rail-photo bum.' But don't be fooled by this casual demeanor."

After his salesman father, Virgil, went broke during the Depression, his parents divorced and 6-year-old Richard headed west on a train with his sister and mother, Frances, a secretary.

In a final farewell gesture, his father rapped on Richard's compartment window as the train departed. It was a "pivotal moment" that helped foster a love of trains, Brouws wrote.

"Saying goodbye to his father was probably the saddest day of his life, and he only saw his father once more," his wife said. "He found father figures in his many railroad friends."

The family eventually settled in Southern California and by 1939 lived near the Southern Pacific main line in Glendale. At 16, he started taking pictures of trains with a Kodak Brownie camera.

After a year as a Glendale News-Press photographer, Steinheimer served in the Navy in San Diego as a photojournalist from 1951 to 1953.

He also was a photojournalist for the Marin County Independent Journal from 1956 to 1962 and worked as an industrial photographer in the Silicon Valley.

His railroad pictures were featured in a solo exhibit in 1965 in Grand Central Terminal in New York City, and in many books and publications, especially Trains magazine.

Divorced from his first wife, Steinheimer moved to Sacramento in 1984, the same year he married Burman, a photographer he had met at the California State Railroad Museum.

The 6-foot-6 Steinheimer was known to be gentle and friendly, and made a point of including rail workers in his photographs.

"Every time we'd visit a place, he would bring prints to hand out to people he had taken pictures of," his wife said. "He was a real artist who couldn't ask for money. He gave it away." 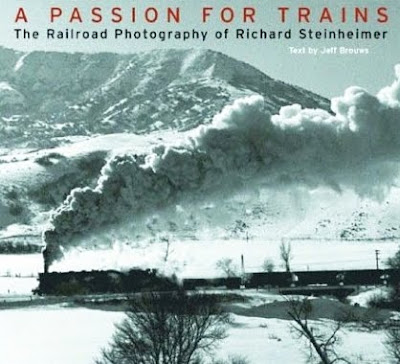 A Passion for Trains: The Railroad Photography of Richard Steinheimer 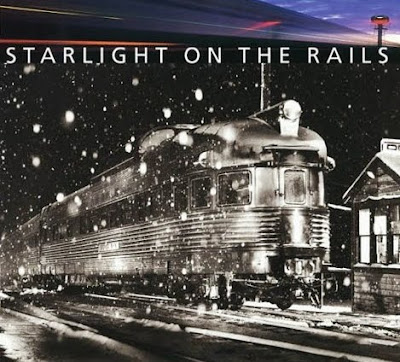 Starlight on the Rails