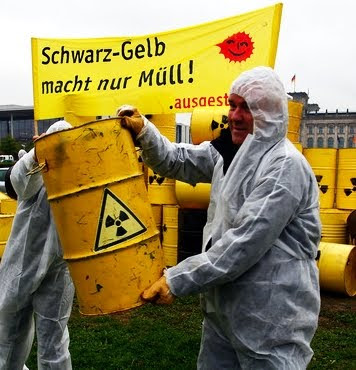 BBC NEWS
Germany's coalition government has announced a reversal of policy that will see all the country's nuclear power plants phased out by 2022.

The decision makes Germany the biggest industrial power to announce plans to give up nuclear energy.

Chancellor Angela Merkel set up a panel to review nuclear power following the crisis at Fukushima in Japan.

There have been mass anti-nuclear protests across Germany in the wake of March's Fukushima crisis, triggered by an earthquake and tsunami.

Mr Rottgen said the seven oldest reactors - which were taken offline for a safety review immediately after the Japanese crisis - would never be used again. An eighth plant - the Kruemmel facility in northern Germany, which was already offline and has been plagued by technical problems, would also be shut down for good.

Mr Rottgen said: "It's definite. The latest end for the last three nuclear power plants is 2022. There will be no clause for revision."

Mr Rottgen said a tax on spent fuel rods, expected to raise 2.3bn euros (£1.9bn) a year from this year, would remain despite the shutdown.

Mrs Merkel's centre-right Christian Democrats met their junior partners on Sunday after the ethics panel had delivered its conclusions.

Before the meeting she said: "I think we're on a good path but very, very many questions have to be considered.

"If you want to exit something, you also have to prove how the change will work and how we can enter into a durable and sustainable energy provision."

The previous German government - a coalition of the centre-left Social Democrats (SPD) and the Greens - decided to shut down Germany's nuclear power stations by 2021.

However, last September Chancellor Angela Merkel's coalition scrapped those plans - announcing it would extend the life of the country's nuclear reactors by an average of 12 years.

Ministers said they needed to keep nuclear energy as a "bridging technology" to a greener future.

The decision to extend was unpopular in Germany even before the radioactive leaks at the Fukushima plant.

Germany's nuclear industry has argued that an early shutdown would be hugely damaging to the country's industrial base.

Before March's moratorium on the older power plants, Germany relied on nuclear power for 23% of its energy.

The anti-nuclear drive boosted Germany's Green party, which took control of the Christian Democrat stronghold of Baden-Wuerttemberg, in late March.

"The various studies from the Intergovernmental Panel on Climate Change show that renewables could deliver, basically, global electricity by 2050," he said.

"Germany is going to be ahead of the game on that and it is going to make a lot of money, so the message to Germany's industrial competitors is that you can base your energy policy not on nuclear, not on coal, but on renewables."

Shares in German nuclear utilities RWE and E.On fell on the news, though it had been widely expected.

But it was good news for manufacturers of renewable energy infrustructure.

"Germany to abandon nuclear power by 2022"

USA TODAY
Germany's coalition government agreed early Monday to shut down all the country's nuclear power plants by 2022, the environment minister said, making it the first major industrialized power to go nuclear-free since the Japanese disaster.

Roettgen praised the coalition agreement after negotiations through the night between the governing parties.

"This is coherent. It is clear," he told reporters in Berlin. "That's why it is a good result."

Chancellor Angela Merkel pushed through measures in 2010 to extend the lifespan of the country's 17 reactors, with the last one scheduled to go offline in 2036, but she reversed her policy in the wake of the Japanese disaster.

Through March — before the seven reactors were taken offline — just under a quarter of Germany's electricity was produced by nuclear power, about the same share as in the U.S.

Energy from wind, solar and hydroelectric power currently produces about 17 percent of the country's electricity, but the government aims to boost its share to around 50 percent in the coming decades.

Many Germans have been vehemently opposed to nuclear power since Chernobyl sent radioactive fallout over the country. Tens of thousands repeatedly took to the street in the wake of Fukushima to urge the government to shut all reactors.

A center-left government a decade ago first penned a plan to abandon the technology for good because of its inherent risks by 2021. But Merkel's government last year amended it to extend the plants' lifetime by an average of 12 years.

But the conservative chancellor reversed her pro-nuclear stance after the earthquake and tsunami that crippled the Fukushima Dai-ichi plant on March 11, triggering nuclear meltdowns.

Merkel's government ordered the country's seven oldest reactors, built before 1980, shut down four days after the Fukushima incident. The plants, which will now remain offline, accounted for about 40 percent of the country's nuclear power capacity.

Germany used to be a net energy exporter, and the agency overseeing its electricity grid said Friday that the country remains self-sufficient even without the seven reactors and another plant that has already been offline for more than a year for maintenance work.

The coalition government's decision broadly follows the conclusions of a government-mandated commission on the ethics of nuclear power, which delivered its recommendation to abolish the technology by 2022 on Saturday. Details of the final report are to be presented later Monday.

Shutting down even more reactors, however, will require billions of investment in renewable energies, more natural gas power plants and an overhaul of the country's electricity grid.

The government of neighboring Switzerland, where nuclear power produces 40 percent of the country's electricity, also announced last week that it plans to shut down its reactors gradually once they reach their average lifespan of 50 years — which would mean taking the last plant off the grid in 2034.

For the wind passeth over it, and it is gone; and the place thereof shall know it no more.