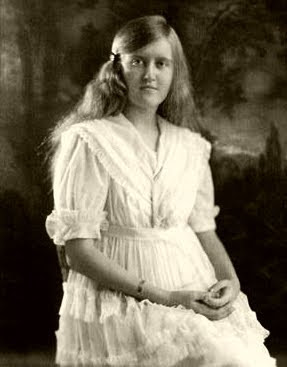 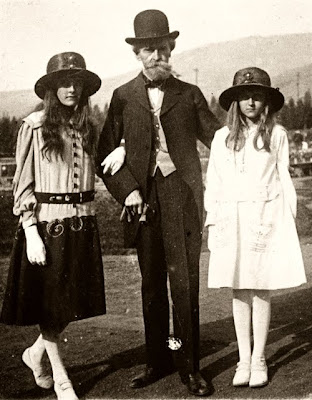 This is a photo from 1917 of mister Clark and his daughters Andrée and Huguette visiting Columbia Gardens, which he built in Butte. Huguette is on the right.
You have to wonder about Huguette Clark's life: She had so much and so little.

guardian.co.uk
For 80 years her life was set in aspic, preserved as if in a time warp in an ever-shrinking social world that ended with her death this week aged 104 in a hospital room accompanied only by the nurses caring for her and her beloved French dolls.

But Huguette Clark leaves behind her a fortune estimated as at least $500m (£307m) and a story of eccentricity and loss anchored in another age.

For the past 22 years or more, she has lived under a false name in a hospital room, most recently in the Beth Israel Medical Centre, New York, where she died on Tuesday, with no one other than her lawyer allowed to visit her. The last known photograph of her shows her standing on a steamship swaddled in furs; it was taken in 1930.

As MSNBC's investigative reporter Bill Dedman, who has written the definitive work on Clark and last year tracked her down to a bustling corridor in the hospital, has put it: "She wasn't sick. She was reclusive. She made Howard Hughes seem outgoing."

By choosing to closet herself away at Beth Israel, Clark deprived herself of fabulous riches. Her inheritance included Bellosguardo, a mansion worth $100m overlooking the Pacific in Santa Barbara, California, which she last visited 50 years ago, as well as the $24m Le Beau Chateau, tucked among 21 hectares (52 acres) of land in Connecticut, which she bought in 1952 and expanded with an artist's loft but never occupied.

Above all, there was the Fifth Avenue apartment, distinguished by being the largest at that illustrious Manhattan address, with 42 rooms over one and a half floors of an entire block. She was last spotted there at least 22 years ago.

If Clark sounds a little irregular, then consider the source of her wondrous wealth – her father, William Clark. He was a copper tycoon from Montana, second in riches only to the oil magnate John Rockefeller.

Notorious for his curmudgeonly ways and temper, Clark is still remembered in Montana as the man who stripped the state of its natural wealth. He was seminal in the founding of Las Vegas, which he established as a maintenance base for one of his railway lines. He also has the dubious distinction of having inspired the 17th amendment to the American constitution which provides for direct elections for US senators – it was introduced after he tried to buy a seat.

Clark built a house on Fifth Avenue a few blocks from where Huguette eventually moved. It had 121 rooms and four art galleries, with electricity powered by a daily load of seven tons of coal brought to the house via his own subway line.

Huguette was brought up in that house and in Paris, where she had been born on 9 June 1906. She is said to have spoken English with a French accent to the day she died. She spent much of her time, both as a child and adult, with her prized collection of dolls, playing music – she owned four Stradivari including The Virgin, one of the most sought-after violins, made in 1709, given by her mother for her 50th birthday and later sold for $6m – and watching the Flintstones and other TV cartoons.

Why she became a recluse is not known. It could have been the bereavement of losing her elder sister, Andrée, who died in 1919 of meningitis, or of her mother in 1963, or it could have been related to divorcing her husband, William Gower, after just two years' marriage in 1930. Perhaps it was a reaction to her huge wealth. She once called money "a menace to happiness".

It is unclear what will happen to her fortune; it is being investigated by the Manhattan district attorney.

She had no children and had not seen any relatives for decades. Her only visitors were her lawyer, Wallace Bock, and accountant, Irving Kamsler, each the subject of the attorney's attention after Clark's relatives complained a couple of years ago that her affairs were being mismanaged. Both men deny any wrongdoing.

Huguette Clark, a copper tycoon's daughter, preferred to be known as Madame Clark and to be surrounded by her expensive French dolls. Relatives accuse her lawyer and accountant of mishandling her massive estate.

Los Angeles Times
Huguette Clark, a copper tycoon's daughter with a taste for exquisite French dolls, baronial homes and solitude, has died. She was 104.

Clark, who preferred to be known as Madame Clark, died Tuesday at Beth Israel Hospital in New York City. She had resided at the hospital for more than 20 years, leaving vacant but meticulously tended her grand homes in Santa Barbara, New Canaan, Conn., and New York City.

Increasingly reclusive as she grew older, she would summon an antiques dealer to her palatial Fifth Avenue apartment and bargain with him only through a closed door. As her long life drew to an end, her cherished dolls are reported to have been her constant companions.

Her New York attorney, Wallace Bock, is one of the few people with whom she is known to have had regular contact. However, New York prosecutors are investigating whether he and accountant Irving H. Kamsler exploited the frail Clark, whose estate is valued at $500 million.

Bock's spokesman issued a brief comment on her death: "Madame Clark's passing is a sad event for everyone who loved and respected her over the years. She died as she wanted, with dignity and privacy. We intend to continue to respect her wishes for privacy."

Born into opulence in Paris on June 9, 1906, Huguette Marcelle Clark was the daughter of William Andrews Clark, a mine owner and railroad baron whose fortune rivaled John D. Rockefeller's. Huguette's mother, Anna LaChappelle, was 17 and portraying Lady Liberty in a Fourth of July pageant when the 56-year-old Clark, later a U.S. senator from Montana, saw her and was smitten.

Clark's father — who built a whistle-stop called Las Vegas in what is now Clark County, Nev. — was unashamed to display his wealth. Huguette grew up in a 121-room Manhattan mansion so over-the-top that New Yorkers called it "Clark's Folly." It included Turkish baths, galleries for an extensive art collection and a railroad spur for coal cars.

Huguette Clark was educated at Miss Spence's School for Girls in New York and took extended vacations in France.

When she was a teenager, her father acquired a Santa Barbara estate called Bellosguardo, an elegant home perched on a bluff overlooking the ocean. A private rail car would deposit the family at Bellosguardo every winter and Huguette would return there over the years. By all accounts, she had not set foot on her 23-acre property for at least half a century before her death.

Barbara Hoelscher Doran, the manager of a Montecito interior design business, grew up at Bellosguardo, where her father supervised the staff. When invited from her family's cottage to the estate's main house, she would don surgical-style slippers to avoid marring the parquet floors. As a young girl she was fond of Huguette, who would ask her to tea and give her children's books in French.

"She was a wonderful, kind, giving lady," Doran said. "I feel really saddened that it's the end of an era."

While William Andrews Clark was open to a fault, bragging that as a politician he "never bought a man who wasn't for sale," Huguette shunned the spotlight. In Santa Barbara, she was little known. She donated land and money for a 42-acre bird refuge near her estate and named it after Andree Clark, a sister who died of meningitis in 1919.

In her younger days, Huguette Clark was mentioned in society columns but soon faded from public view. She became a public figure — unwillingly — at the age of 103.

It was then that reports by MSNBC.com raised questions about the handling of her estate.

Prompted by the news stories, three distant relatives told a New York judge that Clark's advisors had exerted "improper influence" over her. They pointed to a $1.5-million donation she made to an Israeli settlement in the disputed West Bank, where her attorney's daughter lived with her family. They also expressed concern over her accountant's guilty plea to charges that he had emailed pornography to teenage girls.

The judge denied their request for a guardian. Bock and Kamsler, who have not been charged with any crimes, denied any wrongdoing, including accusations that they tried to get themselves named in her will. In court papers, Bock cast the family members as opportunists.

None of the relatives, he said, had any contact with Huguette Clark until she was 95 — and that was only to seek funds for upkeep of a family mausoleum.

They were "officious interlopers," he wrote, "virtual strangers … with whom Ms. Clark has knowingly and assiduously avoided contact for decades."

Clark was married in 1928 to William MacDonald Gower, a son of one of her father's business associates. They divorced in 1930. She had no children and outlived her six brothers and sisters.
Posted by Mercury at 3:31 PM