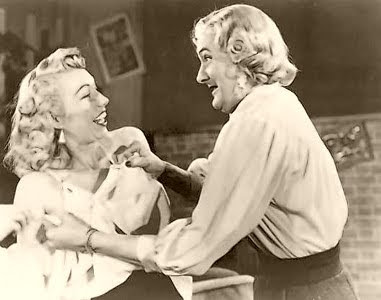 Dolores Fuller, left, and Ed Wood from the 1953 film Glen or Glenda. Fuller later said she didn't know Wood was a cross-dresser when they started dating.

Years after starring in her boyfriend's low-budget films 'Glen or Glenda' and 'Jail Bait,' Fuller became something of a cult icon. She also co-wrote several Elvis Presley movie songs, and founded a record company.

Los Angeles Times
Dolores Fuller, the onetime actress-girlfriend of cross-dressing schlock movie director Ed Wood who co-starred with Wood in his low-budget 1950s cult classic "Glen or Glenda," has died. She was 88.

Fuller, whose show business career included writing the lyrics to a dozen Elvis Presley movie songs, died Monday at her home in Las Vegas after a long illness, said her stepdaughter, Susan Chamberlin.

As the former girlfriend and two-time leading lady for the legendary filmmaker who came to be known as the world's worst movie director, Fuller became something of a cult figure herself in her later years.

At the time, Fuller was caught up in the flurry of publicity surrounding the release of director Tim Burton's biopic "Ed Wood," starring Johnny Depp as the eccentric D-movie director and Sarah Jessica Parker as Fuller.

"Not in my wildest nightmares did I ever think I'd see the day when Eddie's movies would be popular," said Fuller, who was in Kansas City to appear at an Ed Wood Film Festival.

She was a bit movie player, a model on TV's "Queen for a Day" and Dinah Shore's stand-in on the star's musical TV show when she responded to a casting call and met Wood in late 1952.

"When I got to the casting call and first laid eyes on the young Edward, I just thought he was extremely handsome, and his personality was bubbly and fun," Fuller recalled in a 1994 interview with Tom Weaver for Fangoria magazine.

"Then when I found out he was also a director and writer as well as a producer and actor, I was very impressed. … I knew immediately that he liked me, too."

The divorced Fuller soon moved in with Wood, who cast her in "Glen or Glenda," the 1953 film in which she played the fiancee of Wood's secret cross-dresser who has a passion for angora sweaters.

Fuller said in the Fangoria interview that she "didn't know Eddie was a transvestite when we first got together — even the first year, I didn't know."

Her first clue, she said, "was when he was writing one evening and we were having a glass of wine together, and he said he'd like to borrow my white angora sweater.

"I said, 'Why do you want to borrow it?' and he said, 'Well, it helps me write, I feel so much more comfortable. I hate men's hard clothes, I like soft, cuddly things. It makes my creative juices flow!' Well, we were all alone and I saw no harm in it. … That was my first inkling that maybe he had a fetish. But I didn't realize it went any further."

When she saw the final version of "Glen or Glenda," with Wood in a wig and women's clothing, she said, "I wanted to crawl under the seat!"

Fuller, who described herself as the "breadwinner" while she and Wood lived together, went on to star in his 1954 crime thriller "Jail Bait." She also had a small part in his 1955 horror film "Bride of the Monster."

Wood had written that movie for her to play the female lead, but then gave it to another actress. That, combined with his drinking, led Fuller to split up with him in 1955, according to the Fangoria article.

She moved to New York, where she studied with Stella Adler at the Actors Studio. "I decided I needed lessons after seeing Ed's films," she told the Kansas City Star.

She was born March 10, 1923, in South Bend, Ind., and moved to California when she was 10. Her family was staying in a motel in El Monte when she had her first brush with Hollywood, as a background extra in Frank Capra's "It Happened One Night," which was shooting at the motel.

Fuller, who began modeling at 16, chronicled her life in her 2009 autobiography, "A Fuller Life: Hollywood, Ed Wood and Me."

The New York Times
Dolores Fuller, the muse, girlfriend, leading lady and involuntary costumer of Ed Wood Jr., the cross-dressing writer and director of films so awful they have a stupefying, apocalyptic beauty, died on Monday at her home in Las Vegas. She was 88.

The cause was complications of a stroke, her stepdaughter, Susan Chamberlin, said.

It was Ms. Fuller, or more precisely Ms. Fuller’s sweater, that launched one of Mr. Wood’s most memorable movies, “Glen or Glenda” (1953). The plot centers on a man (played by Mr. Wood) who informs his fiancée (Ms. Fuller) that he likes to wear women’s clothing.

Ms. Fuller was played by Sarah Jessica Parker in the 1994 film “Ed Wood,” directed by Tim Burton and starring Johnny Depp as Mr. Wood. That movie also stars Martin Landau, who won an Oscar for his portrayal of Bela Lugosi, who acted in “Glen or Glenda” and other Wood pictures.

After her relationship with Mr. Wood ended in the mid-1950s, Ms. Fuller worked as a songwriter. Her credits include many numbers for Elvis Presley films, among them “Rock-a-Hula Baby” (with Benjamin Weisman and Fred Wise), from “Blue Hawaii,” and “Do the Clam” (with Mr. Weisman and Sid Wayne), from “Girl Happy.”

Dolores Agnes Eble was born on March 10, 1923, in South Bend, Ind., and moved with her family to California as a child. Her first, accidental film appearance was as an extra in Frank Capra’s “It Happened One Night” (1934), which was shooting at the motel in which her family stayed on arriving.

As a young woman, Ms. Fuller found work in television. She was Dinah Shore’s stand-in on “The Dinah Shore Chevy Show” and a regular model on “Queen for a Day,” where she demonstrated the soft pleasures of Gustinette slippers. She also made a few uncredited appearances in big-screen films.

Then, one fateful day in the early ’50s, she answered a casting call from Mr. Wood and became, in a manner of speaking, a star.

“I guess he interviewed a lot of young actresses, but I came in with an angora sweater, and he loved angora,” Ms. Fuller recalled in a video interview posted on YouTube. During their romance, she later said, she became accustomed to his wearing the sweater for relaxation. She never imagined, though, that its inexorable hold over Mr. Wood would eventually be disclosed to the moviegoing public.

In the film’s best-known scene, which endures as a monument to high camp, Mr. Wood confesses his sartorial longings to Ms. Fuller, prompting her to peel off the sweater, a white angora number, and cede it to him with a look of resigned disgust.

He next gave Ms. Fuller a leading role in “Jail Bait” (1954), a tale of crime, plastic surgery and other things that featured the bodybuilder Steve Reeves; she later played a smaller part in his “Bride of the Monster” (1955).

Ms. Fuller was married and divorced several times. Besides her stepdaughter, survivors include her husband, Philip Chamberlin; a son, Don Fuller; and three grandchildren. Another son, Darrel Fuller, died in 2004.

She also appears in the 1994 documentary “Ed Wood: Look Back in Angora.” 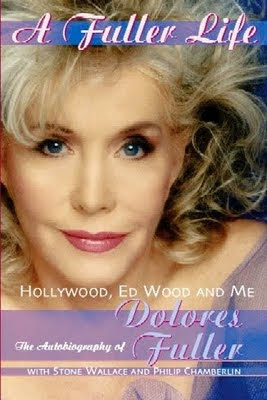 A Fuller Life: Hollywood, Ed Wood, and Me