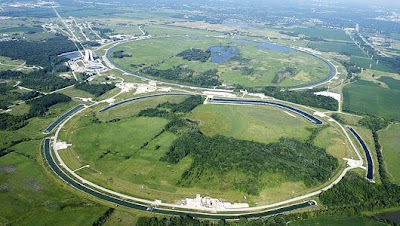 The New York Times
When scientists at the Fermi National Accelerator Laboratory announced last month that they might have discovered a new elementary particle or fundamental force of nature, it was likely the swan song of the lab’s Tevatron accelerator, once the most powerful atom-smasher in the world.

That title now belongs to the Large Hadron Collider in Switzerland, which is designed to generate seven times Tevatron’s peak energy. Scientists hope the $10 billion accelerator will take them closer to understanding both the micro world of subatomic particles and the origins of the universe and its likely future.

With the 25-year-old Tevatron scheduled to shut down in September, Fermilab in Batavia, one of the Chicago area’s premier research institutions with a budget of almost $400 million, will narrow its focus to less expensive experiments as it explores other uncharted areas of physics.

With the accelerator shut down and the workload shrinking, Fermilab is expected to cut about 5 percent of its work force of 1,900 over the next few years.

Until now, much of Fermilab’s work has involved whirling protons and antiprotons at nearly the speed of light around its circular accelerator toward a collision that simulated the high-energy conditions of the early universe. Scientists study the spray of subatomic particles given off by the impact in hopes of observing new ones. Because the Large Hadron Collider can create much more energetic collisions, scientists have taken their search for the next batch of elusive particles to Switzerland.

Doug Glenzinski, who heads one of the two collider detectors at Fermilab, said about a third of the 600 professors, students and staff members working on his detector had left over the past three years and that many academics now directed their graduate students to the L.H.C., not Fermilab.

“The number of people who are involved in experiments here is noticeably down,” Mr. Glenzinski said. Fermi’s future experiments will focus on creating the greatest number of particles, not necessarily the most energetic ones. Scientists plan to create dense, relatively low-energy beams of neutrinos, little-understood particles that have almost no mass, no electrical charge and other quirky properties.

“After photons,” the particles responsible for light, “neutrinos are the most pervasive particles in the universe,” Mr. Oddone said. “You have billions passing through you all the time, but because they’re so elusive, we don’t really understand how they behave.”

Physicists think neutrino experiments could help explain the very existence of the universe. After the Big Bang, scientists believe, there were equal amounts of matter and antimatter, but now there is far more matter.

“The way the mathematics works out, neutrinos have to have very heavy partners, which were created in the early universe but decayed away,” said Milind Diwan, of Brookhaven National Laboratory in New York. They may have decayed asymmetrically, creating more matter and less antimatter. “Neutrinos are like an imprint we have access to.”

Fermilab has been studying neutrinos for more than a decade and has additional projects in various stages of development, including one that would create the world’s most intense neutrino beam. If approved by the Department of Energy, the $1 billion Long Baseline Neutrino Experiment is expected to start collecting data by 2020. Architects of the neutrino experiments say their work will be narrower than the Tevatron’s but will create just as much scientific output, and they won’t have to wait to find the subject of their study.

“There’s a difference between doing lots of studies that may look for some hypothetical particles, and actual discoveries,”. said Bob Svoboda, a physics professor at the University of California, Davis, and one of the project’s leaders. “In our case, we know neutrinos exist.”

Mr. Diwan, the other project leader, played down the differences between neutrino and accelerator research, although neutrino physicists will eventually outnumber those who work on atomic colliders.

“Culturally, it’s not going to be different,” said Mr. Diwan. “It’s not like all of a sudden we’re going to be shooting rockets instead of particles.”
Posted by Mercury at 8:50 AM