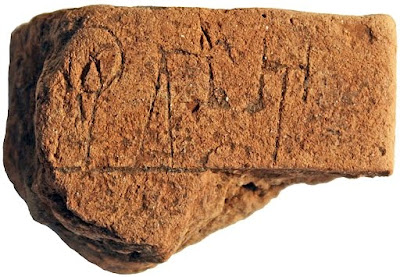 A 2-inch-by-3-inch clay tablet is older than expected — dating to 3,350 years ago — and is found at a site in Greece where researchers did not expect to find writing.

Los Angeles Times
Archaeologists have found a clay tablet bearing the earliest known writing in Europe, a 3,350-year-old specimen, which makes it at least 150 years older than other known tablets from the region.

Found in one of the palaces linked to Greece's King Nestor of Trojan War fame, the tablet not only is older than expected, but also appears at a site, called Iklaina, where researchers did not expect to find writing, said its discoverer, Michael Cosmopoulos of the University of Missouri-St. Louis.

The tablet, fortuitously preserved when someone discarded it in a trash pit and burned it, was part of the state's formal record-keeping process, and its discovery sheds light on early state formation, Cosmopoulos said.

Archaeologists "had grown more and more comfortable" with the idea that writing was limited to the major ruling centers of the time and was not to be found at secondary sites such as Iklaina, which was the equivalent of a district capital, said archaeologist Thomas Palaima of the University of Texas at Austin, who was not involved in the research.

"It was a great surprise and a welcome surprise" to find writing at a secondary center, he said.

Iklaina, which dates to the Mycenaean period of 1500 BC to 1100 BC, sits at the southwestern corner of Greece. It was an independent state until about 1400 BC, when it was conquered by King Nestor, who incorporated it into his kingdom, which he ruled from the nearby city of Pylos. Overall, 16 states were brought under his rule.

Only one of them, Nichoria, has been previously studied, and no tablets were found there.

Cosmopoulos has been excavating at Iklaina for 11 years. Among other things, he has found evidence of a Mycenaean palace with elaborate architecture, colorful murals and a drainage system with clay pipes that was far ahead of its time. The architecture included what are known as Cyclopean walls, which are constructed of crude limestone boulders fitted roughly together, with smaller chunks placed between them.

Cosmopoulos did not expect to find tablets because they were not meant to survive. "They were never meant to last for more than a year," he said. "Then they were recycled." The tablets were allowed to dry in the sun, which made them very brittle. But the tablet they found had been accidentally broken and thrown in a garbage pit, then burned, which fired the clay, preserving it.

The tablet measures 2 inches by 3 inches and has writing on both sides in the Linear B system, which is older than the alphabet. It consists of about 87 signs and was used primarily for keeping track of property. On the front of the tablet is a verb that relates to some sort of manufacturing. On the back are what appear to be men's names alongside numbers.

The presence of the tablet at Iklaina, Palaima said, suggests two possibilities. It may indicate that Iklaina was once a major center of its own and had the potential to become a dominant center until it was crushed and absorbed by Pylos.

But it could also be that, even after Iklaina became part of Nestor's kingdom, it was allowed to retain a significant amount of administrative freedom. That would be surprising, Palaima said, because most historians believe that virtually all record-keeping was centralized in the major centers. If the city was allowed to retain record-keeping, it would suggest that Pylos maintained a benevolent rule over its domain.

The findings will be published this month in the Proceedings of the Athens Archaeological Society.
Posted by Mercury at 4:33 PM