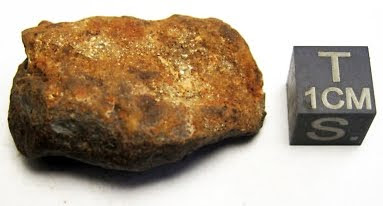 The New York Times
Ebay and other Web sites pulse with hundreds of sales pitches. “The pieces below have an exceptional patina,” a site called Star-bits.com said of 10 pictured fragments.

The ads are for chunks of meteorites, bits of asteroids that have fallen from the sky and are as prized by scientists as they are by collectors. As more meteorites have been discovered in recent years, interest in them has flourished and an illegal sales market has boomed — much to the dismay of the people who want to study them and the countries that consider them national treasures.

“It’s a black market,” said Ralph P. Harvey, a geologist at Case Western Reserve University who directs the federal search for meteorites in Antarctica. “It’s as organized as any drug trade and just as illegal.”

The discovery of a rich and historically significant meteorite crater in southern Egypt, just north of the Sudanese border, has shown the voracious appetite for new fragments. Just as scientists appeared to be on the cusp of decrypting the evidence to solve an ancient puzzle, looters plundered the desolate site, and the political chaos in Egypt seems to ensure that the scientists will not be going back anytime soon.

The mystery began thousands of years ago with Egyptian hieroglyphs, which refer to the “iron of heaven.” Archaeologists have long debated whether the Egyptians made artifacts from iron meteorites that fell to Earth in fiery upheavals. The main evidence came from ancient knife blades of iron that had high concentrations of nickel — a rare element in the Earth’s crust that was considered a signature of extraterrestrial origin.

But doubts grew as investigators found terrestrial sites rich in nickel that ancient peoples could have mined. And scientists in Egypt never found an impact crater and a nearby lode of meteorites.

Then in June 2008, Vincenzo de Michele, an Italian mineralogist and former curator at the Natural History Museum of Milan who had explored the Egyptian desert for nearly two decades, was scanning the area on Google Earth when he saw something unusual.

He told Mario Di Martino of the Italian National Institute for Astrophysics in Turin, and together they formed an expedition that surveyed the site in February 2009. To their delight, the desolate area bristled with iron meteorites — more than 5,000 of them — and they named the crater Gebel Kamil, after a nearby mountain.

The team members signed a note of discovery and put it in a bottle at the crater’s bottom. The find was a first. It was the only meteorite crater ever discovered in Egypt — its mouth 15o feet wide — and the team vowed to keep it confidential as long as possible.

But a return expedition in February 2010, found that the bottle had disappeared. The secret was out.

A few months later, in June, meteorites from the crater were for sale at a show in Ensisheim, France. In a review, the International Meteorite Collectors Association called them arguably the world’s “most fascinating new iron find.” The Egyptian rocks, it added, “received a lot of attention.”

Popular or not, the meteorites were taboo. In Egypt and elsewhere, scientists say, it is illegal without a permit to remove meteorites from a country.

Yet scavengers have disseminated them widely: on Star-bits.com, one of many sites that sell a variety of meteorites, the 10 fragments with rich patinas are said to be from Gebel Kamil. The costliest of the 10 — a two-pound rock, just large enough to cover the fingers of a man’s hand — is priced at $1,600.

Eric Olson of Star-bits defended the marketing as legitimate and beyond Egyptian law. “I didn’t buy them from the Egyptians,” he said in an interview. “I bought them second- and thirdhand.”

The scientists say they have relatively few samples compared with the booming illicit sales.

“We have at our disposal a very limited number of specimens to study and exhibit,” said Dr. Di Martino. He and other members of the Gebel Kamil crater discovery team, he added, don’t have the money to buy them on the flourishing black market.

Dr. Harvey of Case Western Reserve said the quandary applied to the scientific community as a whole. The rampant looting of meteorite sites and skyrocketing prices for the fragments, he said, “dramatically reduce who can get samples to do the research.”

The black market has exploded in size mainly because of a rush of new meteorites arriving from North Africa and the Arabian Peninsula. Starting in the late 1980s and 1990s, explorers and nomads discovered that dark-colored meteorites stood out against flat, featureless areas covered by sand and small pebbles. And dry desert air helped preserve the rocks from space.

The pace of collecting began to soar after explorers scrutinizing the sands of Libya discovered a number of meteorites from the Moon and Mars. These rare types formed during cosmic smashups, eventually fell to Earth and fetched high prices.

The collectors association, founded in 2004 in Nevada, now has hundreds of members around the globe. And while some traders deal in legitimate exports, many do not.

One buyer expressed remorse after reading about scientific angst over the thriving market. “I’m very ashamed,” the buyer wrote on a blog. “I’m surely a part of the problem.”

Still, many collectors defend the hobby as advantageous for scientists, saying the market is producing many discoveries and creating many opportunities. Amateurs often turn to experts for analysis and authentication and, in return, share the extraterrestrial haul.

“The scientists do not have time to go hunt for their own meteorites, so somebody has to do it for them,” said Anne M. Black, president of the collectors association. “It’s common sense.”

Even some scientists applaud the new market.

“I see it as a good thing on balance,” said Carl B. Agee, director of the Institute of Meteoritics at the University of New Mexico. “It’s beneficial mainly because of the huge diversity of meteorites not previously known about and not accessible.”

At stake for science in the rush for meteorites are secrets of the cosmic bombardment, the development of the solar system and possible clues to the existence of extraterrestrial life. Last month, scientists hotly debated whether a new meteorite study produced convincing evidence of microscopic aliens.

As for the Gebel Kamil crater, Dr. Di Martino said it was futile to try to save its otherworldly riches from the looters.

“Considering the social, political and geographic situation there,” he said of the remote corner of southwestern Egypt, “it will be completely useless to protect the area” — unless the authorities put in “a permanent garrison of marines and/or a minefield.”

He and the team of scientific explorers are still eager to revisit the site, mainly to better date the crater. But they worry that the political chaos in Egypt may further endanger their find.

The turmoil has already resulted in the delay and possible cancellation of a new expedition to the Kamil crater and raised doubts about the security of a collection of the meteorites in Cairo.

With the secret out, the scientific team announced its discovery in July 2010 and detailed its findings in the February issue of Geology.

There, the team hailed the discovery as a potential link to the “iron of heaven” and estimated the impact site as less than 5,000 years old.

Luigi Folco, the expedition leader and meteorite curator at the University of Siena, said in an interview that if the age estimate is correct, “ancient Egyptians living along the Nile could have seen this major event.” The craggy rock from space is said to have exploded with the blinding flash of an enormous bomb.

Dr. Di Martino said the allure for amateurs was not the advance of history but the pleasure of owning the latest find.

“Being a new meteorite,” he said, “the collectors like to have a piece of it.”
Posted by Mercury at 4:40 PM