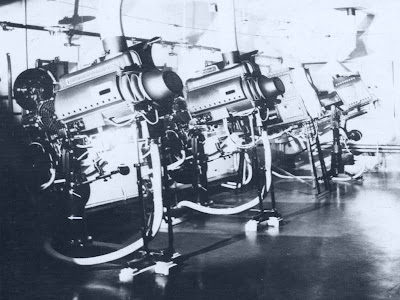 Film prints may become unavailable in 2013 and financing for digital projection technology is winding down, but installation costs are still prohibitive for many of the smallest movie houses.

Los Angeles Times
For more than three decades, the Kim family has operated a popular 800-seat neighborhood theater on Crenshaw Boulevard in Gardena.

The single-screen movie house — a rarity anywhere — has weathered multiple storms. It thrived in the 1970s and early 1980s by specializing in Spanish-language movies, until its Mexican film distributor went out of business. The Kims switched to screening conventional Hollywood movies, but soon confronted growing competition from new multiplexes. They adapted by selling lower-priced tickets, catering to budget-conscious families looking for an affordable night out.

Now they face what could be their biggest hurdle: how to foot the bill for a new digital projection system.

"We've been investigating converting to digital, but it's cost prohibitive for us," said Judy Kim, an attorney who manages Gardena Cinema for her parents, who are in their 70s. "You're talking about tens of thousands of dollars for a machine, and you're not sure it's worth putting in that kind of money or whether you're going to get a return on your investment."

After years of delays, the century-old movie exhibition business is finally embracing digital technology. Equipment suppliers can barely keep up with the demand. About 800 to 900 digital screens are being added each month to theaters large and small nationwide, allowing them to screen 3-D movies, beam live sporting and music events and deliver sharper, scratch free images to audiences.

But hundreds of small theater operators such as the Kims have yet to get with the digital program — and may be left out if they don't act soon.

"The pressure is on," said Greg Laemmle, president of Laemmle Theatres, the L.A.-based art house movie chain that is weighing how many digital projectors to install at its eight locations. "We're going to have to jump."

To assist theaters in making the leap, studios are helping to pay for the equipment through so-called virtual print fees. In lieu of making and delivering 35-millimeter film prints — which cost about $1,000 each versus $100 to $200 for a digital print — studios are putting aside the money they save to help theaters buy the equipment they need to convert to digital projection systems.

But that financing is winding down. Under agreements with studios, exhibitors can qualify for the funding only if they install their digital equipment by the end of next year. Film prints — the reels that are threaded through projectors — could become unavailable as early as 2013, according to the National Assn. of Theatre Owners.

With digital distribution, a hard-drive copy of a movie is shipped to the theater, where it is inserted into a server that operates the projection system. In some cases, movies are also transmitted digitally via satellite.

Overseas, theater operators also are rapidly converting to digital, although studios are expected to continue shipping film prints to some smaller countries for the foreseeable future.

Nearly half of all 39,000 screens in the U.S. are digital, up from just a few thousand in 2007. By year's end, about 23,000 digital screens will have been installed, mostly from expansion by the three largest theater chains: AMC Entertainment Inc., Regal Entertainment Group and Cinemark Holdings Inc. A consortium representing the circuits raised nearly $900 million to finance the rollout.

Despite the rapid expansion, Fithian is nonetheless concerned that several hundred smaller exhibitors — those with 10 or fewer screens — have held off installing digital equipment.

"We've been telling exhibitors for four years that this is coming," Fithian said in an interview. "We don't want people to be left behind."

There are 650 theater companies in the U.S. and Canada with fewer than 100 screens, including 270 with just one screen. Some of these smaller operators believe film won't disappear any time soon. Others can't afford the investment. Digital projectors and accompanying computer hardware and software cost about $65,000 per screen. That doesn't include an additional $4,000 to $8,000 for a special silver screen, which is required on some systems, and approximately $10,000 to $20,000 more for 3-D equipment.

Making such a hefty investment is intimidating to small operators, especially at a time when business has fallen off sharply. Box-office revenue and admissions have dropped more than 20% this year from 2010. Adding to the anxiety are fears that studios will further induce moviegoers to stay away from theaters by offering movies in the home just 60 days after their box-office debuts.

"It's disconcerting that they are really pushing us to spend a lot of money on digital at a time when they are tinkering with the traditional business model, which could jeopardize our business," said David Corwin, president of Metropolitan Theatres Corp., which is investing $5 million to finish converting its 101 screens in the Western U.S. and British Columbia to digital.

"The bottom line is that financing is available to everyone in one way or the other," said Chuck Goldwater, president of Cinedigm's media services group. "What we tell exhibitors is that the clock is ticking."

Some theater owners, however, said they can't shoulder more debt.

Jeff Mexico, who owns a drive-in theater and two cinemas in Salem, Ore., said he was paying down a $200,000 loan he took out to refurbish one of his theaters in 2006 and can't afford to borrow more money.

"I'm just at a point where I can't take on any more debt," he said.

Yet Mexico said he knows he may not have a choice because film may not be around much longer. A stark reminder of that came recently when a distributor told him he couldn't book "Source Code," the action thriller starring Jake Gyllenhaal.