Martin Rees and the Templeton prize 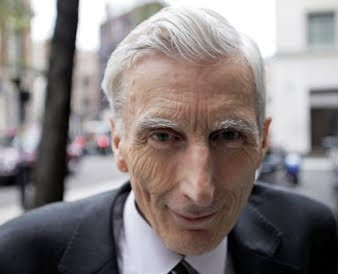 "Martin Rees and the Templeton prize: why are the atheists so cross?"

It should be a happy story – top boffin gives correct answer to question: would you like £1m, no strings attached? Instead, a shower of abuse descends upon his head

guardian.co.uk
Good news for us slowcoaches this morning. Brilliant scientists at some of our great seats of learning, men whose lives are devoted to the rational pursuit of knowledge, turn out to be capable of as much intolerance and stupidity as the rest of us.

What have they done this time? They've hurled abuse and reproach on Lord Rees of Ludlow – the astronomer royal and recent past president of the Royal Society – for accepting a £1m prize from a body called the Templeton Foundation, whose website you can check out here.

Ian Sample's chat with Rees is here, and Rees's acceptance speech (all this happened on Tuesday) is here.

"From big bang to big bucks", as the headline writer wittily put it. It should be a happy story: top boffin gives correct answer to no-brainer question – "Would you like £1m, no strings attached?" – without having to phone a friend. Instead, a meteor shower of abuse descends upon his head.

I'm more puzzled by this kind of abusive behaviour than I am surprised. Deep down, we all know that great men of science can be as petty and spiteful – Bill Bryson's Short History of Nearly Everything sets it out with gusto – as politicians, footballers or captains of industry.

Sir John Templeton (1912-2008) doesn't sound like one of those, mind you. He was an American, a successful Wall Street investor (here's his bio) who made a pile of money and set up his foundation to promote what the foundation's slogan describes as "supporting science – investing in the big questions."

As far as I can see, there's no suggestion he made his money as a crack dealer or a trader in sex slaves. What upsets part of the scientific community – needless to say, Oxford's most militant atheist, Richard Dawkins, is part of the chorus – is their belief that Templeton, an enthusiastic Presbyterian, tries to blur the boundary between science and religion, making a virtue of belief without evidence.

Well, well, that's pretty serious. Belief without evidence, eh? I was having a drink only last night with a chap who left the pub early to go home and catch the Manchester United v Chelsea game. He did so in the evidence-free (and misplaced) belief that Chelsea would win. We all do things like that, don't we?

Rees himself declined to discuss the matter on Radio 4's Today programme. But he did take issue with the Dawkinsites – "professional atheists" he called them – for risking the possibility that a pious young Muslim who is forced to choose between God and Charles Darwin will reject science in favour of faith.

The enjoyably funny part of all this is that Rees himself admits to being a non-believer, albeit one who sometimes goes to church and has a good time there.

He's born and bred CoE and admires the gentle traditions of the Anglican church which are, incidentally, under attack from wild-eyed and intolerant evangelical Anglicans as well as from papists and atheists.

All sorts of friends and colleagues are cross. Nobel laureate Professor Sir Harry Kroto writes in reproachful terms in today's Times about how the sneaky Templeton folk "using enormous amounts of money as their lure" (well spotted, Harry) try to promote religion which he describes as "congenital wishful thinking".

To qualify for the prize, all you have to do is say there is no conflict between science and religion, protests the prof. He wants Rees to hand over the wonga to the British Humanist Association.

I hope he doesn't. What a waste! Take Lady R on a nice cruise, at the very least take her on a shopping spree in that nice new Cambridge mall before you do that, Marty.

It's true that dubious characters like Billy Graham and Mother Theresa have received the Templeton prize since its inception in 1974. But so, apparently, did the former Dominican priest and molecular biologist, Francisco Ayala, who advised Bill Clinton on how to overturn a law in his native Arkansas that would have allowed schools to teach creationism in science classes.

I'd have thought that instance alone would have given Kroto and his kind cause for reflection. But no, Jerry Coyne, a University of Chicago biologist, says Templeton "wants to make faith a virtue". They're trying to protect Rees and impressionable souls from such wickedness.

Apart from the fact that there is plenty of non-religious nonsense people can believe in – astrology, Chelsea FC, the Sun newspaper – I'd have expected the blowhards to have enough respect for Rees to let him sort this out unaided. He does hold the Order of Merit, one of the very few British honours still untainted by the usual stuff.

If that wasn't enough, you might think that heavyweight scientists might remember the intolerance that marked the history of their own trade in the modern era.

From the 17th century until the 20th, they had to be wary of publishing conclusions which explicitly challenged the existence of a deity. You could lose your livelihood, or worse, if you were suspected of atheism. Surely we are not now so arrogant that we are tempted to reverse the proof?

In any case, many of our greatest scientists – Darwin, Michael Faraday, Isaac Newton – were men of faith. If Newton, perhaps the greatest scientific mind in history, could reconcile faith and reason ("Gravity is God") Rees should be able to sleep soundly, cheque in hand.


Great idea from Martin Rees on space exploration and man

For more on the Templeton Prize, just enter same in the blog's search engine.
Posted by Mercury at 10:58 AM