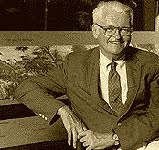 Painted in the Renaissance fresco secco technique, the mural is a work of art that showcases a panorama of the evolutionary history of the earth — from the Devonian Period 362 million years ago to Cretaceous Period 65 million years ago — based on the best scientific knowledge available at the time. The chronology of the mural reads from right to left and spans more than 300 million years, with the large foreground trees marking the boundaries between the geologic periods.

Zallinger’s portrayal of the prehistoric plants and animals was innovative for its time, showing them in natural, realistic landscapes, the result of the collaboration of the artist with the most preeminent paleontologists, paleobotanists, biologists and geologists of that day. In 1949 Zallinger received the Pulitzer Award for Painting in recognition of his work on The Age of Reptiles.

The Zallinger Murals at the Yale Peabody Museum
Posted by Mercury at 1:53 PM