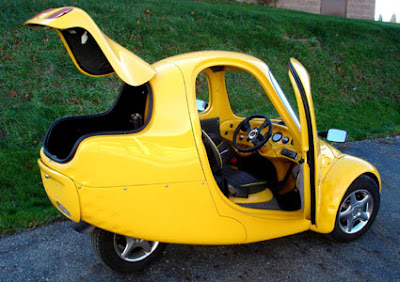 The article suggests that electric vehicles are the wave of the future. Granted, better batteries will be developed but it will not have that great of an impact with the general public. Just consider the number of people that do not have access to an electrical outlet like apartment dwellers. Extension cords everywhere. People will steal them for the copper; people could trip over them; kids could be injured by them; people could plug into another's outlet. Not a good idea. Perhaps it could be beneficial for government vehicles, public transportation, cargo trucks.

"A123 Systems goes public with a splash"

Associated Press via Argonne Labs
Investors snapped up shares of A123 Systems in their debut Thursday, showing willingness to overlook millions of dollars in losses and make a bet that next-generation battery technology will propel the cars and trucks of the future.

Watertown, Mass.-based A123 Systems makes lithium-ion batteries, the technology chosen to power General Motor's highly anticipated electric car, the Chevy Volt. A123 lost out on the contract for the Volt but was picked to build batteries for Chrysler's next generation of electric cars.

Founded by Massachusetts Institute of Technology scientists, A123 lost more than $40 million in the first half of this year and seemed to challenge the market's fear of risk. But with the government pressuring automakers to build more fuel-efficient automobiles, investors obviously feel there is money to be made as companies compete to be the suppliers of the next power source for sedans, crossovers and pickups.

A123 Systems Inc. said its lithium-ion battery will provide more power, last longer and operate more safely than other batteries.

The company has been contracted by Chrysler and in August received a $249 million grant from the U.S. Department of Energy, yet critics note the company has never made money and say the clamor for A123 shares is misguided.

Still, it was among the most lucrative first-day IPO's this year on a percentage basis, trailing only software company Opentable Inc. A123's shares gained $6.79, or 50.3 percent, to close at $20.29.

A123's technology is similar to that used in laptops and cell phones. Lithium-ion batteries have been subject to mass recalls by computer companies because of overheating and face an even greater challenge in cars because of the energy required.

"So you end up packing a reactive metal, which is lithium, in a flammable substance very, very close together," said Don Hillebrand, director of the Transportation Research Center at Argonne National Laboratory. "You can do this, and you can do it safely, but it requires a more expensive manufacturing process."

And cost is an obstacle that may be just as daunting. A single battery can cost $40,000, but the payoff could be huge if engineers can tackle the cost.

In addition to the Energy Department grant, A123 has secured $350 million in private capital from investors including General Electric Co. It also landed $100 million in refundable tax credits from the state of Michigan to build a plant.

David Vieau, A123 Systems' president and chief executive, said the company's batteries use MIT technology that achieves a balance between power, life span and safety. The batteries can be shaped and linked to fit into different types and models of vehicles, he said.

"Height and clearance, for example, on a Jeep, is quite a different problem then if you're in a two-seat sports car or if you have a minivan," Vieau said.

The nickel-metal hydride batteries used now in cars like the Toyota Prius must still be paired with a combustion engine. Hydride batteries can give you short bursts of power. Lithium-ion can store more energy, but it's still more delicate and heat is more of a problem.

Hillebrand said nickel-metal hydride is a power battery, not an energy battery, which is why it's good for short-range hybrids.

A123 Systems shares are trading on the Nasdaq Global Market under the ticker symbol "AONE."
Posted by Mercury at 5:04 PM

good points about stealing for the copper as i had not thought of that aspect. people are used to moving not putting so it would have to be a generational thing. electric cars are not going to sweep the nation because of the demand for horse power. they, as noted, will demand a new grid system, good luck

LI ion batteries and electric cars will increase the capacity of the current grid; will act as a sync to be exploited during peak usage.

We wouldn't, necessarily, need to build a new grid to incorporate electric cars. Any car plugged in during peak would act to prevent brown outs by suppling electricity instead of storing in the battery.