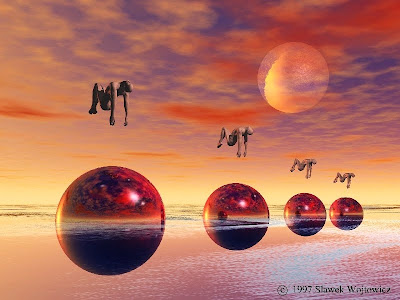 I don't buy this at all.

"Over the past few decades, the idea that our universe could be one of many alternate universes within a giant multiverse has grown from a sci-fi fantasy into a legitimate theoretical possibility. Several theories of physics and astronomy have hypothesized the existence of a multiverse made of many parallel universes. One obvious question that arises, then, is exactly how many of these parallel universes might there be."

PHYSORG.COM
In a new study, Stanford physicists Andrei Linde and Vitaly Vanchurin have calculated the number of all possible universes, coming up with an answer of 10^10^16. If that number sounds large, the scientists explain that it would have been even more humongous, except that we observers are limited in our ability to distinguish more universes; otherwise, there could be as many as 10^10^10^7 universes.

To work these numbers out, Linde and Vanchurin looked back to the time shortly after the Big Bang, which they view as a quantum process that generated lots of quantum fluctuations. Then during the period of inflation, the universe grew rapidly and these quantum fluctuations were "frozen" into classical perturbations in distinct regions. Today, each of these regions could be a different universe, having its own distinct laws of low energy physics.

By analyzing the mechanism (called "slow roll inflation") that initially generated the quantum fluctuations, the scientists could estimate the number of resulting universes at 10^10^10^7 (a number which is dependent on the model they used). However, this number is limited by other factors, specifically by the limits of the human brain. Since the total amount of information that one individual can absorb in a lifetime is about 10^16 bits, which is equivalent to 10^10^16 configurations, this means that a human brain couldn't distinguish more than 10^10^16 universes.

Requiring that the human brain must be able to count the number of parallel universes may seem inappropriate, if not arrogant, but Linde and Vanchurin explain that dealing with the quantum world is different than our everyday lives in which quantum effects can be safely ignored. A crucial part of their calculation here is an investigation of quantum effects on supergalactic scales. In this kind of scenario, the state of the multiverse and observations made by an observer are correlated (similar to the Schrodinger cat experiment, where the outcome can be determined only after it is registered by a classical observer).

As the scientists explain, the calculation of the number of universes is an important step toward an even larger goal: to find the probability of living in a universe with a particular set of properties. What are the chances that we live in a world in which the laws of physics are these laws that we currently observe? Answering this question requires finding probabilities that depend on knowing about other universes, among many other challenges.

How many universes are in the multiverse? by Andrei Linde and Vitaly Vanchurin
Posted by Mercury at 6:45 AM

it is beyond belief that this was carried at Phys.org, it ranks right up there with Scientific American's article that Global Warming would most likely stifle wind speeds making wind turbines less than profitable...or the apparent taking sides in the climate debate by what i used to believe were reputable sources for scientific methodology....or as the kid put it at the end of the hearings for the "Black Socks Scandal", he yelled out "say it ain't so Joe"