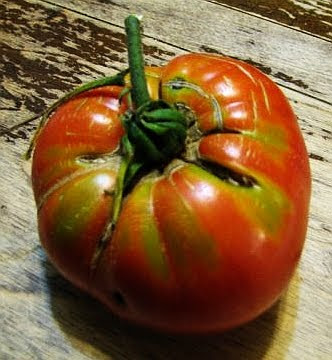 Remember the tired tomato vines at this time of year. Some tomatoes were the size of golf balls and less and some were near ripening...the size of baseballs. And what was done? The vines were ground up and destined for the compost heap while the salvageable tomatoes were placed in a paper bag and set in an area of plentiful sunshine. And what happened? The remaining tomatoes began to ripen to a brilliant red. Why? The release of ethylene which enhance the ripening of a number of fruits and vegetables--even apples. Now a team of chemists have accidentally discovered an interesting combination of ethylene and tin exhibiting catalytic features--all by accident.

"Novel Chemistry for Ethylene and Tin"

UC Davis News and Information
New work by chemists at UC Davis shows that ethylene, a gas that is important both as a hormone that controls fruit ripening and as a raw material in industrial chemistry, can bind reversibly to tin atoms. The research, published Sept. 25 in the journal Science, could have implications for understanding catalytic processes.

Ethylene has long been known to react with transition metals such as iron or copper, but was not thought to react reversibly with metals such as tin or aluminum, said Philip Power, professor of chemistry at UC Davis and senior author on the paper.

"Reversibility is important, because it shows that it could be involved in catalytic processes," Power said.

Catalysts are materials that allow chemical reactions to proceed more efficiently, often by forming a temporary intermediate structure. Catalytic processes are important both in living cells and in industrial chemistry.

Graduate student Yang Peng passed ethylene, at room temperature and normal atmospheric pressure, through a compound made up of two tin atoms bonded to each other and also to rings of carbon atoms. The green tin compound turned yellow in the presence of ethylene, and a new compound could be crystallized out.

Slight heating of the mixture reversed the reaction and released ethylene again.

Power said the result was unexpected, but noted, "you investigate the reactions, and sometimes you find something interesting."

"It's serendipity, but you have to be looking and willing to follow it up," he said.

Power did not foresee an immediate application for the discovery, but said that it would contribute in general to understanding ethylene catalysis. Some plants release ethylene to control fruit ripening, although no known biological molecules include a tin atom. There could be implications for industrial catalysis if similar behavior could be shown for a cheap metal like aluminum, he said.

Also contributing to the work were postdoctoral scientists Xinping Wang and Bobby Ellis, and X-ray crystallographer James Fettinger. The work was funded by the National Science Foundation.


Serendipity again...
Posted by Mercury at 6:13 AM

Email ThisBlogThis!Share to TwitterShare to FacebookShare to Pinterest
Labels: ethylene and tin, Serendipity