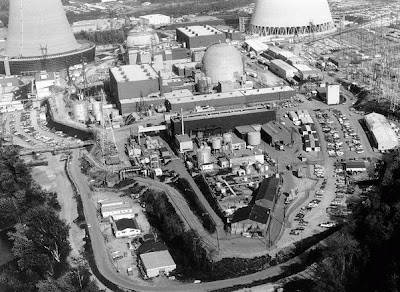 Shippingport nuclear power plant
The first large-scale nuclear powerplant in the world began operating in Shippingport, Pennsylvania, on December 2, 1957--exactly 15 years after Enrico Fermi demonstrated the first sustained nuclear reaction. The Duquesne Light Company of Pittsburgh built and operated the Shippingport plant on a site it owned on the Ohio River. The company also contributed to the cost of developing the government-owned reactor. Three years later, the Shippingport plant began supplying electricity to the Pittsburgh area. The Shippingport nuclear powerplant was retired in 1982. Congress assigned the decontamination and decommissioning of this commercial reactor to DOE. This was the first complete decontamination and decommissioning of a reactor in the United States. The reactor vessel was shipped to a low-level waste disposal facility at the Hanford Site in Richland, Washington. The reactor site was cleaned and released for unrestricted use in November 1987. Government officials proclaimed the seven-acre site is suitable for picnicking or for a children's playground.
Fission is fission whether one uses uranium or thorium. Okay, it reduces the production of plutonium for weapons but still produces waste. It is a short term solution for a long term problem. Hold back on fission reactors and invest in fusion research.

U.S. News & World Report
In the midst of renewed global interest in nuclear energy, a long-overlooked nuclear fuel, thorium, is being re-examined as a potential solution to some of the industry's most daunting problems, including disposal of waste.

Widely available in the sandy beaches of India, Australia, and the United States, among other places, thorium is a naturally occurring, slightly radioactive element that is being heralded by advocates as a safer alternative to uranium that could help limit the production of nuclear waste and prevent nuclear technology from being used for weapons rather than energy.

Though many nuclear scientists have known about thorium's potential for decades—it was briefly used in the 1970s at the first U.S. commercial reactor in Shippingport, Pa.—it never caught on commercially. Today, however, with nearly three dozen nuclear reactors under construction worldwide and plans for at least two dozen more, world leaders are facing mounting pressure to make sure that the nuclear industry's expansion takes place as safely and cleanly as possible.

Could thorium be the solution? Some politicians and businesses hope so. Earlier this month, Nevada Sen. Harry Reid and Utah Sen. Orrin Hatch introduced a bill that would set aside $250 million for research and development of thorium fuels.

Abroad, interest in thorium is even greater. The Indian government publicly has said that it wants to promote new nuclear plants running on thorium to help meet its soaring energy needs. Russia, France, the United Arab Emirates, and many others also have expressed interest.

Proponents say thorium has multiple advantages over uranium fuel. Because it is consumed more slowly in nuclear reactions than uranium, it has the potential to cut the volume of nuclear waste produced in half. Unlike a uranium reaction, a thorium fuel reaction doesn't produce weapons-usable plutonium, which would allay concerns about developing countries pursuing nuclear weapons under the pretext of nuclear energy. And proponents also say that thorium fuel could be used in new and existing reactors without companies having to make major changes to their reactor designs or fork out money for retrofits.

The dilemma of nuclear waste disposal, a longtime political lightning rod, is part of the reason no new nuclear plant has been approved for construction in the United States in some 30 years. The federal government's decades-old plan to build a nuclear waste repository at Yucca Mountain, Nev., remains stuck in limbo, and many observers speculate that the repository will never get built. Thorium would not eliminate the problem but, at least in theory, could reduce the amount of waste that would need disposal.

At the moment, thorium isn't quite ready for commercial use. The research is not yet complete, and approval of thorium fuel by the U.S. government still remains at least several years off. But some surprising international partnerships already are yielding promising developments.

One leading company, Virginia-based Thorium Power, has been working with researchers in Russia since the early 1990s to commercialize thorium (with the blessing of the U.S. government, of course). For the past five years, Thorium Power has been testing its fuel design in a research reactor at Moscow's Kurchatov Institute. Having completed that phase, the company will spend the next six months examining the results, says Thorium Power's CEO, Seth Grae. Over the next few years, it plans to test the fuel in a commercial reactor and, finally, seek approval from the Russian government to market the technology. "A few years ago I would have ticked off several risk factors that are now behind us," Grae said. "This is now at a very advanced stage."

According to the World Nuclear Association, however, there are some technical and financial hurdles that need to be resolved. There is a small concern, for instance, that the type of uranium that is formed in the reaction, if it were to be isolated, could still be used to make weapons.

If by "waste" you mean fission products then yes, thorium fission (or more specifically U233 fission) does produce them but most decay to stability very quickly and there is a large variety of uses for them, see:

It would become evident that light water reactors, liquid-salt reactors, and the like would have to be retooled and converted into liquid fluoride thorium reactors. Would this be cost effective...the cost diminished by the use of thorium? Would the costs be passed on to consumers again in higher kilowatt expense? I have yet to see a paper document listing the total costs of thorium mining and refining [even existing open-air deposits associated with fluoride tailings from phosphate mining] and retooling [or even new construction] of existing reactors. Sure, there would be less waste [and environmentally friendly] but would the over all expense be way too much for the consumer to carry?