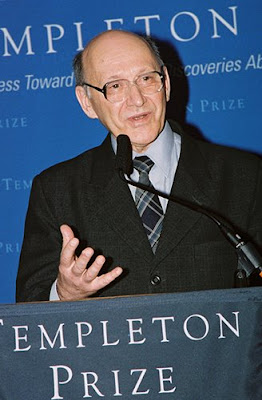 Science & Religion Today
Back in March, when he won the 2008 Templeton Prize (valued at more than 1.6 million dollars), Michael Heller, a Polish cosmologist and Catholic priest, said he would give all the money to endow what he called the "Copernicus Center" in Krakow, Poland. The center, a joint venture between Jagiellonian University and the Pontifical Academy of Theology in Krakow, would be dedicated to studying the relationship between science and religion as an academic discipline.

The Copernicus Center for Interdisciplinary Studies is now officially open—funded in large part by Heller. Research will focus on interactions among theology, philosophy, and science (including astronomy, cosmology, biology, mathematics, physics, and the history of science), and the center will organize lectures and public seminars, and publish two monograph series and a yearbook called For Philosophy and Science (in both English and Polish). The center has already established 12 research teams studying various topics related to science and religion.

October 2nd, 2008
The Copernicus Center for Interdisciplinary Studies, funded in large part by 2008 Templeton Prize Laureate, Professor Michael Heller, was formally opened today at a ceremony in the Collegium Maius of the Jagiellonian University in Krakow, Poland.

The Center, a joint venture between the Jagiellonian University and the Pontifical Academy of Theology in Krakow, was established to further research and education in science and theology as an academic discipline.

Joining the festivities were Professor Heller and Charles L. Harper, Jr., D.Phil., Senior Executive Vice President of the John Templeton Foundation, which awards the Prize. Subsequently, the agreement between the two universities establishing the Copernicus Center was officially signed.

The Templeton Prize, valued in 2008 at 820,000 pounds sterling, more than $1.6 million,was awarded to Polish cosmologist and Catholic priest Michael Heller at Buckingham Palace in London on May 7th. Heller announced his plans to dedicate the Prize, the world's largest annual monetary award given to an individual, to the creation of the Copernicus Center at a March 12th news conference in New York City.

Thursday's inauguration kicked off a two-day conference organized jointly by the Faculty of Physics, Astronomy and Applied Informatics of the Jagiellonian University and the Faculty of Philosophy of the Pontifical Academy of Theology. The conference theme, "Whether science will replace religion," will be examined by distinguished Polish scholars from various disciplines including mathematics, physics, biology, philosophy, theology, and law.

Research at the Copernicus Center will focus on mutual relations among theology, science, and philosophy, including astronomy and cosmology, biology, mathematics, physics, and the history of science. The Center will organize course lectures, public lectures, and seminars, and publish two monograph series and a yearbook, For Philosophy and Science, in English and Polish.

To date, research teams established within the Center include:

In a nutshell, Intelligent design/creationism is not only cherry-picked science, it is faulty theology as well. Startling as it may seem, by continually protesting that “blind” chance could only lead to “accidental evolution”, all denialist forms of creationism contradict the Bible's clear teachings that chance occurrence in the universe (randomness), is always under God's direct control!...Oops!:

It's called: "Intelligent Design Rules Out God's Sovereignty Over Chance"