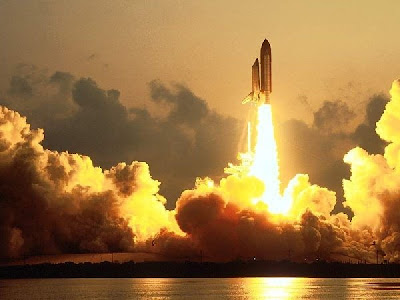 I suppose this can be view as a good thing and a bad thing for the technological supremacy over the past 50 years or so achieved by the United States will probably succumb to global interests from other countries like Russia and China. Prestige is lost but now there is a community of participants and that is a good thing. The current world economy will hurt the quantity of participation of all the players but it is important to highlight the world "players". More players are better and no one country should hold all the bag of marbles in the game of space exploration.


"One Way Up: U.S. Space Plan Relies on Russia"

The New York Times
STAR CITY, Russia - This place was once no place, a secret military base northeast of Moscow that did not show up on maps. The Soviet Union trained its astronauts here to fight on the highest battlefield of the cold war: space.

Yet these days, Star City is the place for America's hard-won orbital partnership with Russia, where astronauts train to fly aboard Soyuz spacecraft. And in two years Star City will be the only place to send astronauts from any nation to the International Space Station.

The gap is coming: from 2010, when the National Aeronautics and Space Administration shuts down the space shuttle program, to 2015, when the next generation of American spacecraft is scheduled to arrive, NASA expects to have no human flight capacity and will depend on Russia to get to the $100 billion station, buying seats on Soyuz craft as space tourists do.

As NASA celebrates its 50th anniversary this month, the time lag in the Bush administration's plan to retire the nation’s three space shuttles and work on a return to the Moon has thrust the United States space program squarely into national politics and geopolitical controversy.

Senators John McCain and Barack Obama have denounced the gap and promoted their commitment to the space program while on trips to Florida, where thousands of workers will lose their jobs when the shuttle program ends. And antagonism between the United States and Russia, over the conflict in Georgia and other issues, is clouding the future of a 15-year partnership in space, precisely when NASA will be more reliant on Russia than ever before.

The administrator of NASA, Michael D. Griffin, has called the situation "unseemly in the extreme." In an e-mail message he sent to his top advisers in August, Dr. Griffin wrote that "events have unfolded in a way that makes it clear how unwise it was for the U.S. to adopt a policy of deliberate dependence on another power."

Dr. Griffin is worried enough that he ordered his staff to explore flying the aging shuttles past 2010. He did so, he said in an interview last month, "about five minutes after the Russians invaded Georgia, because I could see this coming." But he warned that any extension would be costly and could further delay NASA's return to the Moon and threaten America's role as the leading space power.

Last month, China made the third successful launching of its Shenzhou VII spacecraft and the first spacewalk by one of its astronauts. The Chinese government has said it hopes to establish a space station and eventually make a Moon landing. The United States plans to return to the Moon by 2020 at the earliest; some observers believe China might get there first.

The interruption in American-controlled access to space rankles some in Washington, including Senator Bill Nelson of Florida, a leading proponent of the space program. In an interview, Mr. Nelson said it was "inexcusable" for the country's space program to be put in a position of dependence on such a politically volatile partner. "We've got a Russian prime minister who believes he's czar," he said of Vladimir Putin, referring to Russia's military action in Georgia.

The United States has had periods in which its astronauts could not reach space: from the end of the Apollo program in 1975 to the beginning of shuttle flights in 1981, and for more than two years after the loss of the shuttles Challenger in 1986 and Columbia in 2003. But the coming interval could be the longest if the rollout of NASA's new rockets is significantly delayed.

Even though the outlines of the gap have been known since soon after Dr. Griffin began running the agency in 2005, Cmdr. Scott J. Kelly of the Navy, an astronaut who has made two trips to orbit, warned in April that the prospect of a United States that could not send humans into space on its own rockets would come as a shock. "A large part of the American public is going to be surprised," he said, adding that people would cry, "Who let that happen?"

The Bush administration chose to give up the nation's own access to space for five years and move to the next phase of space travel. The administration decided to retire the shuttles and in January 2004 announced a sweeping "vision for space exploration."

Under the plan, NASA would stop using the aging and risky shuttle fleet and move to a new launching program, Constellation, built around Ares rockets and Orion capsules that are designed to return astronauts to the Moon and even to explore near-Earth asteroids and Mars.

To get from one program to the other without inflating NASA's $17 billion annual budget, the administration decided to wind down the shuttle program and ramp up Constellation. The decision has always been portrayed as difficult, but in recent months, criticism has flared. The Republican and Democratic presidential candidates, for example, have pledged to keep America flying.

"As president, I will act to ensure our astronauts will continue to explore space, and not just by hitching a ride with someone else," Mr. McCain said in a statement this year. Mr. Obama has criticized what he has called the "poor planning and inadequate funding" that have led to the situation.

Both candidates say NASA should explore the continuation of the shuttle program for at least one additional flight and try to speed up the development of Constellation with more financing.

Any new money, though, would come too late to greatly shorten the development time for the new craft. "It is essentially unfixable now," Dr. Griffin said. His growing frustration was clear in his e-mail message to aides on Aug. 18, which included the order to study the additional flights.

"In a rational world, we would have been allowed to pick a shuttle retirement date to be consistent with Ares/Orion availability," Dr. Griffin wrote. Within the administration, he wrote, "retiring the shuttle is a jihad rather than an engineering and program management decision."

After the message was published by The Orlando Sentinel, Dr. Griffin issued a statement saying his message had failed "to provide the contextual framework for my remarks, and my support for the administration’s policies."

At the time, legislation vital to NASA's gap plans - permission by Congress to buy Soyuz seats after 2011 - was stalled by the furor over the Russian action in Georgia. That problem was resolved last month when Congress quietly granted approval, but the broader issues presented by the gap remain. And Dr. Griffin's concerns do not end with Russia and Washington politics. He has repeatedly warned that China's space program is moving forward rapidly.

In testimony to the Senate last year, Dr. Griffin said it was likely that "China will be able to put people on the Moon before we will be able to get back." That prospect concerns Representative Tom Feeney, Republican of Florida. A fellow congressman recently suggested naming the first new lunar base after Neil Armstrong. Mr. Feeney recalled responding, "What makes you think the Chinese are going to give us permission to name their base after one of our astronauts?"

The growing tension with Russia complicates a longstanding international alliance in space that helped defuse the cold war, especially among those who had served at the front lines.

William M. Shepherd, the first commander of the station and a former member of the Navy Seals, recalled that when he and his crewmate Yuri Gidzenko first orbited the Earth, the two cold warriors pointed to bases where, years before, they had trained and waited on alert.

"I realized at that moment we were not an American and a Russian any more," Mr. Shepherd said. "It was about something that transcended that whole canvas."

The partnership began in the 1990s, as the Soviet Union and its economy collapsed and Russian knowledge about carrying people into orbit - or bombs to distant destinations - was at risk of falling into the hands of hostile nations. In paying to help keep the Russian space program going, the logic went, the United States would limit arms proliferation. By the mid-1990s Americans began serving aboard the Mir space station as the United States and Russia planned what would become the International Space Station.

The early days were marked by wariness. Mark Bowman, an early contract employee in Russia who is now back in Moscow as a NASA representative, said that Korolev, where mission control is, "was a closed city" when he arrived in 1993. "Foreigners were not allowed here," Mr. Bowman said.

These days, teams of NASA workers live year round in Russia and dozens of others come through for training runs, launchings and landings. "I'd venture to say the people who work at NASA know the Russians better than any other branch of our government," Commander Kelly, the astronaut, said.

Susan Eisenhower, an expert on United States-Russia relations and the space programs, said the Russians proved after the loss of the shuttle Columbia that they would hold up their end of the bargain by continuing to take Americans to the station. "When we had no choice because of the shuttle failure the Russian could have blackmailed us around this tragedy and did not do so," Ms. Eisenhower said.

Vitaly Davidov, the deputy director of Roscosmos, the Russian space agency, said in an interview at mission control that Russia would honor its commitments to fly crews to the station.

That does not mean the going will be easy. The United States and Russia are at loggerheads over many trade and political issues. But Michael Krepon, who helped found the Henry L. Stimson Center, a policy institute, said that while the Russian space monopoly created risk, "there is a longstanding etiquette: you do not mess with the safety of humans in space."

"I don't think this is going to get very ugly if the gap problem continues," Mr. Krepon said. "But it will become expensive."
Posted by Mercury at 4:07 PM