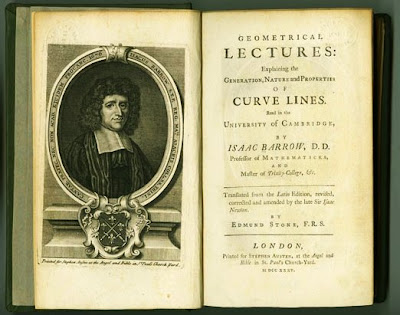 This is the title page to the English version of Isaac Barrow's Geometrical Lectures, which were originally given in his position as Lucasian Professor of Mathematics at Cambridge University. These lectures contain one of the earliest statements and proofs of what is today known as the fundamental theorem of calculus.
Stephen Hawking will retire next year and a replacement must be found. So, if you think you qualify, then read the application .

"So you want to succeed Stephen Hawking?"

physicsworld.com
Now here’s a job that very few physicists can possibly have a chance of securing.

The University of Cambridge is inviting applications for the position of Lucasian professor of mathematics to succeed Stephen Hawking, who is set to retire next year at the age of 67.

According to the 22 October issue of the Cambridge University Reporter, candidates should be "working on mathematics applied to the physical world, with strong preference for the broad area of theoretical physics". The successful candidate is expected to take up the appointment in October next year.

Quite who will get the job is anyone's guess. Previous Lucasian professors include Paul Dirac, George Stokes, Charles Babbage, George Airy and, most famously, the great Isaac Newton himself.

Hawking has certainly made the job, created in 1663 by the then Cambridge member of parliament Henry Lucas, one of the most well-known academic positions in the world.

If you fancy following in Hawking's footsteps as the next — and 19th — Lucasian professor, applying for the job sounds fairly easy. All you need to do is submit a CV, list of papers, details of current and future research plans and details of two referees. The deadline is 15 December.

But be warned - Hawking may be retiring but will still be hanging around as "emeritus Lucasian professor". Stepping out of his shadow won't be easy.
Posted by Mercury at 4:58 PM